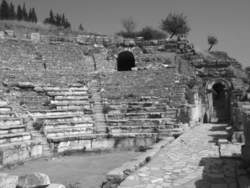 The ruins of a Greek theater in Turkey. The Greeks felt that dreams were very important, and they were to be carefully interpreted in many of their plays.

In ancient Greece, dreams were regarded as messages from the gods, and it was believed that during sleep the soul was freed from the body and was able to perceive and converse with higher beings. The authors of Greek tragedy maintained that dreams of such dignity should be carefully interpreted. Aeschylus, in particular, said that dream interpretation was one of the most important inventions of Prometheus.

One of the primary functions of dreams in Greek tragedy, where a fundamental element is the conflict between fate and individual free will, is to reveal the logic of destiny. Different types of dreams are employed in tragedy and find their origin in a more or less direct imitation of the dreams used by Homer, although there are many differences between the use of the dream device in Homer’s epics and its employment in tragedy.

For instance, with respect to the relations of the poet with his audience, in the epic the narrator is omnipresent and omniscient, even aware of every secret thought of Olympus. By contrast, in tragedy the knowledge of the dramatis personae is limited, as is the knowledge of persons in real life. Thus, the objectivity of the dream must usually correspond to the experiences of the person represented by the actor on the stage.

Divination played the principal role in the tragedies and was the main guide of the plot, with the role of the dream generally being secondary. The dream represented one of many motifs. The tragic poets often used dreams to help dramatize their narratives, even when there was no mention of dreams in the original source material. The dream was often unnecessary to the myth, but was considered a powerful artistic medium through which the poets could guarantee considerable literary effects in the plot.

The first dramatist who successfully employed the dream device was probably Aeschylus, who, like Homer, recognized the importance of the psychological aspects of the dream. In his extant plays there are no indications of the growth of the dream from a less to a more artistic device. In The Persians—which deals with the conflict between Oriental despotism and Greek freedom, and the victory of the Greeks over Xerxes—Atossa, mother of Xerxes, experiences a troublesome allegorical dream after her son’s departure for Greece. This dream, which is considered the most beautiful in Greek literature, has a considerable influence on the plot, finding its model in the dreams of the Iliad and the Odyssey.

The dream plays a secondary, yet very important role in Prometheus vinctus providing the grounds for the meeting of the hero and Io. In Choephoroi the dream, which is sent by the soul of the dead, is employed to produce suspense. In contrast, the objectivity of dreams is emphasized in Eumenides, in which the ghost of Clytemnestra rebukes the sleeping Furies. Here the dream has theatrical effectiveness and assumes considerable importance as a factor in outlining the plot of the tragedy. Some references in Aeschylus to dreams, such as in Septem, Supplices, and Agamemnon, are unimportant, although they are picturesque and happy.

The dream device was sparingly employed by Sophocles. Two brief references to dreams can be found in Oedipus Tyrannus and Acrisius. One fully related dream is introduced in the Electra. Clytemnestra’s allegorical dream is not very important for the independent action of the play, but is fundamental for the portrayal of character. There is no direct reference to any deity as the sender of the dream, which appears to a woman, following the convention of tragedy.

Following the Aeschylean tradition, Euripides adopted the dream device in Hecuba, in which the ghost of Polydorus is portrayed on the stage before the eyes of the audience. The dream has a considerable role in the plot, in which the emotional state of Hecuba under the lash of sorrow and revenge constitutes the main subject. Another important dream is Iphigenia’s dream in Iphigenia in Taurus, in which the oracle of Apollo at Delphi represents the mainspring of the action, as elsewhere in tragedy. In this play the dream, sent to a woman, and the oracle, sent to a man, represent the two leading forces. The elaborate dream, as well as the device of misinterpretation, which leads to a truly tragic situation, is important to the progression of the plot. Among Euripides’s minor references to dreams are those reported in Rhesus, in which the plot parallels an incident from the Iliad. The dream is added to the tale as an embellishment rather than as a necessary part of the story. Dreams also serve as embellishment in other Euripides plays, such as Cyclops, Alcestis, Hercules Furens, Alope, Aeolus, Orestes, Helena, and Meleager.

Feedback
Flashcards & Bookmarks ?
Please log in or register to use Flashcards and Bookmarks. You can also log in with
Flashcards ?
My bookmarks ?
+ Add current page to bookmarks
Mentioned in ?
References in classic literature ?
Did this brutal, blaspheming, drunken bully take revenge on his daughter, like the ruthless fathers of the Greek drama? And when the Genievre had heated his brain, would it not give to his arm, which had been only too well set by Cornelius, even double force?
View in context
It was as if one of the heroes of Greek drama, in the middle of his big scene, had been asked to run round the corner to a provision store.
View in context
The internationally award-winning Izumi Ashizawa will collaborate with Cypriot theatre company Belacqua Theatre to stage Euripides' Bacchae this week, combining the techniques of Japanese Noh theatre and ancient Greek drama.
New interpretation of ancient Greek drama
The College of Lake County Theatre Department will present the Greek drama "Oedipus Rex" at 7:30 p.m.
'Oedipus Rex'
In Greek drama what were the actors who described and commented on the action called?
General Knowledge Quiz
Fear hoplites (Greek warriors) at war with the Persian Empire and enjoy Greek drama, a popular pastime in ancient Greece.
Ancient Greece (Facts and Artefacts)
Written for scholars, students, and general readers, this book will interest anyone who wants to know more about Greek drama in general and Sophocles in particular.
What We Are Reading Today: Sophocles: A Study of His Theater in Its Political and Social Context
Now he has turned his attention to translating "The Oresteia: Agamemnon, Libation Bearers, and The Holy Goddesses" for the benefit of a new generation of appreciative readers in a volume that is especially and unreservedly recommended for both community and academic library Classical Greek Drama collections and supplementary studies lists.
The Oresteia
Tom Weston-Jones, David Gyasi and Jonas Armstrong are among the cast of David Farr's Ancient Greek drama.
SATURDAY 24 March 2018
In Greek drama, what were the actors who described and commented on the action called?
Puzzles
Classicists from Europe, New Zealand, and the US describe the origins of ancient Greek theatre; philanthropic gods in comedy and tragedy; the people in Aeschylus; tragedies; allegory; AristophanesAE comedies; Greek drama beyond Athens in the Eastern Mediterranean; and specific plays, including AeschylusAE Agamemnon, SophoclesAE Ajax, Electra, and Philoctetes, and EuripidesAE Electra and Iphigenia at Aulis.
Theatre World: Critical Perspectives on Greek Tragedy and Comedy
By: Nizar Ahmed CAIRO -- 10 November 2017: The 1999 Greek drama "Eternity and a Day" by director Theo Angelopoulos will be screening during the 10th edition of the Panorama of the European Film Festival on Saturday, November 11.
Introspective Greek drama Eternity and a Day at PEFF