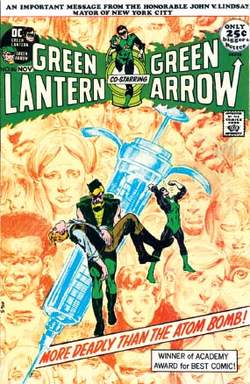 From the very earliest days of superheroes, there have been “super-archers.” While DC Comics’ Green Arrow was not the first, he was certainly the longest-lived. Created by writer Mort Weisinger and artist George Papp, the Green Arrow first appeared in 1941 in More Fun Comics #73, and was from the start a transparent attempt to replicate one of the company’s biggest successes. Like Batman, Green Arrow had a wealthy playboy alter ego (Oliver Queen), a plucky kid sidekick called Speedy (Queen’s ward, Roy Harper), a secret underground workshop beneath his estate, and his own Arrow car, Arrow plane, and Arrow boats. Where Batman had his seemingly limitless utility belt, Green Arrow had an almost inexhaustible supply of gimmicky arrows, including boxing glove, tripwire, lariat, jet, tightrope, and acetylene types. His origin, however, was different from other super-heroes and very straightforward: After being shipwrecked on a desert island, Queen makes himself a bow and over the following months becomes an expert bowman. After saving a ship that anchors offshore, Queen arrives at his purpose in life: “I knew then, in that split-second, that my existence on the island could now serve a useful purpose! When I returned to civilization, I would fight crime with my trick arrows!” Back home, Queen creates a suitably heroic costume and pairs up with young Speedy, who in “real life” as Roy Harper has been trained in archery by Indians and so is himself an expert archer.

The strip was usually well crafted, if a little lacking in personality, but that DC believed in it is clear from its transfer to Adventure Comics, where it ran until 1960. A simultaneous backup slot in World’s Finest Comics lasted several years longer (until 1964). Within a few months of their creation, the intrepid duo were inducted into the Seven Soldiers of Victory in Leading Comics, where they enjoyed rather improbable adventures throughout the war. The Emerald Archer, as he was often called, and Speedy tangled with minor villains like the Wizard, Clock King, and the Rainbow Archer throughout the 1940s and 1950s, but the 1960s superhero boom rather passed them by. With little in the way of character development or depth, Green Arrow had to make do with membership in the Justice League of America, while Speedy joined the Teen Titans. However, by the turn of the decade both archers were to become among the most talked-about heroes in comics.

In late 1969, Green Arrow first gained a new costume and goatee beard (courtesy of artist Neal Adams in The Brave and the Bold #85), and then lost his fortune to a crooked business partner (thanks to writer Denny O’Neil in Justice League #75). In that same issue of Justice League he moved to the ghetto and met the Black Canary, who would become his love interest for the next few decades. Finally, he co-headlined with Green Lantern in a series of comics by O’Neil and Adams that tackled such “relevance” issues as race relations, ecology, politics, business corruption, and drugs, in an award-winning series of strips that generated vast amounts of publicity. Readers now enjoyed an older Oliver Queen—passionate, belligerent, hot-headed, and radical. Here was a character that had gone from a one-dimensional cipher to an embodiment of the Zeitgeist, equal parts hippie, hero, and rabble-rouser. Speedy, on the other hand, personified the era’s darker side as he descended into drug addiction in a story that garnered widespread praise (in Green Lantern/Green Arrow #85 and #86), including an endorsement from New York City’s mayor at the time, John Lindsay.

Despite all this attention, the Green Lantern/Green Arrow partnership lasted only a couple of years, and the archer had to be content with numerous backup features, invariably with Black Canary, in such books as World’s Finest, Action Comics, and The Flash, as well as numerous Justice League comics throughout the 1970s. These shorter tales gradually saw a mellowing of the rhetoric and a penchant for wisecracks emerging in its place, but more recent stories have chronicled a steady descent into darkness. Green Arrow was given his first (short-lived) solo comic in 1983, followed a few years later by Mike Grell’s hard-hitting Longbow Hunters series, which was set in Seattle’s mean streets and featured a harrowing sequence in which the Black Canary was brutally tortured.

The Longbow Hunters went on to a long-running “mature readers only” series that continued in much the same violent, seedy vein and became a big-selling cause célèbre for its grim, violent tone. The Canary and Arrow finally split up and new cast members Shado (a female Japanese assassin) and Eddie Fryes (a sort of dissolute secret agent) were introduced, along with a long-lost—and previously unknown—son, Connor Hawke. As part of its wide-ranging Zero Hour series in the mid-1990s, DC killed off Oliver Queen in an airplane explosion, and Hawke became a new, more youthful Green Arrow. Hawke’s idealism and inexperience breathed new life into the strip, but few doubted that his father would one day return. True to form, in 2001 new writer (and cult film director) Kevin Smith (Clerks, Chasing Amy) duly resurrected him from the dead. Smith was replaced by best-selling author Brad Meltzer and other successors.

The original Green Arrow finally married Black Canary. However, after a villain called Prometheus destroyed much of Green Arrow’s home base, Star City, killing thousands of people, Green Arrow killed him. Green Arrow surrendered to the authorities, but was found not guilty of murder. However, Black Canary put an end to their marriage.

Oliver Queen stars as the title hero in the new ongoing Green Arrow comic book series that launched in September 2011, written by JT Krul and drawn by Dan Jurgens.

Green Arrow, in Neal Adams’ bearded version, appears in many episodes of the animated TV series Justice League Unlimited. Green Arrow also appears in numerous episodes of Batman: The Brave and the Bold, but without the beard, and in the Golden Age version of his costume.

Feedback
Flashcards & Bookmarks ?
Please log in or register to use Flashcards and Bookmarks. You can also log in with
Flashcards ?
My bookmarks ?
+ Add current page to bookmarks
Mentioned in ?
References in periodicals archive ?
The 29-year-old actor recently impressed critics with his depiction of Elton John in 'Rocketman.' He is reportedly being eyed to play Green Arrow by Warner Bros., We Got This Covered said in another June report.
Taron Egerton on playing Wolverine: 'There are probably better candidates'
"Arrow" will end with shortened eighth season, which has led to theories that the Green Arrow could die in the "Crisis on Infinite Earths" crossover.
CW Stars Joke About Shows Ending
The fictional universe began with Arrow, based on the character Green Arrow, which debuted in October 2012.
CW's Arrow to end its run with shortened Season 8; The show spawned The CW's hugely-popular Arrowverse
Left turns off Fabyan get a protected green arrow for a bit but also are allowed when the through signal turns green.
Arrow-only left turns here? Turns: Another problem is that bridge is in the way
In the scene, Green Arrow and Cisco come face to face with Batwoman after she helps foil a prison break at Arkham Asylum.
Here's the first footage of Ruby Rose as Batwoman
From a seminal turn on Superboy and the Legion of Super-Heroes and creating the lost world of the Warlord, to his work on Green Arrow--first relaunching the Green Lantern/Green Arrow series with Denny O'Neil, and later redefining the character in Green Arrow: The Longbow Hunters, Mike Grell made an indelible mark at DC Comics in the 1970s and '80s.
Mike Grell: Life Is Drawing Without An Eraser
He also revitalized other titles as Green Lantern, Green Arrow, and X-Men.
Pop culture heroes expected at Toycon 2018
Chest roenterogram showing a suspicious mass over the left upper thorax (green arrow) with clear lung fields
A Rare Presentation of Anterior Mediastinal Teratoma Mimicking Valvular Heart Disease with A Systolic Murmur
Artist Alley in Des Moines will feature Phil Hester ("The Wretch," "Green Arrow"), Chad Hardin ("Harley Quinn," "Justice League"), Ande Parks ("Green Arrow," Daredevil"), Tom Cook ("Masters of the Universe," "Smurfs"), Eddy Decker ("Far-Out!"), Steve Pulawa ("Aurora Rise," "Patriotica"), Ryan Kinkaid (Zenescope, Big Dog Ink), Brent Woodside (Lucas Arts, Wizards of the Coast), Jim Mehsling ("Star Wars," Topps), Clinton Hobart (Licensed Disney Fine Artist) and many others.
Winston Duke, Matt Ryan, Gregg Sulkin and Nichelle Nichols Are Among the Top Celebrities Scheduled to Attend Wizard World Comic Con Des Moines, June 1-3
Oliver is back as the Green Arrow but there's still a divided team.
When does The Flash return to the UK? Season 4 is back soon on Sky; UK viewers you don't have too long to wait for The CW show to return
Caption: Figure 3: CT axial image shows a large cyst in the right lower lobe representing parenchymal hydatid cyst (yellow arrow); there is also a large cyst with air seen in the left lower lobe representing hydatid cyst in the left lung (green arrow).
Case Report of Hydatid Cyst in the Pulmonary Artery Uncommon Presentation: CT and MRI Findings