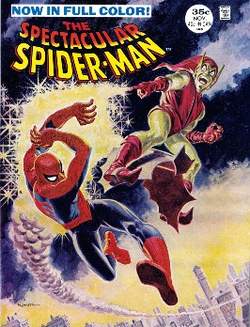 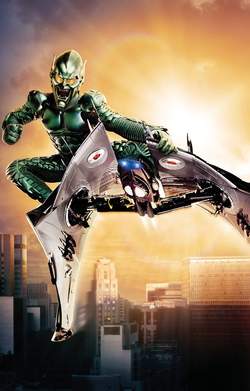 Feedback
Flashcards & Bookmarks ?
Please log in or register to use Flashcards and Bookmarks. You can also log in with
Flashcards ?
My bookmarks ?
+ Add current page to bookmarks
Mentioned in ?
References in periodicals archive ?
And Lot 344, The Amazing Spiderman Volume 1 Issue 14 "The Green Goblin!" marking the first appearance of the Green Goblin in July 1964, fetched PS380.
X-appeal as comics go for thousands; Superheroes snapped up at auction
Hipster Harry Osborn (Dane DeHaan) works well as a friend from Peter's past but not as the next Green Goblin. Jamie Foxx's Electro takes on a nerdy, Jim Carrey/Riddler personality that feels too comic book-ish even for a superhero film, and Paul Giamatti's Rhino isn't even worth mentioning.
All eight Spider-Man movies, ranked from worst to best
Together, they take on a rogues' gallery of villains including Green Goblin (Jorma Taccone) and Doctor Octopus (Kathryn Hahn).
also showing
They join forces to take on villains including Green Goblin (Jorma Taccone) and Doctor Octopus (Kathryn Hahn).
SPIDER-MAN: INTO THE SPIDER-VERSE (PG)
Villains include Liev Schreiber as Wilson Fisk, Kathryn Hahn as Doc Ock, Jorma Taccone as Green Goblin, Joaquin Cosio as Scorpion and Marvin Jones III as Tombstone.
Is Tom Holland In Animated 'Spider-Man' Movie?
Marvel's mightiest heroes face off against some of the most threatening villains in the Marvel Universe including Loki, Nebula, Yondu, Green Goblin, Electro, Rhino, Black Cat and more.
Marvel action heroes make Arena return
Marvel Universe LIVE!will take families on a momentous adventure against the scheming Nebula who teams up with the conniving and loathsome villains Loki and Green Goblin.
Marvel Universe Live! is coming to Echo Arena Liverpool for the first time; Marvel fans will be able to see super heroes such as Spider-Man, The Avengers and the Guardians of the Galaxy
He also helped create Spider-Man villains such characters such as Doctor Octopus, Sandman, the Lizard and Green Goblin.
Stan Lee pays tribute to Steve Ditko
Willem Dafoe, well known for his turn as the Green Goblin in 'Spider-Man', was Oscar-nominated for his roles in 'Platoon', 'Shadow of the Vampire' and 'The Florida Project'.
'Manou the Swift' lands Kate Winslet, Willem Dafoe
1 What comic book publishers created the Green Goblin and Red Skull?
OUR DAILY PUB QUIZ
They finished the frightening fare with a Chill Your Bones Blood Red Velvet Cake and Petrifying Popcorn Balls while sipping on Green Goblin Punch.
Dinner party to die for: murder and mayhem are all in bloody good fun at a Clinton couple's Halloween bash
It is TommyLee who contrives their nocturnal exits from the ward, and the pair re-cast themselves as superheroes, following other great green figures such as Green Hornet, Green Lantern, or (TommyLee being a bully, after all) Green Goblin. The heroic world of comics and cartoons inspires their London exploits, especially when they are joined by a feisty half-Chinese green girl, Koko Kwok.
Cottrell Boyce, Frank: The Astounding Broccoli Boy