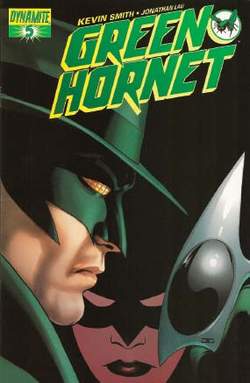 Heroes who operate on both sides of the law have long been popular in comics and crime fiction. Such a character is the masked mystery man called the Green Hornet, a crime fighter who gamboled with gangsters in order to sting them for apprehension.

The Green Hornet and Kato first appeared in a 1936 radio drama produced by George W. Trendle, whose previous program, The Lone Ranger, was a tremendous (and perennial) success. Revisiting The Lone Ranger’s proven formula—an enigmatic masked hero accompanied by a loyal ethnic partner (in the Ranger’s case, his Native American companion, Tonto)—The Green Hornet took the concept one step further, linking the two series into a generational saga. Historians acknowledge radio scriptwriter Fran Striker as the principal creator of the Green Hornet.

The Green Hornet is actually Britt Reid, whose father Dan is the Lone Ranger’s nephew. The Ranger’s penchant for silver bullets (and even his horse’s name) was derived from the family’s silver mine, which dispassionate Britt inherits and begins to squander as a playboy. He picks up a manservant on an excursion to Japan, after rescuing a young man named Kato from peril; Kato returns the favor by dedicating his life to his redeemer. Back in the States, Reid assumes the family business—The Daily Sentinel newspaper, which targets organized crime—and rises beyond his flippancy as he matures into its publisher. On a nighttime jaunt to collect evidence against mobsters for a Sentinel exposé, Reid and chauffeur Kato are spotted at the scene of the crime in their unique sedan—the Black Beauty—and the car is added to the police’s most-wanted list. Reid, abetted by his executive assistant Lenore Case and a handful of confidantes within the police department, preserves his underworld branding by adopting the masked identity of the Green Hornet, and along with Kato, an accomplished martial artist, begins a battle against crime by pretending to be on its side.

The Green Hornet ran on radio for sixteen years, as the hero, clad simply in a trench coat, eyemask, and fedora, used his steel-piercing, vibrating Hornet’s Sting to burst through gangsters’ walls and his Gas Gun to render them unconscious. High-kicking Kato was on hand to karate-chop the crooks his partner didn’t gas. The heroes’ popularity extended beyond the airwaves: They headlined a pair of quickly produced movie serials from Universal Studios—The Green Hornet and The Green Hornet Strikes Again (both 1940)—and a smattering of comic books from publishers Holyoke, Harvey, and Dell. During the 1940s, a handful of Big Little Books written by Striker were published, including The Green Hornet Strikes, The Green Hornet Returns, and The Green Hornet Cracks Down.

By the early 1950s, the buzz around the Green Hornet had faded, and Kato parked the Black Beauty in the garage of pop-culture limbo, until September 1966. The Green Hornet, a weekly live-action television series, premiered that month, courtesy of producer William Dozier, the man responsible for bringing Batman to the tube nine months prior. The show’s handsome lead Van Williams was eclipsed by his two co-stars: in the role of Kato, Asian import Bruce Lee, an accomplished martial artist whose proficiency soon kicked off a series of 1970s kung-fu movies; and the Black Beauty, a customized 1966 Chrysler Imperial Crown brimming with a hornet’s nest of gadgets, including a secret surveillance camera, laser cannon, and smoke screen. The Black Beauty and its costumed occupants were heavily merchandized in the form of trading cards, comic and coloring books, bendable figures, a lunchbox, and miniature cars. Jazz trumpeter Al Hirt’s frenetic “Flight of the Bumblebee” theme was a pop-music hit, but the show was not: The Green Hornet was swatted from the schedule after one season.

It took more than two decades before the Green Hornet and Kato reappeared. In 1989, Now Comics launched The Green Hornet, expanding the legend of both heroes with their sons and daughters assuming their fathers’ legacies. While briefly popular, Now’s Hornet comic books disappeared in late 1994. Since that point, at least two attempts to bring the Green Hornet to the big screen (with George Clooney and Greg Kinnear, respectively, in the title role) have fizzled. In 2004 filmmaker Kevin Smith was hired to write and direct a Green Hornet movie, but Smith ended up dropping out of the project.

Feedback
Flashcards & Bookmarks ?
Please log in or register to use Flashcards and Bookmarks. You can also log in with
Flashcards ?
My bookmarks ?
+ Add current page to bookmarks
Mentioned in ?
References in periodicals archive ?
Chris Pine replaces Seth Rogen ('The Green Hornet', 'Neighbors'), originally tapped to play Cronkite from the beginning of the project in 2017.
Chris Pine set to play journalist Walter Cronkite in 'Newsflash' movie
Black Beauty from The Green Hornet, Drag-U-La from The Munsters, General Lee from The Dukes of Hazzard, The Car from The Car, and the Oldsmobile jalopy from The Beverly Hillbillies all came out of Barris Kustom Industries.
Iconic movie car maker's dragster up for sale
The 12-year-old told authorities "a couple of different stories" about how he got the "Green Hornet" fruit snacks including that he ordered them online and that somebody gave it to him when he was in the school bus, (https://www.nbcnews.com/news/us-news/least-5-florida-middle-school-students-taken-hospital-after-eating-n941866) NBC News reported.
12-Year-Old Charged For Distributing Marijuana-Laced Gummies In School
Chou, who made his Hollywood film debut with Seth Rogen-starrer 'The Green Hornet', is joining Vin Diesel in the project, reports Variety.
Vin Diesel's xXx 4 adds Asian star Jay Chou
he never shoots to kill." The popularity of the Ranger, along with his great horse Silver and his Indian companion Tonto inspired later crime fighting duos like Batman and Robin, and The Green Hornet and Kato.
The Lone Ranger on Radio, Film and Television
Charley waits in his Green Hornet disguise & Aunt
Mustering What's Left
Paramount and Chernin Entertainment have acquired film rights to "The Green Hornet" and hired Gavin O'Connor to direct a feature.
BFDs
It was "The Green Hornet," produced by the team that did the 1966 "Batman" series and starring Van Williams as the emerald-clad avenger secretly posing as a criminal to bring down the most notorious gangsters, racketeers and wrongdoers.
BRBTV Marks 50th Anniversary of "The Green Hornet" TV Series with New Book
The park's biggest attractions, of course, will be the 27 immersive experiences including five exhilirating roller-coaster rides (The Green Hornet, Capitol Bullet Train, Madagascar Mad Pursuit, Dragon Gliders and the Smurfs Village Express), a water ride containing over 793,000 gallons of water, interactive play labs and multimedia theatre - all inspired by 13 Hollywood blockbuster films.
Motiongate: The shape of things to come
The Sony Pictures studio will offer a total of seven attractions themed around blockbusters including Cloudy with a Chance of Meatballs.Ghostbusters, The Green Hornet, Underworld and Zombie Land will also be included.
Movies take centre stage at new Dubai theme park
It is TommyLee who contrives their nocturnal exits from the ward, and the pair re-cast themselves as superheroes, following other great green figures such as Green Hornet, Green Lantern, or (TommyLee being a bully, after all) Green Goblin.
Cottrell Boyce, Frank: The Astounding Broccoli Boy