A decoration on many church buildings throughout Western Europe and the British Isles consists of a hominoid face surrounded by tree branches and leaves, as if someone were peering from the natural world on the human scene. Traced backward, the same form appears on early Christian gravestones and, as early as the second century CE, on pre-Christian monuments memorializing prominent citizens. The figures initially appeared on Christian buildings in the sixth century in Trier, Germany, where the local bishop used some carvings from an abandoned Roman temple to decorate a new cathedral. Repetition of the motif spread gradually over the next century but became quite popular at the beginning of the second millennium CE. In Britain, the figure appears on such diverse buildings as Norwich Cathedral and Rosslyn Chapel, near Edinburgh.

Over the centuries, the meaning originally assigned the figure was forgotten, as was the case with much Pagan lore among the nonliterate peoples of Western Europe, and Christian thinkers began to suggest new Christian meanings for it. Some churchmen like Rabanus Maurus (c. 776–856), the Archbishop of Mainz, who himself oversaw the building and decorating of a number of churches in his archdiocese, suggested the figure recalled the human sins of the flesh and served as a reminder that those perpetrating such sins were eternally doomed.

Today it is assumed that the Green Man, as the figure came to be called, is tied to Pagan reverence for and reliance upon the natural environment. As the motif dropped out of use in church buildings in the years since the Protestant Reformation, a variety of identities have been assigned to the Green Man from Sir Gawain, the green-clad knight in the Arthurian legends, to Robin Hood. Early in the twentieth century, the Green Man was integrated into the May pageants celebrating the beginning of spring. More recently, contemporary Pagans have recovered the Green Man, along with other fragments of ancient Pagan lore and art, as an expression of the male deity and a representation of the cycle of life, death, and rebirth. Pioneer Wiccans Doreen Valiente and E. J. Jones tied the Green Man and Robin Hood together as representations of leaders or practitioners of the Old Religion. 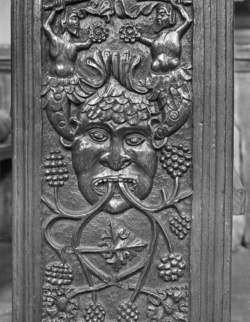 A term sometimes applied to a foliate mask, or representation of the old God of Nature. A wood or stone carving showing a face peering out from a surround of leaves, or as a face actually made up of leaves, it may also be referred to as "Jack i' the Green" or "Robin of the Woods." It symbolizes the spirits of the woods—the flowers, trees and plants. Green is the color generally associated with the fairies.

Throughout Europe there have been—and in many places still are—festivals with parades that feature an appearance by a Green Man—usually a man enclosed in a wickerwork cage completely covered with green boughs. In some areas he is known as Green George. The processions in which he is most often featured are at Beltane (or May Day), since he represents the spirit of vegetation and the coming spring.

Feedback
Flashcards & Bookmarks ?
Please log in or register to use Flashcards and Bookmarks. You can also log in with
Flashcards ?
My bookmarks ?
+ Add current page to bookmarks
Mentioned in ?
References in classic literature ?
The green men were expecting an exodus of a body of red troops from the nearest city gate, and they were lying there in ambush to leap upon them.
Making a considerable detour to avoid the chance of falling into the hands of the green men, I came at last to the great wall.
I knew that the word I brought would prove a splendid passport to Kaol, and I must admit that my caution was due more to my ardent desire to make my way into the city than to avoid a brush with the green men. As much as I enjoy a fight, I cannot always indulge myself, and just now I had more weighty matters to occupy my time than spilling the blood of strange warriors.
As I passed the flank of the waiting green men they saw my eyes turned upon them, and in an instant, knowing that all secrecy was at an end, those nearest me sprang to their feet in an effort to cut me off before I could reach the gate.
I did not slacken my speed an iota as I dashed among them, and as they fell before my blade I could not but recall the happy memory of those other battles when Tars Tarkas, Jeddak of Thark, mightiest of Martian green men, had stood shoulder to shoulder with me through long, hot Martian days, as together we hewed down our enemies until the pile of corpses about us rose higher than a tall man's head.
From the city the red warriors were rushing toward us, and from the jungle the savage horde of green men were coming to meet them.
These Kaolians are most noble fighters, nor are the green men of the equator one whit less warlike than their cold, cruel cousins of the temperate zone.
And then the fight surged upon us once more and we were separated, but my heart's desire was attained, and it was with renewed vigor and a joyous soul that I laid about me with my long-sword until the last of the green men had had enough and had withdrawn toward their distant sea bottom.
View in context
This was my first experience with a Martian watch dog, but it was destined not to be my last, for this fellow guarded me carefully during the time I remained a captive among these green men; twice saving my life, and never voluntarily being away from me a moment.
And it is well that nature has so graciously and abundantly lighted the Martian night, for the green men of Mars, being a nomadic race without high intellectual development, have but crude means for artificial lighting; depending principally upon torches, a kind of candle, and a peculiar oil lamp which generates a gas and burns without a wick.
View in context
She knew, too, that many of them were used now by the nomadic tribes of green men, but that among them all was no city that the red men did not shun, for without exception they stood amidst vast, waterless tracts, unsuited for the continued sustenance of the dominant race of Martians.
View in context
Twelve years had passed since I had read the remarkable manuscript of this remarkable man; this man who remembered no childhood and who could not even offer a vague guess as to his age; who was always young and yet who had dandled my grandfather's great-grandfather upon his knee; this man who had spent ten years upon the planet Mars; who had fought for the green men of Barsoom and fought against them; who had fought for and against the red men and who had won the ever beautiful Dejah Thoris, Princess of Helium, for his wife, and for nearly ten years had been a prince of the house of Tardos Mors, Jeddak of Helium.
View in context