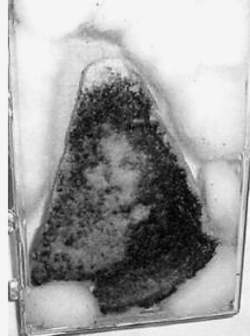 Looking closely and with a little imagination, the burn patterns on this grilled cheese sandwich convinced many that it was a miraculous image of the Virgin Mary. AFP/Getty Images.

Among the more unique and heralded religious phenomena early in the twenty-first century was a grilled cheese sandwich that, the owner claimed, bore an image of the Virgin Mary. The sandwich originated in 1994 when Diana Duyser of Saint Johns, Antigua, made the sandwich and, as she took her first bite, noticed an image of the Virgin Mary staring back at her. She stopped eating and, after examining the sandwich more closely, put it in a box that would remain by her bed for the next decade. She said it had brought her luck during these years, including some $70,000 in winnings from a local casino.

In 2004 she placed the sandwich for sale on the popular Internet auction site eBay. It was purchased for $28,000 by Golden Palace, an Internet gambling site. Golden Palace has a relationship with the Seminole Hard Rock Hotel and Casino in Hollywood, Florida, the site chosen to announce the purchase and the Golden Palace’s plans to take the sandwich and other similar artifacts on a tour from Hollywood to Las Vegas. The sandwich traveled in a “virgin white Cadillac,” and driving the car was Miami Herald reporter Jim Defede, who published a series of tongue-in-cheek articles about his trip.

Although Duyser had done nothing special to preserve the sandwich, it has remained fresh looking and free of mold. It is one of an array of irregularly formed items that people have seen as depicting various personages apart from any human action to produce the representation. Similar objects have included rock surfaces, the swirls in glass, and the knots in trees.

In the wake of the interest shown in the unusual item, some industrious people jumped into the vacuum created by the sale to auction a “Virgin Mary in Grilled Cheese: Make Your Own” kit and a “Virgin Mary in Grilled Cheese Sandwich Replica.” As publicity about the sandwich grew, various merchandizing items appeared, including T-shirts and decals. While the sandwich drew thousands of people to see it, it was, as might be expected, also the subject of much humor.

Feedback
Flashcards & Bookmarks ?
Please log in or register to use Flashcards and Bookmarks. You can also log in with
Flashcards ?
My bookmarks ?
+ Add current page to bookmarks
References in periodicals archive ?
The raclette skillets allow you to traditionally grill cheese until it's mouth-wateringly gooey, ready for scraping onto potatoes, burgers, pasta or anything you fancy.
Lidl selling [pounds sterling]24.99 grill to create the ULTIMATE cheese pull at home; Enough to make dinner party guests and social media followers melt, the snazzy piece of kit is available for only [pounds sterling]24.99
He tweeted: "I have decided to retire from golf soon, so me & my friends @cooperbowles25 & @ChasityBowles & @angieb1433 can start a Grill Cheese shop!!
"I am scared of Heights & the 'Dark & Big Crowds, so Grill Cheese shop will be 1 story high & have lots of lights & a few tables."
That was the tweet that was
Encyclopedia browser ?
Full browser ?
CITE
Site: Follow: Share:
Open / Close