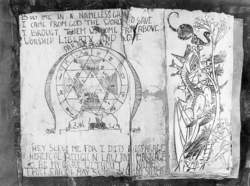 Grimoire, begun prior to 1950, by one of the members of a Rite of Thoth group, in the style of the Book of Shadows. Courtesy Fortean Picture Library.

A book of magic, including spells and conjurations, as used by Ceremonial Magicians. The word comes from the Old French for "grammar." A grimoire contains full, detailed instructions on how to make the required tools, talismans, and robes, as well as calculations for the best time to perform rituals and the rites to perform to actually conjure the entities.

Many grimoires draw heavily on the Kabbalah, cabalistic magic, and astrology. Many also claim to be copies of works used by the biblical king Solomon. Some of the better known grimoires include The Key of Solomon the King, The Lesser Key of Solomon, The Arbatel of Magic, The Heptameron, The Grimoire of Honorius the Great, The Black Pullet, The Pansophy of Rudolph the Magus, and The Book of Sacred Magic of Abra-Melin the Mage.

Of those titles, The Key of Solomon is the best known and the one that is most often referred to and copied from, although it seems extremely unlikely that it actually originated with Solomon himself. However, the book has obviously been revised many times, and some versions of it certainly date from at least the fourteenth century. In fact, there is a Greek version in the British Museum that dates from the thirteenth century. Additionally, there are a number of old grimoires that exist in libraries and private collections throughout Europe and America, although many seem to be nothing more than copies or translations of other copies and translations. Real grimoires were always handwritten by the magician/author, and frequently many parts were written in one of the "secret writings."

The book used by Witches is called the Book of Shadows. Although technically it, too, is a grimoire, it is seldom referred to as such by Wiccans.