(also orbital gyroscope, binormal gyroscope), a gyroscopic device for determining the angle of yaw (deviation from the orbit plane) of an earth satellite. The gyroscopic orbit stabilizer is a free astatic gyroscope in which a restoring moment induced by springs, as well as a damping moment, is applied to the axis of rotation of the outer gimbal ring. The gyroscopic orbit stabilizer resembles a pendulous gyrocompass in its principle of operation, but the function of the pendulum is performed in this case by springs. The instrument (see Figure 1) is mounted in the satellite, which is stabilized with respect to the local vertical in accordance to the signals from the vertical indicator. In this case, if the yaw angle of the satellite is equal to zero, then the rotational axis of the outer gimbal ring is located along the tangent of the orbit, whereas the Oz axis of the gyroscope is located in the direction normal to the orbit. When the axis of the gyroscope deviates from the proper direction, because of the fact that the orbital motion of the satellite represents rotation with an angular velocity ω0 about the axis, which is perpendicular to the orbit, and because of the presence of the springs, moments are generated that tend to make the Oz axis of the gyroscope coincide with the vector ω0. This orientation of the axis is stable. When the satellite develops a yaw angle, the plane of the outer gimbal ring is no longer congruent with the plane of the orbit, and the angle of the satellite’s yaw is determined by the potentiometer mounted on the axis of rotation of the chamber. 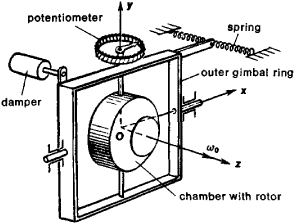 Figure 1. Diagram of a gyroscopic orbit stabilizer: Oxyz is the coordinate system for the chamber.

Other designs for gyroscopic orbit stabilizers exist that are close to the principle of the gyrocompass with indirect correction. In this case, the signal for the correction system is formed on the basis of the vertical indicator data generated within the satellite. The gyroscopic orbit stabilizer is being widely used as a course-controlling instrument that orients the satellite azimuthally relative to the orbital system of coordinates.