A rolled-steel member with an H-shaped cross section with parallel flanges and faces; used for structural columns and piles, due to its ability to withstand rotation; usually square in its outer dimensions. 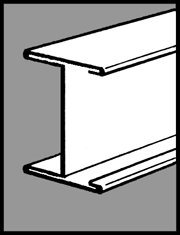 Feedback
Flashcards & Bookmarks ?
Please log in or register to use Flashcards and Bookmarks. You can also log in with
Flashcards ?
My bookmarks ?
+ Add current page to bookmarks
Mentioned in ?
References in periodicals archive ?
Core Products Support Margins: COG's margins for its H-section steel products were resilient despite pressure on selling prices arising from industry-wide production overcapacity.
Fitch Affirms China Oriental at 'BB-'; Outlook Stable
In all cases, the H-section considered is inscribed in a rectangle with a ratio c/b = 2 (see Figure 2), being a section widely used in civil construction as in the case of some bridge decks or as vertical suspension bars.
The absence of gallop for large porosities, say, greater than [phi] = 0.4, can be explained by the fact that the central core of the H-section, without the vertical plates, is a rectangular section with h/c = 0.25 (see Figure 2) which as reported elsewhere is not prone to gallop [4, 21].
Figure 9 shows the root mean square (rms) of the maxima of the dimensionless vertical amplitude, z/b, where z stands for the vertical amplitude and b for the frontal height of the H-section beam, as a function of the reduced velocity, [U.sub.red] = [U.sub.[infinity]]/([omega]b), for zero angle of attack.
Static and dynamic experimental analysis of the galloping stability of porous h-section beams
where [[empty set].sub.c] is the resistance factor (0.9 for H-section and 0.75 for CCFT) and [P.sub.n] denotes the nominal compressive strength.
The maximum diagonal dimension of the H-section in Table 2, including shear studs, is 669 mm because headed studs are typically welded to an H-shaped column in a workshop and then delivered to the field.
Development of an optimum pre-founded column system for top-down construction
The "stable" outlook mirrors Fitch's projection that the company's solid market standing in the H-section products and constant optimisation of its product mix offsets the risk stemming from the intensely competitive Chinese steel market, the agency said.
Fitch sets expected BB+ rating to China Oriental's notes, affirms IDR
Making stained glass involves using coloured glass and lead-came (the H-section that holds glass pieces in position).
Glass Works
I do not know who constructed the statue but apart from the very substantial metal base plate the statue was made of flimsy materials, an undersize H-section girder with light metal tubing and chicken pen wire netting covered in fibre glass.
ANY QUESTIONS: Book resurfaces after news of Titanic trips
"Through expanding its production capacity to over 10 million tonnes per year (mtpa), it is now being recognised as a tier-1 steel producer in Hebei province and a leading H-section steel producer," Lim added.
The "stable" outlook is based on Fitch's projection that the company's strong market standing in H-section products and improved outlook for its cold-rolled products will mitigate margin weakness caused by high raw material costs and intense competition for its basic steel products.
Fitch rates China Oriental at BB+, outlook "stable"