(also the law of rational intercepts), one of the primary laws of crystallography and also one of the first quantitative laws of the atomic-molecular structure of solids.

where OA, OB, and OC are the intercepts formed by face ABC along the coordinate axes (the edges of the crystal) and h, k, and l are three small whole numbers. In crystallography it is accepted practice to describe the edges of a crystal in terms of these numbers (symbols). 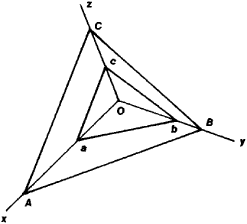 Since the principles governing the periodic distribution of particles in crystals were established, interplanar distances and hence the axial intercepts aA, bB, and cC have been measured from the data obtained by X-ray structural analysis. If the standard selection of coordinate axes developed for crystallography—that is, the natural system of axes, which is determined by the crystal’s symmetry—is used, then the symbols of the faces (hkl), determined on the basis of X-ray structural analysis, coincide to an accuracy of an integral factor with the symbols that are determined on the basis of Haüy’s law of whole numbers according to the slope of the faces of a crystalline polyhedron. The law makes it possible to analytically describe the external shapes of crystals as well as their symmetry and relation to the internal structure.