Ave Maria (äˈvā märēˈä) [Lat.,=hail, Mary], prayer to the Virgin Mary universal among Roman Catholics, also called the Ave, the Hail Mary, and the Angelic Salutation. The words in English are: “Hail Mary, full of grace, the Lord is with thee; blessed art thou amongst women, and blessed is the fruit of thy womb, Jesus. Holy Mary, Mother of God, pray for us sinners now and at the hour of our death. Amen.” The first part is from Luke 1.28,42. The prayer is much used in private as well as in public devotions, e.g., in the rosary. It has many musical settings, the compositions by Franz Schubert and Charles Gounod being especially popular.
The Columbia Electronic Encyclopedia™ Copyright © 2022, Columbia University Press. Licensed from Columbia University Press. All rights reserved. 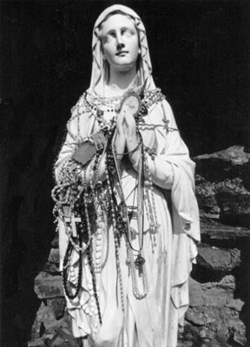