Hand of Glory | Article about Hand of Glory by The Free Dictionary
https://encyclopedia2.thefreedictionary.com/Hand+of+Glory
Printer Friendly 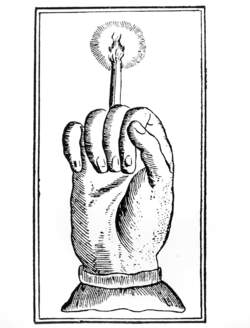 Illustration, from the Albertus Parvus grimoire, of a hand of glory. Courtesy Fortean Picture Library.

The hand of a hanged man, dried and preserved, used in various magical charms and spells. Frequently a lit candle was attached to each extended finger and thumb, or perhaps even the digits themselves were set afire. It was believed that such a burning Hand of Glory would cause the people inside the house where the hand burned to pass into a deep sleep; those already asleep would stay in a deep stupor. While the inhabitants slept, the house would be robbed. It was also believed that a burning Hand of Glory induced all locks to open.

The book Secrets merveilleux de la magie naturelle at cabalistique du Petit Albert (Cologne, 1722) gave full details on how to make a Hand of Glory. It stipulated that the hand, which could be either left or right, had to be cut from a felon hanging from a gibbet. Once severed, the hand was wrapped in part of the funeral pall, having been well squeezed to remove any lingering blood. It was then placed in an earthenware vessel for two weeks with zimat (possibly verdigris), nitre, salt, and long peppers, all well powdered. It was then taken out and exposed to the sunlight until well-dried, preferably during the dog days. If the sun was not strong enough, then the hand could be dried in an oven heated with vervain and fern.

Meanwhile, a candle was made from the fat of the felon, with virgin wax, sesame, and ponie (which may have been horse manure). A single candle was placed in the palm of the hand, or five separate candles could be made and attached to each of the fingers and the thumb.

The book says that the Hand of Glory "would become ineffective, and thieves would not be able to utilize it, if you were to rub the threshold or other parts of the house by which they may enter with an unguent composed of the gall of a black cat, the fat of a white hen, and the blood of a screech owl." The only way to extinguish a Hand of Glory was with milk, as no other liquid would work.

Feedback
Flashcards & Bookmarks ?
Please log in or register to use Flashcards and Bookmarks. You can also log in with
Flashcards ?
My bookmarks ?
+ Add current page to bookmarks
Mentioned in ?
References in periodicals archive ?
As for the 'hand of glory', there is nothing in police files to suggest the hand was deliberately separated.
Just who did 'put Bella in the wych elm'? Author reveals new theory in one of our greatest murder mysteries
Thus the "hand of glory" becomes the instrument of vengeance and revolt against the social hierarchies that have oppressed the poor tailor.
Hand writing: dismembering and re-membering in Nodier, Nerval and Maupassant
She analyzes the "Hand of Glory," a felon's severed, treated, and flaming hand that supposedly rendered the witch invisible.
Dead Hands: Fictions of Agency, Renaissance to Modern
von Goethe's Faust into French and a collection of stories, La Main de gloire (1832; "The Hand of Glory").
Nerval, Gerard de
The crime scene mirrored an ancient ceremony known as 'Hand of Glory' where bones are scattered to the wind.
Could this be the face of 'Bella in THEWYCH Elm'? Mystery murder victim's appearance reconstructed 75 years on
The missing hand, and location of finger bones, mirrored the occult "Hand of Glory" ceremony.
THE SKELETON IN THE WYCH ELM... 'Bella', black magic, Nazi spies - and a wartime murder most foul 'Bella', black magic, Nazi spies - and a wartime murder most foul
It includes the spooky Hand of Glory - the preserved hand and arm of a young child found hidden in a chimney of a local pub in the 1870s; and the cruel Scold's Bridle - used as a punishment for nagging and gossiping women.
Region's history to be revealed
Popular and well-loved items, such as the Hand of Glory and Bayard's Colts, will be put back on permanent display for the first time in many years.
Black Country News: Spotlight on town's past; WALSALL: Museum to feature special exhibition
One gruesome attraction at the event was The Hand of Glory, a preserved child's hand which is normally kept in Walsall Museum and Art Gallery but was loaned out for the day.
Vandals smash headstones in graveyard attack