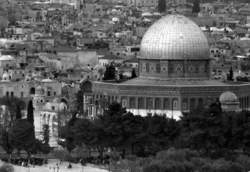 Cragg, Kenneth. The Dome and the Rock, Jerusalem Studies in Islam. London: SPCK, 1964.
Graber, Oleg. The Shape of the Holy: Early Islamic Jerusalem. Princeton, NJ: Princeton University Press, 1996.
Landay, Jerry M., and the Editors of the Newsweek Book Division. The Dome of the Rock. New York: Newsweek, 1976.
Peters, F. E. Jerusalem and Mecca: The Typology of the Holy City in the Near East. New York: New York University Press, 1986.
The Encyclopedia of Religious Phenomena © 2008 Visible Ink Press®. All rights reserved.