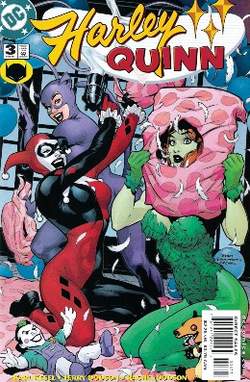 (pop culture)
Harley Quinn, the breakaway character from Batman: The Animated Series (1992–1997), is at heart just a girl who's head over heels for a guy— but in Harley's case, she's “hopelessly in love with a murderous psychopathic clown”: the Joker. She wasn't always a jester-clad, chalk-faced, superhumanly agile moll. Behind the makeup is— actually, was, since her original identity has been lost to her certifiable lunacy—Dr. Harleen Quinzel, a psychiatrist at Arkham Asylum for the Criminally Insane, where Gotham City's malicious madmen are penned and padded-celled after being apprehended by Batman. Quinzel studied the incarcerated Joker's psychotic mind, and was mesmerized by his homicidal tendencies and warped sense of humor. After lending the Joker a helping hand in escaping Arkham, she next lent him her heart, joining her “Puddin'” as the pining princess of plunder, Harley Quinn. You can't blame a girl for falling for the Joker's seductive smile and wicked wit; as Harley says of “Mr. J,” in the voice of actress Arleen Sorkin, “Gee, boss, you really know how to put the fun in funeral.” “Originally, Harley was only supposed to be in one episode,” remarked Batman: The Animated Series (BTAS) writer Paul Dini in a 1994 Cinefantastique interview, “but she was very appealing and she added this other dimension to the Joker; most of his henchpeople are pretty expendable.” Not that the mercurial Clown Prince of Crime hasn't tried to dump her. He's given her the slip, and the slap, and even strapped her to a rocket for a “final” send-off, but she keeps returning for more—or he calls her back (but usually for an ulterior motive), making the Joker and Harley Quinn the ultimate codependent supervillain couple. After her intended one-time outing in BTAS's episode seven, “Joker's Favor” (original airdate: September 11, 1992), Harley kept popping up on the show with and without Mr. J, and has followed him through a variety of subsequent animated series: Superman (1996–2000), The Adventures of Batman & Robin (1997–1999), Static Shock! (2000–2004), and Justice League (2001–2004), as well as the made-for-video animated movie Batman Beyond: Return of the Joker (2000). Harley even rode the Clown Prince of Crime's purple coattails into comic books, first in DC Comics' BTAS tie-ins written and drawn in the “animated” style and later in the darker “real” DC Universe, beginning with the 1999 one-shot Batman: Harley Quinn, then continuing with her own monthly series Harley Quinn, which ran 38 issues from 2000 through 2004. Harley enjoys a Thelma and Louise–like friendship with fellow Bat-rogue Poison Ivy, from whom she received an herbal application that makes her immune to toxins, and adores her pet hyenas, which she affectionately calls her “babies.” She has been the subject of action figures, statues, and even a 2005 limited edition (1,007 produced) hand-painted marionette retailing at $290.95! Not bad for a downhome gal with a wild streak (“Trouble? Don't mind if I do!”) and a dream of one day settling down and raising (demented) kids with her Puddin'. Mia Sara played Dr. Harleen Quinzel in the live-action TV series Birds of Prey (2002–2003). In the concluding moments of season one's final episode she appeared in a modified Harley Quinn costume, but the series' cancellation stalled Sara's Harley.
The Supervillain Book: The Evil Side of Comics and Hollywood © 2006 Visible Ink Press®. All rights reserved.

Feedback
Flashcards & Bookmarks ?
Please log in or register to use Flashcards and Bookmarks. You can also log in with
Flashcards ?
My bookmarks ?
+ Add current page to bookmarks
Mentioned in ?
References in periodicals archive ?
Mariko Tamaki and Steve Pugh (illustrator); HARLEY QUINN; DC Ink (Comics & Graphic Novels: Comics & Graphic Novels) 16.99 ISBN: 9781401283292
Harley Quinn; Breaking Glass
Iron Man, Cat woman, Harley Quinn from New 52 comics and Nightmare Batman all joined in the MCM Manchester Comic Con
Comic Con fans are dead ringers
Ella Jay Basco, daughter of actor-acting coach Derek Basco, nabbed the role of Cassandra Cain in the upcoming movie "Birds Of Prey: And the Fantabulous Emancipation of one Harley Quinn. " This makes her the first actress to do the DC Comics character in a live-action adaptation.
Young Pinay as Batgirl in 'Suicide Squad' spinoff
A fashion catwalk to decide the best dressed pupils was also held, with mother and daughter Zoe and Avais McArthur clinching top prize as Harley Quinn and Violet from the Incredibles.
Comic-con hailed huge success; EDUCATION
Summary: Washington DC [USA], Jun 3 (ANI): The twisted relationship between Harley Quinn and the Joker has been one of the most talked about subjects since Harley was introduced in 'Batman: The Animated Series' in 1992.
DC announces new comic book 'Joker/Harley: Criminal Sanity'
I'm dressed up as Rollo from Vikings and Carrie as (Suicide Squad's) Harley Quinn.
Fans dress to impress in real costume drama
A number of people attended dressed in their favourite cosplay outfits, which included the Joker, Harley Quinn and Deadpool from the DC and Marvel comics and film universes.
Catching fans in comic web
"Birds of Prey (and the Fantabulous Emancipation of One Harley Quinn)" (releases Feb.
DC Movies Coming Soon
The DCEU brought us the filmSuicide Squada few years back fromDavid Ayer, featuring the likes ofWill Smithas Deadshot and, of course,Margot Robbieas break-out character Harley Quinn.
The Suicide Squad UK release date, cast, director, plot; The Suicide Squad is a sequel and soft-reboot to the preceding film - but when is it released in the UK?
* The skins are priced at $24.99 for the Harley Quinn packa nd $19.99 for the Joker pack.
PUBG PS4 Joker and Harley Quinn skins now available
Dazzling Margot Robbie returns as motley supervillain Harley Quinn and instantly stops traffic by holding up a sandwich.
Multicoloured Margot's a Bird of fray
He was dressed as the Caped Crusader, she as his rival Harley Quinn, girlfriend of arch-villain The Joker.
YABBA BABBA DOO!