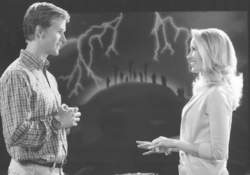 A scene from the television series True Blood.

Charlaine is the popular author of a series of vampire novels set in rural Louisiana that in 2007 were turned into a popular television series, True Blood, on Home Box Office (HBO). The series takes it named from the premise that vampires have been able to become a public segment of human society because they have discovered a substitute for the blood they needed to survive, which is bottled and distributed under the label, True Blood.

Harris was born and raised in Tunica, Mississippi, the daughter of a librarian mother and school principal father. She attended Southwestern (now Rhodes) College in Memphis, and later settled in southern Arkansas with her husband, where she attended writing classes at the University of Missouri-St. Louis. She had begun writing in her youth, but only after settling into family life did she turn to writing novels and find a publisher to accept them for publication. Her first novel appeared in 1981. She later published two successful series before turning to write the Southern Vampire series at the end of the 1990s. The first of the vampire novels, Dead until Dark, appeared in 2001. At least one new novel in the series has appeared annually. The series contained some good storytelling and a raucous sense of humor.

Dead until Dark introduced Sookie Stackhouse, a waitress in a small Louisiana community, Bon Temps, and her vampire mate, Bill Compton, a Civil War veteran who was turned into a vampire as he made his way home at the end of war. Sookie is a telepath who can read people’s minds, an ability setting up numerous situations when their thoughts and their words diverge widely. As the reader is introduced to Sookie, vampires have entered the mainstream, taking a place in contemporary society. They are opposed by some who believe them to be an alien, evil species. They are supported by vampire rights activists. Sookie has a live-and-let-live approach. Then she meets Bill Compton, whose thoughts she cannot read. Around him she can have some peace and quiet. One evening after he had come to the restaurant where she works, she discovered him under attack from some people who wanted to rob him of his blood. Vampire blood is a hot if illegal substance, which has a powerful effect on humans. She saved Bill who had been immobilized under a chain of silver.

The television series follows Sookie Stackhouse (Anna Paquin) as a waitress at Merlotte’s, the restaurant in Bon Temps, owned by Sam Merlotte (Sam Trammell), who turns out to be a shapeshifter. Bill Compton (Stephen Moyer), the handsome 173-year-old vampire has returned to Bon Temps to inherit the family property after his last remaining human relative has died. The main story line of the first season concerned the murders of several women all connected to Sookie’s brother, Jason (Ryan Kwanten), including his grandmother. Three young women—Maudette Pickens, Dawn Green, and Amy Burley—were all strangled shortly after having been alone with Jason. Though Detective Bellefleur had little doubt that Jason was the killer, the town sheriff did not suspect him. Jason’s and Sookie’s grandmother was murdered shortly afterward. At the end of the season it was revealed that Arlene Fowler’s fiance, Rene Lenier, was actually a man named Drew Marshall who created a fake identity and had been killing women he considers “fang-bangers.” The vampire in Harris’s books are organized into a hierarchical society with their own system of laws. Local areas are administered by a sheriff and larger areas by a queen or king. As a whole, the vampires are very traditional. They are bound to the night, have retractable fangs that leave marks on their victims, and have extra (if not extraordinary) strength. Many are good guys, but others are more traditionally bad. Vampires are opposed by the the anti-vampire religious movement called the Fellowship of the Sun.

Subsequent volumes (eight in all as of 2009) in the Sookie Stackhouse saga continue her misadventures as a human telepath working with the vampire community, who prize her ability to find bad guys that try to mess with them. At the same time she develops relations with the werewolf shapeshifters, especially when she has problems with Bill. At the same time, Bill is not the only vampire who finds her attractive.

Harris’s vampire books have been among the most heralded in the paranormal romance field. With the success of the HBO series, it appears that her characters will be making numerous additional appearances. Harris maintains a Internet presence at http://www.charlaineharris.com/.