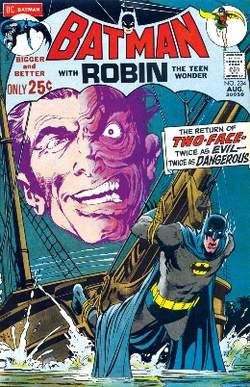 Feedback
Flashcards & Bookmarks ?
Please log in or register to use Flashcards and Bookmarks. You can also log in with
Flashcards ?
My bookmarks ?
+ Add current page to bookmarks
Mentioned in ?
References in periodicals archive ?
The threeyear-old can comfortably defy a 3lb penalty for edging out the useful Harvey Dent at Chester.
day of reckoning
HAMILTON: 1.40 Mia Diva, 2.10 Astrophysics, 2.40 Harvey Dent, 3.10 Dutch Coed, 3.40 Lever Du Soleil, 4.10 New Arrangement, 4.40 Blue Whisper, 5.15 Barney Bullet.
TODAY'S SELECTIONS: DELTA READY TO DELIVER AT CHEPSTOW
But at significantly bigger odds, Astrophysics, Harvey Dent and Barney Bullet are all worth consideration.
Delta to deliver at Chepstow
Without the Joker there would never have been the convergence of Harvey Dent, Batman and Commissioner Gordon to fight crime.
Why we're fascinated by Jeremy Kyle, Katie Hopkins and the like -- Alastair Stewart
Harvey Dent can make it third time lucky in the Ladbrokes Home Of The Odds Boost Novice Median Auction Stakes at Lingfield.
Treacherous would seem a safe bet
Harvey Dent, a close third in the novice auction race at Lingfield, takes his name from Batman's super-villain adversary Two-Face (Harvey Dent).
Attention turns to King George after Scudamore strikes gold on Daklondike
Meanwhile West Indian star Chris Gayle quoted Harvey Dent from The Dark Knight and said, "You either die a hero, or you live long enough to see yourself become the villain." However, AB De Villiers', who will play for the Lahore Qalandars in PSL 4, maintained a note of positivity, pointing out that Umar Akmal in no longer a part of Qalandars.
Mourning hordes bid farewell to AB De Villiers' franchise T20 career
"The performance is also the most interesting thing in the film," Hunter wrote, "and when the Joker is absent, 'The Dark Knight' loses most of its energy and dynamism and becomes nothing but a pretty-boy faceoff between Christian Bale (as Batman) and Aaron Eckhart (as Harvey Dent)."
10 years after its release, 'The Dark Knight' is regarded as a genre-defining classic -- but it wasn't universally embraced by critics back then
To close, I would like to quote Harvey Dent's famous quote from The Dark Knight trilogy: 'The night is darkest just before the dawn.
TRAIN: Enhancing the VATmobile for refunds
Readers familiar with the mythology will meet several familiar faces, from loyal Alfred to technology wizard Lucius Fox to a pre-villainous Harvey Dent. The story is told entirely from Bruce's perspective and is a bit formulaic--astute readers will guess major plot points well ahead of time.
Lu, Marie. Batman: Nightwalker, DC Icons
The question manifests itself most particularly in the personal story of Harvey Dent, a young and courageous district attorney, ready to become the face of decency in Gotham, a White Knight, replacing Batman's Dark Knight.
Nolan's Batman Saga: Realism and Heroism
Sandra Bullock stars in Miss Congeniality 2: Armed and Fabulous The Dark Knight (Sky Cinema Greats, (8.00pm - 10.40pm) The follow-up to Batman Begins, The Dark Knight is set a year after the events of the first film, as with the help of Lt Jim Gordon and District Attorney Harvey Dent, Batman sets out to destroy organised crime in Gotham for good.
YOUR FILM GUIDE