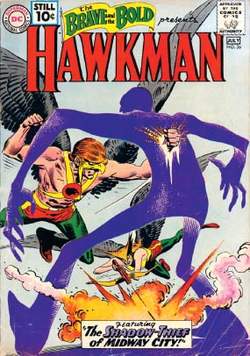 Aregular fixture in the DC Comics universe since his inception in 1940, Hawkman has gone through many changes over the years. The original Hawkman first appeared as a backup feature in Flash Comics #1 but soon graduated to cover status, alternating with the comic’s other star, the Flash. Hawkman was wealthy amateur archaeologist Carter Hall, who discovers that he is actually the reincarnation of Prince Khufu, one half of a pair of legendary ancient Egyptian lovers. Searching out his long-lost love, he comes upon Shiera Saunders; their meeting reactivates their memories of the past. As a result, Hall rediscovers the secret of the “ninth metal,” which he uses to make an antigravity belt, and then dons a shirtless costume, with a hawks’ head mask, and giant, feathered wings. Saunders is aware of Hall’s secret identity from the beginning but has to wait two years before joining her beau (and future husband) as Hawkgirl. Needless to say, she wears a shirt.

The feature was created by the prolific writer Gardner Fox, with art initially by Dennis Neville. The latter was soon replaced by Sheldon Moldoff and subsequently, after World War II, by the teenage prodigy Joe Kubert. It is often said that the character was inspired by a race of Hawkmen prominently featured in the Flash Gordon newspaper strip; true or not, the Hawkman feature proved to be quite a hit in its own right. Hawkman was soon one of the founding members of the Justice Society, later becoming its chairman, and was the only hero to star in all 57 issues of All Star Comics, as well as appearing in more than 100 issues of Flash Comics. While the concept and artwork were strong, critics have noted that the feature lacked depth and had only a few memorable villains, such as the Human Fly Bandits and the Ghost.

Along with many other DC heroes, the original Hawkman last appeared in 1951 and had to wait ten years before being revived as part of the company’s Silver Age (1956–1969) explosion. The new Hawkman was showcased in six issues of The Brave and the Bold, in very impressive tales by the old team of Gardner Fox and Joe Kubert. After a series of backups in Mystery in Space, Hawkman was finally granted his own comic in 1964, though Kubert was then replaced by the elegant Murphy Anderson. As with so many other DC heroes, this new Hawkman was based in science; he was Katar Hol who, along with his wife Shayera, was a policeman from the planet Thanagar, hot on the trail of shape-changing villain Byth. Once on Earth, the pair decided to stay in Midway City, ostensibly to study local police techniques, and they soon settled down to day jobs as museum curators—in between crime-fighting capers as Hawkman and Hawkgirl.

Like their 1940s predecessors, this pair flew with the help of antigravity belts but differed in being able to talk to birds and in their predilection for ancient weapons, such as bows and arrows, borrowed from the museum. They soon amassed a colorful array of foes, such as the Shadow Thief, the IQ Gang, Matter-Master, Lion-Mane, and winged gorillas. However, when Anderson left the comic it soon ran into trouble, ending with issue #27 in 1968. Hawkman joined the Justice League of America in the mid-1960s and was a staple of the team for ten years, but he had to be satisfied with backup slots in various DC comics (and a couple of Showcase issues) throughout the 1970s.

From the mid-1980s on, DC Comics decided that, come what may, there should be a Hawkman comic out there—resulting in seven completely different revivals. At various points in the 1980s and 1990s, the publisher has tried to simplify the increasingly long and complex history of its main stars, often resulting in sheer confusion for their readers, and nowhere has this been more true than in the case of Hawkman. Following two revivals that pitted the Hawks against an imperialist Thanagar bent on invading Earth, a third title, Hawkworld, introduced a different Katar Hol, dressed in a sort of body armor. The success of this miniseries led to a regular title in the 1990s that saw the new Katar and Shayera Hol travel to Earth as escorts to the Thanagarian ambassador; they were soon exiled as traitors.

DC initially intended this Hawkman to supersede the two earlier (revived) versions—which readers were meant to ignore—but soon enough the previous, Silver Age version was back on the scene, rewritten as an impostor. Fans of the hitherto noble and upright Hawkman II had a hard time accepting him as a treacherous spy, and recent writers have tried to forget that unfortunate plot twist. In DC’s Zero Hour series, all previous incarnations are somehow merged together; the new Carter Hall is once more a reincarnation of Prince Khufu, while his partner Kendra Saunders is somehow a reincarnation of Shiera.

Hawkman and Hawkgirl were both killed and then returned to life in the comics series Blackest Night (2009–2010): Hawkgirl was resurrected as Shiera, regaining the memory of all of her past lives. In September 2011, DC Comics launched a new ongoing comics series starring Carter Hall as The Savage Hawkman, written by Tony Daniel and drawn by Philip Tan.

Michael Shanks portrayed Hawkman in various episodes of the live action television series Smallville. Hawkgirl was a regular cast member of the animated series Justice League and Justice League Unlimited, and Hawkman turned up in the latter’s final season. The Golden Age version of Hawkman appeared as a member of the Justice Society in the animated Batman: The Brave and the Bold. Warner Bros. has reportedly been developing a live action Hawkman movie described as “part Indiana Jones/Da Vinci Code, part Ghost.” —DAR & PS

Feedback
Flashcards & Bookmarks ?
Please log in or register to use Flashcards and Bookmarks. You can also log in with
Flashcards ?
My bookmarks ?
+ Add current page to bookmarks
Mentioned in ?
References in periodicals archive ?
Lavishly illustrated with comic book covers and original art, "Rise of the Superheroes" illustratively chronicles: The new frontier of DC Comics, with a revamped Batman, Superman and Wonder Woman, and new characters including Hawkman; Marvel's new comics featuring Thor and The Fantastic Four; The pop art years that saw Batman's "new look" and the TV series; Independent characters, including Fat Fury and T.H.U.N.D.E.R.
Rise of the Superheroes
In addition, their preparation in social studies may be limited (Hawkman, Castro, Bennett, & Barrow, 2015; Passe, 2006; Slekar, 1998) due, in part, to marginalization of elementary social studies (e.g., Heafner & Fitchett, 2012).
LEARNING AND TEACHING IN A VISUAL WORLD: Elementary Teacher Candidates' Use of Visual Materials
"It's been a long time since Hawkman (Falk Hentschel) got stabbed or whatever.
'Legends Of Tomorrow' Season 3: EP Teases Major Character Death
Sending you a massive hug and well wishes." One of the other Good Samaritans who helped Louise was actually ANOTHER superhero - Falk Hentschel, who plays Hawkman in DC's Legends Of Tomorrow.
MY SUPERHERO! Arrow star Colton comes to ill fan's rescue at city hotel
Among those scheduled to attend so far are Stephen Amell, Katie Cassidy, John Barrowman, Colton Haynes, Amy Gumenick, David Ramsey and Emily Bet Rickards from Arrow; Falk Hentschel (who plays Hawkman on Arrow, Flash and Legends of Tomorrow); and Tom Kavanagh, Danielle Panabaker, Peyton List and Keiynan Lonsdale from The Flash.
'Super' events that every geek will love; Do you fancy yourself as a superhero or a super-scientist? Brum is brimming with everything a geek could possibly want, from science shows to comic-cons, including film and TV stars from the worlds of sci-fi and pop culture. Here's David Bentley's list of the fantastic shows and conventions no geek will want to miss
Portland, OR, January 23, 2016 --(PR.com)-- Eisner Award winners Kurt Busiek ("Astro City," "Superman"), Mark Waid ("Irredeemable," "Kingdom Come"), Dean Haspiel (TV show - "Bored to Death" "Billy Dogma"), Bob Camp ("Ren and Stimpy") and Steve Lieber ("Detective Comics," "Hawkman"), as well as standouts Mark Kistler (PBS Television, "The Secret City"), Miguel Sepulveda ("Green Lantern," "Red Lanterns"), Tom Cook ("He-Man," "Superfriends"), Michael Golden ("Batman," "Spider-Man"), Arthur Suydam ("Marvel Zombies" "Army of Darkness") and Phil Ortiz ("The Simpsons," "Muppet Babies") are among the leading comics artists and writers scheduled to attend Wizard World Comic Con Portland, February 19-21.
Busiek, Waid, Valentino, Haspiel Headline Artist Alley at Wizard World Portland, February 19-21
The recruitment process goes by pretty quickly, as Hunter brings together Firestorm (Franz Drameh/Victor Garber), the two-in-one hero; the Atom (Brandon Routh); Hawkgirl (Ciara Renee) and Hawkman (Falk Hentschel); the assassin White Canary (Caity Lotz); and the bad-guy duo Captain Cold and Heat Wave (Wentworth Miller and Dominic Purcell, respectively), who, with their sneering larcenous streaks, are essentially presented as the ill-tempered comic relief.
DC's Legends of Tomorrow
It features Superman, Green Arrow, Cyborg and Hawkman plus a Darkseid figure, assorted weapons and a spaceship, PS44.97, John Lewis
Boys' own; Still looking for that perfect gift for a little lad you know and love? From cool clothes to cracking cars, EMMA JOHNSON offers up a few ideas
It happened by accident at the end of a "Flash Gordon" chapter on WGN's "Saturday Morning Playhouse." The Hawkman, saliva dripping down his chin, wings flapping, cornered a flimsily clad Dale Arden.
Sin makes guilt and guilt makes fear, and fear and guilt make more sin
"Justice League of America" mostly features lesser-known characters, although some - Green Arrow, Hawkman, Catwoman, the Martian Manhunter - are fan favorites.
Should `Roadrunner' be the state's official rock song?
Following his introduction in the November edition of Green Lantern--The New 52--Simon Baz is set to appear next in the February edition of the comic book and will appear in the future alongside some of the comic book world's best known super heroes, Catwoman, Green Arrow and Hawkman.
Is it a plane? No, it's the first Arab American super hero
Hawkman and Enemy Ace, He became an editor at DC Comics in 1968.
Joe Kubert: in memoriam