any species of the genus Crataegus of the family Rosaceae (roserose,
common name for some members of the Rosaceae, a large family of herbs, shrubs, and trees distributed over most of the earth, and for plants of the genus Rosa, the true roses.
..... Click the link for more information.  family), shrubs and trees widely distributed in north temperate climates and especially common in E North America. They usually have thorns, clusters of white (rarely rose-colored) flowers in the spring, and colorful orange, red, or yellow (rarely blue or black) fruits in the fall. The fruits, called haws, resemble tiny apples; some are used in jellies. English hawthorns are of two species, C. oxyacantha and C. monogyna; the common American hawthorn, with bright red haws, is C. coccinea, called scarlet, or red, haw (as are other similar species). Hawthorns are cultivated for ornament and, especially in England, for hedges (haw also means hedge). Hawthorn wood is very hard and is used for such small items as tool handles.

In England, hawthorn flowers are associated with May Day, and the hawthorn (called also may, thorn, haw, whitethorn, and thorn apple) has long been used as a symbol of spring in English poetry. There are many legends surrounding the hawthorn, e.g., that of the Glastonbury thorn (see GlastonburyGlastonbury
, town (1991 pop. 6,751), Somerset, SW England. It has a leather industry, but Glastonbury is famous for its religious associations and many legends. One legend tells that St. Joseph of Arimathea founded the first Christian church in England there.
..... Click the link for more information. , England). A hawthorn is the state flower of Missouri. The black haw is a viburnum (see honeysucklehoneysuckle,
common name for some members of the Caprifoliaceae, a family comprised mostly of vines and shrubs of the Northern Hemisphere, especially abundant in E Asia and E North America.
..... Click the link for more information. ).

Hawthorn is classified in the division MagnoliophytaMagnoliophyta
, division of the plant kingdom consisting of those organisms commonly called the flowering plants, or angiosperms. The angiosperms have leaves, stems, and roots, and vascular, or conducting, tissue (xylem and phloem).
..... Click the link for more information. , class Magnoliopsida, order Rosales, family Rosaceae.

The THORNS are the giveaway. There are over 100 very different varieties. Flowers are usually white, 5 petals, with toothy-edged leaves. Berries ripen in fall. No poisonous lookalikes. You can eat the berries straight off the tree, but don’t eat the seeds. Hawthorn is for the HEART. Antioxidant and bioflavonoid rich, good for cardiovascular system, gentle but powerful, contains numerous phytochemicals that make heart more efficient pump, increasing output of blood from the heart, and decreasing resistance from blood vessels, therefore making it great for both high and low blood pressure, angina, cardiovascular circulation. Hawthorn berry binds to, coats and protects your heart cells. Reduces cardiac arrhythmia (irregular heartbeat) and tachycardia (racing heartbeat). Hawthorn is also good for memory, diarrhea, dysentery, boosts appetite, used for stress, anxiety, nervous palpitations, insomnia, kidney stones, night sweats, menopause. Recognizable by its inch-long thorns all over the branches- sometimes up to 4 inches long! (10cm). Berries start green and end up like bright red rose hips, even tart tasting like rose hips. High in vitamin C, iron and lots of wonderful nutrients. Do not think though, that simply taking hawthorn is going to heal your heart. You need to stop doing the things that caused the problem in the first place. Read the book “Heal Yourself 101” for learning true health.
Edible Plant Guide © 2012 Markus Rothkranz The hawthorn is a small, thorny tree of the rose family that once symbolized hope and was also considered a powerful charm against witches and sorcerers. 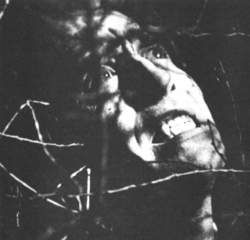 Christopher Lee, as Dracula, suffers a fatal encounter with a hawthorn bush in the film The Satanic Rites of Dracula.

The hawthorn (Crataegus oxyacantha), a small tree of the rose family, was prevalent throughout southern Europe. The plant is also known as the whitethorn and is typical of a number of related thorn bushes (wild mountain rose, blackthorn) that are substituted for hawthorn in different locations. In ancient times, hawthorn was used both as a symbol of hope and as a charm against witchcraft and sorcery. As such, it was often placed in the cradles of infants. As a protection against witchcraft, people might build a barrier of hawthorn around their house or doorway. The Greeks placed pieces of hawthorn in the casements of houses to prevent the entrance of witches. In Bohemia, hawthorn was put on the thresholds of the cow houses, also to prevent witches from entering. The anti-witchcraft use of hawthorn easily transferred to the closely related vampire. The hawthorn united two ancient practices. First, to protect one’s home or another place, people commonly erected a symbolic barrier such as a hawthorn bush. While unable to stop or even slow down the usual physical forces, hawthorn was believed to be capable of blocking intruding supernatural forces or spirits. Second, hawthorn was thought by many to have a sacred quality as it was one of several plants designated as the bush from which Christ’s crown of thorns was made. Hawthorn branches were variously placed on the outside of a coffin, in the corpse’s sock, or on top of the corpse.

In Bosnia, a particular twist to the hawthorn legend developed. When visiting the home where a person had just died, women placed a small piece of hawthorn behind their headcloth, and then threw the twig away on their way home. If the deceased person was a vampire, it would focus its attention upon the hawthorn rather than follow the woman home. According to the Bram Stoker character, Dr. Abraham Van Helsing, a branch of wild rose on the coffin would keep a vampire confined inside. Stoker probably learned of this practice from Emily Gerard. Her book, Land Beyond the Forest (a major source for Dracula [1897]), stated that the people of Transylvania often “lay the thorny branch of a wild rose bush across the body to prevent it from leaving the coffin.” In spite of Stoker’s use of it, the thorn did not attain a prominent role in modern literary and movie vampire lore. The hawthorn made a brief appearance at the end of Hammer Films’s The Satanic Rites of Dracula, in which Christopher Lee as Dracula was destroyed by being trapped in a hawthorn bush.

In addition to the plant’s thorn and bush applications, among the southern Slavs, the wood of the hawthorn or blackthorn was to be used in the stake that impaled the vampire’s corpse. It might be hammered through the head, heart, or stomach.

The Vampire Book, Second Edition © 2011 Visible Ink Press®. All rights reserved.
The following article is from The Great Soviet Encyclopedia (1979). It might be outdated or ideologically biased.

(Crataegus), a genus of shrubs or, more rarely, low trees, of the Rosaceae family.

The shoots as a rule have more or less well-developed thorns (transformed shortened shoots). The leaves range from whole to pinnately lobed and pinnately cut. The flowers are white, more rarely rosy to red, generally collected into cymes or corymb racemes. The ovary is depressed. The fruit (so-called stone apples or stones) are often spheroid, ovoid, or pear-shaped and are usually red, orange brown, or black. There are about 200 (by other criteria, more than 1,000) polymorphous varieties of hawthorn growing wild in the temperate regions of North America and Eurasia.

There are some 50 varieties (plus close to 75 introduced varieties) in the USSR. The fruit of certain hawthorns is edible. The wood is suitable for small articles. Many hawthorns are decorative. Some of them easily survive pruning and are equipped with developed thorns, so that they are used as living fences. Liquid extract from the fruit or tincture from the blossoms of the thorny hawthorn and the blood-red hawthorn contain some organic acids and vitamins; these are taken for disorders in heart functions, vascular neuroses, hypertonic diseases, and others.