Heat Balance of the Earth

Heat Balance of the Earth

the relation between the gain and loss of radiant and thermal energy at the earth’s surface, in the atmosphere, and in the earth-atmosphere system. Solar radiation is the principal source of energy for the overwhelming majority of the physical, chemical, and biological processes in the atmosphere, hydrosphere, and upper layers of the lithosphere. Consequently, the distribution and interrelation of the components of the heat balance characterize the transformation of solar radiation in these envelopes.

R, which is the difference between the absorbed short-wavelength solar radiation and the effective long-wavelength radiation from the earth’s surface. The radiation balance may be a positive or negative quantity and is compensated by several heat fluxes. Since the temperature of the earth’s surface does not usually equal the temperature of the air, a heat flux P arises between the underlying surface and the atmosphere. An analogous flux F0 is observed between the earth’s surface and the deeper layers of the lithosphere or hydrosphere. It should be noted that the heat flux in the soil is determined by molecular thermal conduction, whereas heat transfer in bodies of water is generally, to a greater or lesser degree, of a turbulent nature. The heat flux F0 between the surface of a body of water and the deeper layers of the water body is equal to the sum of the change in the water body’s heat content, or enthalpy, over a given period of time and the heat transfer by currents within the body of water. The quantity LE represents the heat lost owing to evaporation and is defined as the product of the mass of the evaporated water E and the latent heat of vaporization L. LE is usually of considerable importance in the heat balance of the earth’s surface. The value of LE depends on the moisture content of the earth’s surface, the temperature of the surface, the humidity of the air, and the intensity of turbulent heat exchange in the surface air layer. This intensity determines the rate of transfer of water vapor from the earth’s surface to the atmosphere.

The atmospheric heat-balance equation has the form

and the gain or loss of heat Fa owing to heat transfer through the vertical walls of the column. The heat transfer reflected in Fa is associated with ordered motions of the atmosphere and with large-scale turbulence. In addition, the equation for the atmospheric heat balance includes the term ΔW, which is the change in the heat content within the column.

Table 1 gives the average latitudinal values of the components of the heat balance of the earth’s surface for the oceans, for the land, and for the oceans and land taken together. Table 2 gives the average values for the components of the atmospheric heat balance. In these tables, positive values of the heat-balance terms correspond to a heat gain. The tables pertain to average annual conditions and thus do not include the terms characterizing the changes in the heat content of the atmosphere and the upper layers of the lithosphere, since the average annual values of these terms are nearly zero. 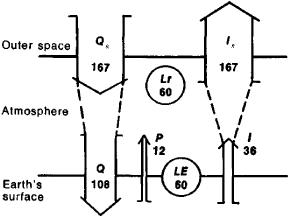 Figure 1. Schematic diagram of the heat balance of the system consisting of the earth’s surface and atmosphere

Data on heat-balance components are used in dealing with many problems in climatology, land hydrology, and oceanography. Such data are used both to provide substantiation for numerical models in climate theory and to carry out empirical verification of the results of the application of the models. Heat-balance data play an important role in the study of climate changes. Calculations of evaporation from the surfaces of river basins, lakes, seas, and oceans make use of heat-balance data. Other areas where heat-balance data are used include the investigation of energy transport in ocean currents, the study of snow and ice cover, the study of transpiration and photosynthesis in plant physiology, and the investigation of heat production and transfer in living organisms in animal physiology. The Soviet geographer A. A. Grigor’ev made use of heat-balance data in his study of geographic zonation.