(lo͞o`sĭfər) [Lat.,=light-bearing], in Christian tradition a name for SatanSatan
[Heb.,=adversary], traditional opponent of God and humanity in Judaism and Christianity. In Scripture and literature the role of the opponent is given many names, such as Apolyon, Beelzebub, Semihazah, Azazel, Belial, and Sammael.
..... Click the link for more information. . In the Vulgate, Lucifer served as a translation of the Hebrew epithet meaning "Day Star," a name associated with the presumptuous King of Babylon in the Book of Isaiah. Some early Christian writers found a parallel in the Gospel of St. Luke, where Jesus refers to Satan falling like lightning from heaven. On this basis they identified Isaiah's "Day Star" with Satan and concluded that there was scriptural authority for designating him "light-bearer." In antiquity Lucifer was also the name given Venus as the morning star.
The Columbia Electronic Encyclopedia™ Copyright © 2013, Columbia University Press. Licensed from Columbia University Press. All rights reserved. www.cc.columbia.edu/cu/cup/

(pop culture)
Although the Lucifer who has battled the X-Men is not the devil, he is appropriately named. When writer Stan Lee and artist Jack Kirby introduced this mysterious masked figure in X-Men vol. 1 #9 (1965), they revealed that it was Lucifer who had crippled the team's founder, Professor Charles Xavier, years before, but established virtually nothing else about the character. Lee's successor as X-Men writer, Roy Thomas, explained the mystery in his first two issues (XMen #20–#21, 1966). Lucifer was the advance agent for a race of alien invaders that has been called the Arcane or the Quists, from the planet Quistalium. He looked human, although his mask concealed most of his head. Years ago Lucifer took control of a Tibetan city as his base. The young Xavier aided rebels who forced Lucifer to abandon the city. In revenge, Lucifer dropped a huge slab on Xavier, crushing his legs. Thomas showed how the X-Men stymied Lucifer's attempt to use the Quist computer Dominus to sap the wills of Earth's population, rendering them defenseless. Furious that the invasion had been thwarted, Quistalium's ruler exiled Lucifer to a “Nameless Dimension” (comparable to the Phantom Zone in Superman) in which he somehow acquired the mental ability to manipulate “ionic energy” (Iron Man #20, 1969). From this dimension Lucifer could create a psychic link with human hosts on Earth, endowing them with superhuman abilities. Lucifer intended to use these host bodies to resume his attempt to conquer Earth, but his first host fought off Lucifer's mental domination and his next two hosts perished. In 1987, the sentient Dominus battled the West Coast Avengers and asserted that Lucifer had been “terminated.” Whether Lucifer is indeed dead remains as much an enigma as his true name and his unmasked face.
The Supervillain Book: The Evil Side of Comics and Hollywood © 2006 Visible Ink Press®. All rights reserved. 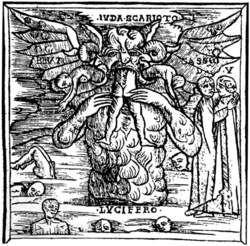 1. the leader of the rebellion of the angels: usually identified with Satan
2. the planet Venus when it rises as the morning star
Collins Discovery Encyclopedia, 1st edition © HarperCollins Publishers 2005