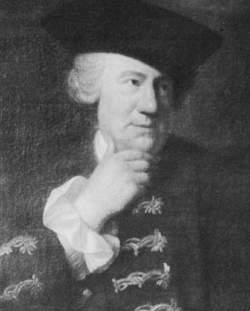 People have been spreading juicy rumors about the sensual indulgences and satanic perversities of the Hellfire Club since 1748.

The infamous Hellfire Club was founded by Sir Francis Dashwood (1708–1781), but neither he nor any of its members ever called their gatherings by that name. Sir Francis named his merry group of revelers the Friars of St. Francis of Wycombe, the Monks of Medmenham, or the Order of Knights of West Wycombe—none of which has quite the ring of the Hellfire Club, the name bequeathed to the group by outsiders.

Dashwood, son of a wealthy businessman, got his title by marrying into the aristocracy. Quite civically minded, for over twenty years Sir Francis sat in the House of Commons as an MP and held the offices of chancellor of the Exchequer, postmaster general, and treasurer to King George III. While this may seem like the résumé of a rigid and conservative gentleman, as a privileged young man Dashwood had gone on the Grand Tour of Europe, the rite of passage for sons of the idle rich. In Italy he came to admire the classical architecture and mythology of the country, but at the same time, he managed to develop a strong distaste for Roman Catholicism. Although, as one who would soon become one of the landed gentry, he seemed an unlikely prospect for recruitment into the Jacobite revolutionary movement, he did become a member, then in short order joined the Rosicrucians.

While staying in Florence, Dashwood met Prince Charles, pretender to the Scottish throne, who had far-reaching associations with Masonic and neo-Templar secret societies. Quite probably under Prince Charles’s sponsorship, Dashwood was initiated into a Masonic lodge.

In London, about 1738, Dashwood founded the Society of the Dilettanti, essentially a private club for the hard-drinking and womanizing of the aristocracy. In 1746 he established the Order of the Knights of St. Francis, whose members initially met at the George and Vulture public house in Cornhill, in a room dominated by a large crystal globe encircled by an Ouroboros, a gold serpent with its tail in its mouth.

In 1751 Dashwood leased as the headquarters for his order Medmenham Abbey, originally a twelfth-century Cistercian monastery, on the Thames near Marlow, about six miles from his ancestral home at West Wycombe. He had stained-glass windows bearing the motto “Do as thou will” placed above the front door. His lifelong fascination with pagan gods and goddesses was architecturally expressed by designing the west wing of the mansion as a replica of a classical temple to Bacchus. To celebrate the temple’s completion, Dashwood composed a pageant and employed actors to play fauns, satyrs, nymphs, and various gods and goddesses. As the Hellfire Friars dined, they were watched over by statues of the Freemasons’ guardians of secrecy, Harpocrates, the Egyptian god of silence, with his finger to his lips, and Angerona, the Roman goddess of silence, indicating to the Friars that nothing that was said or went on in the Abbey was to be mentioned outside its walls.

Dashwood was delighted to discover a prehistoric network of caves under West Wycombe Hill, and he had them enlarged to serve as additional dens of iniquity. In ancient times a pagan altar had existed on the hill, and catacombs under the ground contained the pagan dead. Along with his instructions to excavate and enlarge the old caves, Dashwood ordered the construction of individual “cells” in the passageways for the Friars to dally with their female guests. An underground stream, dubbed “the River Styx,” had to be crossed to enter the Inner Sanctum, where Black Masses were held. As a young man in France, Dashwood had attended a Black Mass, indulging his curiosity about the subject. There is no real evidence that Dashwood ever actually practiced Satanism, but he loved conducting pseu-dosatanic rites to mock the Catholic Church.

Local gossip, which became legends passed down for generations, had the Hellfire Friars ferrying prostitutes down the Thames from London in barges to perform in the Black Mass as nuns. The Black Masses, according to the old stories, were conducted over the naked bodies of aristocratic ladies, as well as prostitutes.

A number of scholars who have researched the Hellfire Club have concluded that the accounts of satanic Black Masses have been exaggerated over the years. Although the club may have included mock satanic rites as a prelude to sexual indulgences, most of the Friars of the Order of St. Francis were hardy and happy disciples of Bacchus and Venus who gathered to celebrate the excesses of both sex and drink. At heart, Sir Francis Dashwood was a disciple of the ancient pagan mystery schools.

It has been said that the members of the Hellfire Club included some of the wealthiest and most influential people in England. Long-suspected members include the Earl of Sandwich; John Wilkes, MP of Aylesbury; the satirical artist William Hogarth; John Stuart, Earl of Bute, who in his later years was briefly the prime minister of England; the Marquis of Granby; the Prince of Wales; and very possibly Benjamin Franklin and Horace Walpole.

Feedback
Flashcards & Bookmarks ?
Please log in or register to use Flashcards and Bookmarks. You can also log in with
Flashcards ?
My bookmarks ?
+ Add current page to bookmarks
Mentioned in ?
References in periodicals archive ?
So while it does keep the basic premise of the classic by Chris Clairmont and John Byrne, don't expect to see the Hellfire Club make any appearances.
MOVIE REVIEW: Blast of Boomerang
Set in 1741, the tale follows investigator Daniel Parsons, as he tries to get to the bottom of a series of grisly murders taking place in an isolated village overlooked by the infamous Hellfire Club in Co.
Turn over a new leaf
This is something Jake Tapper seems to have figured out in his debut novel The Hellfire Club. The Hellfire Club is a reminder that the rarest thing of all in spy novels is a writer willing to give us a character who could exist just as easily in any kind of literary fiction.
Bookworm: Jake Tapper's Spy Novel Is Startlingly Good
We had the good fortune to have the backing of New Hellfire Club Glasgow that brought us back from the brink and we're now better in that regard than for years.
TOP OF THE SCOTS; Basketball Warriors defeat Lothian Phoenix to lift Wheelchair Scottish Cup
There was something even more opulent, almost louche, as the term scatter art was right to suggest, in her 1989 piece The Hellfire Club Episode of the Avengers.
Karen Kilimnik: 303 Gallery
Page 14 AUTHOR Alan Titterington discovered some dark deeds by his ancestor John Titterington, a president of Halifax's Hellfire Club in 1848.
Birthday girl Agnes is 102
Other acts on the bill include A Common Crown, Amber Alexis, Big House Pete, The Hellfire Club and Kill the Drama.
MTS Management Group's Xander Demos Lends Talents to PA Rock Show's 11th Anniversary Benefit Event
The Hellfire Club Songs for Fallen Stars A MAINSTAY of the country and western circuit in the 90s, the band - now a seven-piece - blend in rock for a heady mix that often modernises the country sound on this album.
Sound check; We're back. After taking a back seat while the Edinburgh Fringe was on, Scotland's best place for new music is ready to roll once again
The album highlights May's talent as a songwriter, with tracks ranging from the life-affirming joy of It's Good To Be Alive to the fun and atmospheric Hellfire Club and the swamp blues of Wicked Way.
preview
Francis Dashwood, the leader of the notorious rake's group called the Hellfire Club, would have likely been called to mind for Regency readers through Austen's use of Dashwood as the surname of heroines Marianne and Elinor.
Barchas, Janine. Matters of Fact in Jane Austen: History, Location, and Celebrity
DURING the late 18th century Skelton Castle was the scene of wild parties modelled on Sir Francis Dashwood's infamous Hellfire Club.
Crazy days and eccentric exploits at historic castle; REMEMBER WHEN www.gazettelive.co.uk/rememberwhen Compiled by Paul Delplanque
If a new X-Men movie was announced, chances are fans would want Dark Phoenix, the Sentinels, Shadow King, Mister Sinister, Apocalypse or the Hellfire Club. For Batman, it could be The Riddler, The Mad Hatter, Calendar Man, Hush, Harley Quinn or Killer Croc.
'Transformers 4: Rise Of Galvatron' Fake Trailer Emerges