[¦hē·mō·dī′nam·iks]
(physiology)
A branch of physiology concerned with circulatory movements of the blood and the forces involved in circulation.
McGraw-Hill Dictionary of Scientific & Technical Terms, 6E, Copyright © 2003 by The McGraw-Hill Companies, Inc.
The following article is from The Great Soviet Encyclopedia (1979). It might be outdated or ideologically biased.

the movement of blood through the blood vessels caused by the difference in hydrostatic pressure in various parts of the vascular system. The difference in pressures is maintained by the pumping function of the heart, which ejects into the human vascular system 60-70 milliliters of blood with each contraction; this is equivalent to 4.5-5 liters per minute (l/min) at rest. This quantity is the minute volume of the heart or cardiac output, the most important parameter of cardiovascular function. During muscular exertion it can increase to 20-25 l/min.

Blood is ejected into the closed vascular system, which resists the movement of blood because of the friction of blood against the vascular wall and of the viscosity of the blood itself. In a detailed mathematical model of the movement of blood, the latter is regarded as a suspension of formed elements, that is, a non-Newtonian fluid, whereas the blood vessels are considered ductile-elastic tubes whose properties (the geometric properties, including size and branches, and the physical properties, including ductility, flexibility, and permeability) change over their length. The friction of blood against the vascular wall tends to vary with the size of the vessel, that is, with its diameter and length. Vascular resistance to the movement of blood can be expressed by Poiseuille’s law.

Figure 1. Successive (a) and parallel (b) connections of blood vessels

The vascular system is a series of tubes of different lengths and diameters connected successively and in parallel (see Figure 1). With a successive connection, the total resistance is equal to the sum of the resistances of the individual vessels:

With a parallel connection, the total resistance is expressed by the equation

The terminal portions of the arteries, the arterioles, are the most resistant. The impedance to the outflow of blood from the arterial system creates so-called arterial pressure. Its level (P) is proportional to the vascular resistance (R) and amount of blood ejected by the heart into the vascular system per unit of time (Q), that is, P = Q x R, hence Q = P/R. This formula is used for the cardiovascular system as a whole if the pressure at the beginning of this system (that is, in the arteries) is equal to P, and at the end of the system (that is, in the orifice of the venae cavae) it is equal to zero. If it is not equal to zero, the equation acquires a somewhat different appearance:

(where P1 and P2 are the pressures at the beginning and end of the vascular system, respectively). By using this basic equation of hemodynamics one can determine the vascular, or so-called peripheral, resistance if the pressures P1 and P2 and the minute volume of the heart (Q) are known.

The amount of peripheral resistance is determined mainly by the tone of the arterioles, that is, by the degree of constant contraction of the smooth musculature of the walls of these vessels. The level of arterial pressure in the organism is regulated by change in arteriole tone. The latter alters the lumens of the arterioles and resistance of the vessels. The arteriole tone thus regulates the flow of blood through the separate vascular regions, adjusting it to the intensity of the metabolic processes in the tissues, that is, to their oxygen and nutritional requirements. (The blood flow may increase 100 times or more in vigorously functioning tissues, for example, in contracting muscle, without any significant change occurring in the general arterial pressure and minute volume of the heart.)

The amount of blood flowing through all parts of the vascular system per unit of time is constant. The linear velocity of the blood flow is inversely proportional to the total lumens in a given section of the vascular bed. The average linear velocity of the blood flow in the human aorta is 50 cm/sec; it is 0.5 mm/sec in the capillaries and 20 cm/sec in the venae cavae. The blood flow in the aorta and large arteries is pulsating; it increases during systole (contraction) and decreases almost to zero during diastole (relaxation) of the heart. 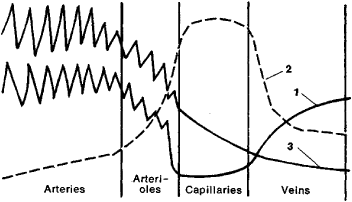 Figure 2. Change in rate of blood flow (1), in lumens of blood vessels (2), and in blood pressure (3) in different sections of the vascular bed

The relationship between the total lumens of the various parts of the vascular bed, level of blood pressure therein, and rate of blood flow is shown in Figure 2. Thanks to the flexibility of the arterial walls, the arterioles stretch during systole and hold additional blood, but they collapse during diastole, helping to force blood into the capillaries. This ensures a continuous flow of blood in the capillaries, which is important for the exchange of substances between the blood and the tissues.

Feedback
Flashcards & Bookmarks ?
Please log in or register to use Flashcards and Bookmarks. You can also log in with
Flashcards ?
My bookmarks ?
+ Add current page to bookmarks
Mentioned in ?
References in periodicals archive ?
Early colon cancer can be cured by radical surgery9, but perioperative patients have changes in hemorheology and hemodynamics because of factors such as stress.
Influence of propofol intravenous anesthesia on hemorheology, haemodynamics and immune function of colorectal carcinoma patients undergoing radical resection
Nonselective beta blockers (NSBB) have been associated with a reduced survival in patients with RA [6], probably due to an increased incidence of PICD, suggesting a potential unfavorable mechanism linked with the worsening of central hemodynamics [7].
Hemodynamic Evaluation of Nonselective [beta]-Blockers in Patients with Cirrhosis and Refractory Ascites
In summary, CRRT is not only a treatment for AKI and a substitute for organ function, but it is also an important technique in hemodynamic therapy that focuses on managing fluid overload and stabilizing hemodynamics in critically ill patients.
Clarifications on Continuous Renal Replacement Therapy and Hemodynamics
Little is known regarding the effects of hypoxic training integrated with HIIE on hemodynamics and microvascular function in athletes.
Acute effects of normoxic and hypoxic high-intensity interval exercise on hemodynamics and cutaneous blood flow in youth soccer players
The size of the lesion may correlate with right-sided hemodynamics and the severity of underlying tricuspid regurgitation.
Internal Jugular Venous Pseudoaneurysm in a Patient with Heart Failure and Severe Tricuspid Regurgitation
In this study, we developed an in vitro endothelial cell culture system, which mimics the geometry and hemodynamic conditions of an artery.
Endothelialized in vitro tubular silicone scaffolds
However, the reports of prior investigators of the potential for NIRS monitoring to contribute to the evaluation of testicular hemodynamics support our suggestion that SR-NIRS assessment of spermatic cord tissue oxygenation should be explored further.
Diagnosis of testicular torsion using near infrared spectroscopy: A novel diagnostic approach
Central hemodynamics was studied by means of echocardiography.
Effect of psammotherapy on cardiovascular system of patients with chronic obstructive pulmonary disease in stage of rehabilitation
Human clinical trials investigating the hemodynamics of Ginkgo usually involve the use of EGb 761, a standardised Ginkgo preparation created by the herbal firm Schwabe[TM].
Potential interactions of Ginkgo biloba: a critical review of current evidence
The results indicated that the administration of AMG0001 contributes to improving hemodynamics.
AnGes MG Announces Results of Phase II Clinical Trials of HGF Gene Medicine
Tibial bypass has been the only treatment to improve hemodynamics, as measured by the ankle-brachial index, but most patients forgo the surgery because of its considerable associated morbidity and mortality.
Stents for limb ischemia
The influences of normal sleep states as well as the effect of SDB on cerebral hemodynamics are discussed.
Stroke and sleep-disordered breathing