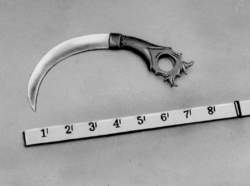 A boleen is a traditional Wiccan tool for cutting herbs. Courtesy Raymond Buckland.

Herbs are aromatic plants used in culinary arts, in medicine, and also in magic. A lot of herbal lore has been handed down orally, from generation to generation, and only in relatively recent times has it been written down. Hippocrates listed more than 400 "simples," or single herbs, while Dioscorides detailed 600. Some Roman emperors had botanists gather herbs from the outreaches of the far-flung empire and send them back to Rome. A similar system was established in the New World by Spanish explorers.

Herbal medicine derives from the human need for health and strength; they are seen as cures for numerous ills and aids that help wounds mend. Many of today's medicines come from primitive botanical compilations. Some have been discarded for stronger, supposedly more effective and "purer" synthetic drugs, while others are still used in many parts of the world in their natural form. In 1775 William Withering, a doctor from Birmingham, England, isolated digitalis, an important heart remedy found in the leaves of the foxglove. For centuries Witches prescribed a tea brewed from foxglove leaves for weak hearts. Dr. Cheney, of Stanford University, "discovered" and proved that raw cabbage juice helped heal stomach ulcers. Again, such knowledge had been known to Witches for centuries.

One popular misconception of Witches is that they boil up all sorts of unsavory ingredients in their cauldrons: a mouse's ear, a lizard's tail, a frog's foot, and a snake's head, for example. In fact these ingredients, and others, are simply colorful common names for herbs and plants. Before all plants were given their own individual Latin name as a definite identifier, they had local names which varied greatly in different parts of a country. Many of these names were given to the plant based on its shape or color, or on the shape or feel of its leaves. Mouse's ear was also known as mouse-blood wort; its official name was Hieracium pilosella. Lizard's tail was breastweed, or Saururus cernuus, while frog's foot was the bulbous buttercup, or Ranunculus bulbosus. Finally, snake's head was balmony, or Chelone glabra. There were dozens, if not hundreds, of these colorful names applied to plants, which led to the mistaken believe that all sorts of horrible ingredients were employed in potions and salves. The notion that the physical appearance of an herb indicates its use is known as the Doctrine of Signatures.

In addition to making simples, syrups, teas, salves and ointments, and poultices and powders, as well as decoctions, infusions, and macerations, Witches also use herbs in a magical fashion. For this, the herb must to be gathered in the right phase of the Moon, according to its astrological associations. It should be cut with a boleen, a magical knife used only for cutting herbs. The herb might be used to stuff a poppet—a cloth doll representing someone—in order to aid in recovery. Herbs could also be strewn around a house, or a person, as a protection from evil. They could even be placed in a bath to protect or empower the bather. Worn as part of a talisman, they could attract money, power, or blessings. Herbs also are frequently dried and burned as incense in magical rituals.

January 7
A Japanese ceremony dating back to the ninth century, also called Wakana-setsu or " Festival of Young Herbs," or Jin-jitsu " Man Day " because it occurs on the zodiacal day for "man." After an offering to the clan deity in the morning, participants partake of nanakusa gayu, a rice gruel seasoned with seven different herbs that is said to have been served for its medicinal value to the young prince of the Emperor Saga (ruled 810-824). The herbs are shepherd's-purse, chickweed, parsley, cottonweed, radish, as well as herbs known as hotoke-no-za and aona in Japanese.
SOURCES:
DictFolkMyth-1984, p. 540
FolkWrldHol-1999, p. 83
(c)
Holidays, Festivals, and Celebrations of the World Dictionary, Fourth Edition. © 2010 by Omnigraphics, Inc.