Also found in: Dictionary, Thesaurus, Medical.
Related to Hereditary Diseases: Genetic diseases
The following article is from The Great Soviet Encyclopedia (1979). It might be outdated or ideologically biased.

diseases caused by disturbances in the storage, transmission, and production of genetic information. With the development of human genetics, including medical genetics, the hereditary nature of many diseases and syndromes of undetermined etiology became known. The role of hereditary factors has been confirmed by the greater frequency of some diseases in certain families than in the population at large. The study of hereditary diseases in man is chiefly the concern of medical genetics.

Hereditary diseases are caused primarily by chromosomal and gene mutations; a distinction is made, accordingly, between chromosomal and strictly hereditary (gene) diseases. Mutation results in the disruption of the synthesis of a particular polypeptide (structural protein or enzyme). Limited or generalized disorder (change in the phenotype) arises in the patient depending on the specific function of this polypeptide for the vital functions of the organism.

The following principal types of inheritance are distinguished according to the location of the pathological (mutant) gene—in an autosomal or in a sex chromosome—and according to its relations with the normal allele, that is, whether the mutation is dominant (the normal gene is suppressed by a pathological gene) or recessive (the pathological gene is suppressed by a normal gene): autosomal-dominant, autosomal-recessive, and sex-linked (or limited to sex). The type of inheritance is determined by analysis of the genealogy, which takes into account the prevalence of the disease under study in a family and the relationship between the persons afflicted with a hereditary disease. Clinical genealogical research deals with the construction and analysis of genealogies.

In hereditary diseases of the autosomal-dominant type, the mutant gene is manifested even in the heterozygous state. Boys and girls suffering from hereditary disease are born with equal frequency. Pathological heredity can be traced vertically in the genealogy. At least one of the patient’s parents was also afflicted. A genealogy characteristic of the autosomal-dominant type of inheritance is shown in Figure 1. In hereditary diseases of the autosomal-recessive type, the mutant gene is manifested only in the homozygous state. Diseases of this type occur with equal frequency among boys and girls. The parents of the afflicted children are phenotypically healthy but act as heterozygous carriers of the mutant gene. Pathological heredity can be traced horizontally in the family genealogy. The probability of children being born with hereditary disease increases if the parents are blood relatives. A genealogy characteristic of the autosomal-recessive type of disease is shown in Figure 2.

If one of the parents is homozygous for a pathological recessive gene and the other is its heterozygous carrier, then children with hereditary disease may be born in half the cases. This creates the impression of a dominant type of hereditary disease (a genealogy is shown in Figure 3). This phenomenon is called pseudodominance. Pseudodominance differs from true dominance in that affected individuals homozygous for a recessive mutation when married to healthy persons will always have healthy offspring, but heterozygous, apparently healthy persons when married to other heterozygous carriers will have diseased children with a certain frequency (25 percent). If the genealogy shown in Figure 3 is traced back one more generation, it will look like that in Figure 4.

Hereditary diseases of the autosomal-recessive type include agammaglobulinemia, alkaptonuria, albinism, amaurotic familial idiocy, hepatolenticular degeneration, one of the forms of the pseudohypertrophic muscular distrophy, mucoviscidosis, and sickle-cell anemia.

Figure 4. The same genealogy as in Figure 3 traced back one more generation

Among the sex-linked diseases, of particular clinical significance are those caused by recessive mutations in the X chromosome (this type of inheritance is also called X-chromosomal disease). Women with this type of mutation are usually phenotypically healthy since the normal allele of the other X chromosome resists the pathological recessive gene. In men, however, the mutant gene is isolated and it determines the pathology of the phenotype. In X-chromosomal diseases, the effect of the mutant gene is manifested only in the heterogametic sex (that is, in males). In affected families, half the sons have the disease while half the daughters are carriers of the mutant gene (conductors), but the parents are clinically healthy. The disease is often seen in sons of the sisters of the patient (or propositus) or in his first male cousins on his mother’s side. The diseased father does not transmit the defective gene to his sons. A typical genealogy is shown in Figure 5. 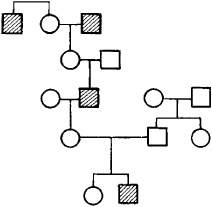 The aforementioned types of inheritance apply mainly to monogenic diseases (determined by the mutation of a single gene). However, a pathological condition may depend on two or more mutant genes. Some pathological genes have low penetrance. Their presence in the genome, even in a homozygous state, is essential but not sufficient for the development of the disease. Thus, not all the types of human hereditary diseases fit into the schemata listed above.

Inasmuch as any phenotype, normal or pathological, is determined not only by the genotype but is a result of the interaction of the genotype and its environment, considerable clinical polymorphism is inherent in hereditary pathology: different clinical syndromes may occur within a single nosologie entity and the severity of a disease may vary greatly. Wide variations in the clinical symptoms and course of a hereditary disease may occasionally be observed even in members of one family. In order to obtain an objective picture of the interaction of heredity and environment in the etiology and pathogenesis of hereditary diseases, it is important to conduct a clinical study of a hereditary disease as it occurs in identical and fraternal twins.

The nosologie classification of hereditary diseases is the result of comprehensive clinical (including clinical-genealogical) and laboratory examinations. Of great importance in diagnosis are biochemical, electrophysiological, cytomorphological, immunological, and other laboratory methods that frequently make it possible to identify not only the disease but the heterozygous carrier state of the mutant gene. The diagnosis is sometimes facilitated by the pleiotropic quality of genes, that is, the multiplicity of phenotypic effects for which a single gene is responsible. In particular, the effect of a pathological gene may be manifested not only in disease but also in a number of other traits that are usually harmless to the organism. The study of such traits is useful in determining the presence of the “guilty” gene in doubtful cases.

The progress of medical genetics and the growth of information about the nature of various hereditary diseases and about the influence of environmental factors on the manifestation of mutant genes have contributed greatly to the prevention and treatment of these diseases. Basic therapy for hereditary diseases includes the elimination or restriction of the intake of substances whose chemical transformation in the body, in the absence of an essential enzyme, results in a pathological condition; replacement therapy for a deficient enzyme or normal end product of a distorted reaction; and induction of deficient enzymes. Early treatment of hereditary disease is of considerable importance. Treatment must be started before the onset of pronounced disturbances in the patients. Some biochemical defects may be partly compensated with age. Great hopes rest on the future application of genetic engineering, that is, the planned intervention in the structure and function of the genetic apparatus, which entails the elimination or correction of mutant genes and their replacement with normal ones.

The prevention of hereditary diseases, mainly through genetic counseling, remains the most important task of medical genetics.

Feedback
Flashcards & Bookmarks ?
Please log in or register to use Flashcards and Bookmarks. You can also log in with
Flashcards ?
My bookmarks ?
+ Add current page to bookmarks
Mentioned in ?
References in periodicals archive ?
The post Rising frequency of hereditary diseases in Cyprus appeared first on Cyprus Mail .
Rising frequency of hereditary diseases in Cyprus
She said this was a "growing issue" due to Bahraini couples getting married despite knowing through pre-marital screening that their children could suffer from hereditary diseases common in the country.
New childbirth hope over blood diseases in Bahrain
"The program was founded as a preventive mechanism against chronic and hereditary diseases, which bear a heavy financial and emotional cost, " he said.
Premarital drug test 'useless'
Personal history of hereditary diseases was reported by 8% (n=49) of the participants and family history of hereditary disease was reported by 36% (n=210) of them.
Knowledge and attitude of university students towards premarital screening program
It involves swapping the nucleus from an affected mum-to-be's egg with that of a healthy donor egg from another woman, leaving behind the deformed DNA which causes the hereditary disease.
WOMB CURE FOR GENETIC DISEASES; 'Three parent' DNA swap ensures healthy kids
Three specialised labs at the centre u one for DNA analysis, another for cytogenetic tests and the third for analysing patients according to their metabolic features u are run by highly trained experts who conduct genetic tests by examining the sub-atomic levels of genes that cause hereditary diseases.
Thalassemia a Major Public Health Issue in UAE
Inherited large structural changes, known as copy number variations (CNVs), have been implicated in some hereditary diseases but have seldom been reported as the underlying basis for a familial cancer.
Gene Duplication Identified in an Uncommon Form of Bone Cancer
AN IVF technique that could wipe out hereditary diseases including cancer and diabetes has been developed by scientists.
New IVF bid to stop diseases
And the parliament added that EU governments should devote resources to counselling carrier patients of rare hereditary diseases about the risk of their children developing these health problems.
European Parliament attacks EU's woeful record on rare disease control
Local doctors stress that pre-marriage medical tests are vital for a healthy future When wedding bells loom it's an exciting time for couples; but because Arab communities are more prone to hereditary diseases and blood disorders because of the tradition of marrying close relatives, the run up to a marriage celebration is also the right time to conduct a medical screening test, advises the UAE Minster of Health, HE Humaid Mohamed Al Qutami.
Generation next
Screening tests cover hereditary diseases and blood disorders as well as diseases that need bacterial and viral screening tests and diseases like hepatitis, AIDS and other life-threatening diseases.
MoH pre-marriage screening campaign completes 9,389 tests in six months
6 Co Yemeni doctors warn that hereditary diseases caused by "getting married into relatives" represent a major danger to Yemeni society.
Hereditary diseases are threatening in-bred families, warn doctors (Local)