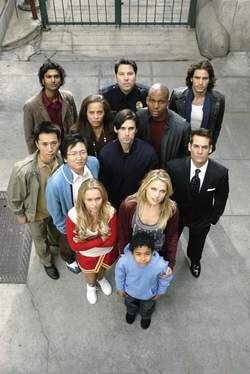 Heroes was a popular science fiction television series concerning an ensemble of superhuman protagonists that ran on NBC for four seasons, from September 2006 to February 2010. It was created and overseen by writer/producer Tim Kring. The series shows how various individuals across the world discover that they possess superpowers. Over the course of the series, these “Heroes” come together to cope with various threats to themselves and to the world.

The major story arc in Heroes was called “Volumes,” as if the arc was a series of graphic novels. In Vol. 1, “Genesis,” in the show’s first season, the individual “Heroes” discover their superhuman powers and band together to keep New York City from being destroyed by a massive explosion. This arc also introduced the Company, a covert organization that sought out superhumans. The second season, Vol. 2, “Generations,” features the Heroes preventing an alternate future in which most of humanity is wiped out by the “Shanti virus.” Two volumes made up Season 3: “Villains,” in which dangerous superhumans escape from the Company’s prison, and “Fugitives,” in which one of the Heroes, politician Nathan Petrelli, initiates a government program to capture all superhumans. The final season presented Vol. 5, “Redemption,” with a new villain, Samuel Sullivan, who runs a carnival of superhumans.

Among the most notable characters in Heroes’ enormous ensemble cast was Claire Bennet (played by Hayden Panettiere), a high school student and cheerleader who can quickly regenerate any injured tissue in her body. Hence she can recover from nearly any injury she suffers with superhuman rapidity, making her virtually unkillable. The first season’s catchphrase, “Save the cheerleader, save the world,” refers to Claire.

Another popular Hero was Hiro Nakamura (played by Masi Oka), a young Japanese man who has the power to teleport himself over great distances, to travel in time, and to manipulate time in order to slow it down, or even to reverse the effects of time on certain objects. A comic book fan, Hiro was the only one of the show’s Heroes who saw himself as a traditional superhero, and regarded it as his duty to use his superpowers to promote the cause of good.

Other Heroes include Peter Petrelli (played by Milo Ventimiglia), a nurse and paramedic with the superhuman ability to mimic the superpowers of others that he encounters, and his brother Nathan Petrelli (played by Adrian Pasdar), a politician who can fly. Niki Sanders (played by Ali Larter) is a stripper with a multiple personality, who can manifest superhuman strength in her alternate personality of Jessica. Niki was eventually killed off, but Larter also played Niki’s twin sister, Tracy Strauss, a political advisor, who can generate freezing temperatures. Gabriel Gray, alias Sylar (played by Zachary Quinto), was one of the series’ leading villains. He is a serial killer who murders superhumans to analyze their brains in order to duplicate their superpowers within himself.

The title characters of Heroes are not super-heroes according to a strict definition of the term. Although they have superhuman powers, they did not adopt heroic identities, with costumes and codenames. Moreover, they did not take on continuing missions such as crime fighting; indeed, they mostly sought to lead ordinary lives.

In its first season, Heroes was both a critical and popular success. There was also a weekly Heroes webcomic, which was collected into graphic novels published by DC Comics’ Wild-Storm line.

However, various critics contend that Heroes began to lose its direction in the second season. The producers did not find a way to rework the show that would reverse the decline in ratings, and Heroes ended with its fourth season in 2010. The Cape (NBC, 2010-2011), No Ordinary Family (ABC, 2010-2011), and Alphas (SyFi, 2011-)—TV shows borrowing similar themes— debuted in its aftermath. —PS & GM

The Superhero Book: The Ultimate Encyclopedia of Comic-Book Icons and Hollywood Heroes © 2012 Visible Ink Press®. All rights reserved.
The following article is from The Great Soviet Encyclopedia (1979). It might be outdated or ideologically biased.

in ancient Greek religion and mythology, legendary leaders or great warriors who were worshiped after their death for their semidivine attributes. Hero cults were maintained by communities or towns that considered such figures to have been their ancestors.

Many of the heroes worshiped in ancient Greece in the first millennium B.C. were originally ancient local deities who had lost their former significance with the spread of the Olympian religion (for example, Agamemnon and Helen). The Greeks also worshiped eponymic heroes—that is, persons for whom a tribe or city had been named (for example, Lacedaemon and Corinth). More often than not, these were imaginary personages. Outstanding individuals known to history might also be considered heroes after their deaths (for example, the tyrant-slayers Harmodius and Aristogiton in Athens and the poet Archilochus on the island of Paros). Analogous cults of semidivine heroes are known among many other peoples (for example, Gilgamesh in Mesopotamia, Tiki in Polynesia, and Siegfried among the Germans).

Feedback
Flashcards & Bookmarks ?
Please log in or register to use Flashcards and Bookmarks. You can also log in with
Flashcards ?
My bookmarks ?
+ Add current page to bookmarks
Mentioned in ?
References in periodicals archive ?
If we internalize Mabini's Decalogue, as well as the teachings of all Filipino heroes who have braved death or persecution for home, nation, justice and freedom, and act accordingly, I think we can all be modern day heroes-even absent any official proclamation.
No official national heroes
National Heroes Day was initially celebrated on November.
'PNP will never run out of heroes'
Duterte, meanwhile, asked Filipinos to set aside differences, to create a better society for the future generations of Filipino heroes.
Pinoys urged to embody courage via deeds of heroism
The implausibility of officially picking a list of national heroes lies in the fact that heroism is both time-bound and timeless.
Why do we celebrate National Heroes' Day?
After Lee's detention, the sponsor called for measures for stabilizing the team's management, so the Heroes submitted a plan in mid-April.
Nexen Tire angers baseball fans for not sponsoring Heroes
* 114 Heroes Served: The Cunningham Team, affiliate lending specialists - Warrenville, IL
Homes for Heroes Honors Affiliate Real Estate and Lending Specialists Who Gave Back More Than $1,762,000 to 1,405 Community Heroes
'The proposed legislation seeks to ascribe certain privileges to living heroes and ensures that heroes are henceforth designated at state ceremonies,' he said.
Bill to honour national heroes passes 2nd reading
Gazillion has also issued a (https://marvelheroes.com/news/news-articles/marvel-heroes-omega-shutting-down) statement , saying: "The 'Marvel Heroes' servers will stay on until Dec.
Gazillion's 'Marvel Heroes' Shutting Down Friday
"For some, heroes are both a creation of and a service to society at large." (6) Based on the literature, they discovered that, on one level, heroes share the characteristic of being individuals placed in a public role because of some feat they performed or quality they possess.
Pick wisely: a look at whom select baseball players choose as their heroes and why
Heroes of the Storm is otherwise a free-to-play game, with players able to access up to seven heroes each week for free.
AU New Releases: Heroes of the Storm Launches for PC
Recently, the company launched a new design called 31 Heroes ( http://americanherotshirt.com/31-heroes-patriotic-apparel.php ) to commemorate 31 American soldiers who died on 08/06/2011 in Afghanistan.
American Hero T Shirt Launches 31 Heroes Patriotic Apparel
THE Welsh Heroes and Villains discussions at this year's festival are based on the Western Mail's successful second Welsh History Month.
HEROES AND VILLAINS