[for Ejnar HertzsprungHertzsprung, Ejnar
, 1873–1967, Danish astronomer. Although trained as a chemical engineer, Hertzsprung made his career in astronomy, specializing in exacting photographic observations of stars. In 1905 he discovered high-luminosity, or giant, stars.
..... Click the link for more information.  and H. N. RussellRussell, Henry Norris,
1877–1957, American astronomer, b. Oyster Bay, N.Y., grad. Princeton, 1897. In 1902 he went to Cambridge, England, to study. He returned to Princeton in 1905, was professor of astronomy there (1911–27), research professor (1927–47), and
..... Click the link for more information. ], graph showing the luminosity of a star as a function of its surface temperature. The luminosity, or absolute magnitudemagnitude,
in astronomy, measure of the brightness of a star or other celestial object. The stars cataloged by Ptolemy (2d cent. A.D.), all visible with the unaided eye, were ranked on a brightness scale such that the brightest stars were of 1st magnitude and the dimmest stars
..... Click the link for more information. , increases upwards on the vertical axis; the temperature (or some temperature-dependent characteristic such as spectral classspectral class,
in astronomy, a classification of the stars by their spectrum and luminosity. In 1885, E. C. Pickering began the first extensive attempt to classify the stars spectroscopically.
..... Click the link for more information.  or color) decreases to the right on the horizontal axis. It is found that the majority of stars lie on a diagonal band that extends from hot stars of high luminosity in the upper left corner to cool stars of low luminosity in the lower right corner. This band is called the main sequence. Stars called white dwarfswhite dwarf,
in astronomy, a type of star that is abnormally faint for its white-hot temperature (see mass-luminosity relation). Typically, a white dwarf star has the mass of the sun and the radius of the earth but does not emit enough light or other radiation to be easily
..... Click the link for more information.  lie sparsely scattered in the lower left corner. The giant stars—stars of great luminosity and size (see red giantred giant,
star that is relatively cool but very luminous because of its great size. All normal stars are expected to pass eventually through a red-giant phase as a consequence of stellar evolution.
..... Click the link for more information. )—form a thick, approximately horizontal band that joins the main sequence near the middle of the diagonal band. Above the giant stars, there is another sparse horizontal band consisting of the supergiant stars. The stars in the lower right corner of the main sequence are frequently called red dwarfs, and the stars between the main sequence and the giant branch are called subgiants. The significance of the H-R diagram is that stars are concentrated in certain distinct regions instead of being distributed at random. This regularity is an indication that definite laws govern stellar structurestellar structure,
physical properties of a star and the processes taking place within it. Except for that of the sun, astronomers must draw their conclusions regarding stellar structure on the basis of light and other radiation from stars that are light-years away; this light
..... Click the link for more information.  and stellar evolutionstellar evolution,
life history of a star, beginning with its condensation out of the interstellar gas (see interstellar matter) and ending, sometimes catastrophically, when the star has exhausted its nuclear fuel or can no longer adjust itself to a stable configuration.
..... Click the link for more information. . In population I regions (see stellar populationsstellar populations,
two broadly contrasting distributions of star types that are characteristic of different parts of a galaxy. Population I stars are young, recently formed stars, whereas population II stars are old and highly evolved.
..... Click the link for more information. ) like the spiral arms of galaxies or open star clusters, the stars fall almost exclusively on the main sequence. In population II regions like the nuclei of galaxies and globular clusters, the stars are older and have evolved significantly. The most luminous stars have evolved furthest, and an H-R diagram of such a region will show the upper end of the main sequence depopulated and will show a well-developed giant branch. In such a diagram it appears that the main sequence has "burned down" from the top like a candle. Thus, the point at which the main sequence terminates and the giant branch begins is an indication of the age of a star cluster. A modified H-R diagram of the stars in a cluster of unknown distance can be used to determine the absolute magnitude, or luminosity, of the stars. Since the apparent magnitude of a star of given absolute magnitude depends only on the star's distance, the observed apparent magnitude of the stars can be used to calculate the distance to the cluster.
The Columbia Electronic Encyclopedia™ Copyright © 2013, Columbia University Press. Licensed from Columbia University Press. All rights reserved. www.cc.columbia.edu/cu/cup/ (rus -ĕl) (H-R diagram) A two-dimensional graph that demonstrates the correlation between spectral type (and hence temperature) and luminosity of stars, discovered independently by the Danish astronomer E. Hertzsprung in 1911 and the American astronomer H.N. Russell in 1913. Instead of a uniform distribution, any large sample of stars is found to form well-defined groups or bands on the graph of spectral type plotted against absolute visual magnitude: about 90% lie along a diagonal band known as the main sequence; the somewhat brighter giant stars form another sequence as do the very brightest and relatively rare supergiants; white dwarfs and other groupings can also be distinguished.

There are several forms of H-R diagram. In most observational applications the absolute visual magnitude, M V, is the vertical axis and the color index, B –V , the horizontal axis, color index being related to but more easily measured than spectral type. These are color-magnitude H-R diagrams. When studying a cluster, whose stars are all at the same distance, apparent rather than absolute magnitude is used. Other studies use bolometric magnitude against effective temperature – theoretical H-R diagrams – or luminosity against color index – color-luminosity H-R diagrams.

The H-R diagram is of great importance in studies of stellar evolution. Diagrams obtained on the basis of theoretical calculations can be tested against observationally determined diagrams. They can be drawn for the brightest stars (see illustration), for stars in a particular locality such as the solar neighborhood (mainly small cool main-sequence stars), for pulsating variables, for globular clusters, etc. The two broad stellar populations – populations I and II – can be demonstrated by the H-R diagrams of a young open cluster (no giants), a somewhat older open cluster (a few giants), and a much older globular cluster (many giants and supergiants).

The H-R diagram can also be used for distance determination by both main-sequence fitting for stellar clusters and by spectroscopic parallax for individual main-sequence stars, the star's spectral type fixing its position on the diagram and thus indicating its absolute magnitude and hence its distance modulus.

(also color-luminosity array), a diagram of the relationship between the spectral class (or surface temperature) and absolute magnitude (or logarithm of luminosity) of stars, which allows conclusions to be drawn about the nature and development of stars.

The Hertzsprung-Russell diagram (H-R diagram) is named after E. Hertzsprung, who first discovered the above relationship, and H. Russell, who studied it in detail. The H-R diagram is a distinctive diagram of the state of stars, as a result of which stars with similar physical characteristics form in it more or less isolated groups, characterizing the initial conditions and subsequent stages of stellar evolution. 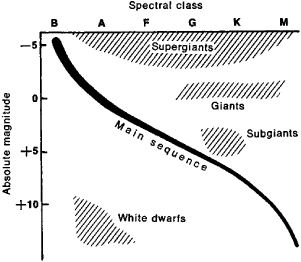 The majority of known stars are situated along the main sequence (see Figures l and 2), which extends in a diagonal in the H-R diagram from hot blue stars (for example, Spica; spectral class B) with a luminosity 1,000 times the sun’s through white stars (Sirius; A), yellowish-white (Procyon; F), yellow (the sun; G), and orange (τ Ceti; K) to the red dwarfs (the star Kruger 60; M), which are 1,000 times fainter than the sun. The giant stars—yellow, orange, and red ones of large dimensions (Capella, Arcturus, Aldebaran)—are located to the right of the main sequence. The supergiants—a relatively small group of stars of all spectral classes with very great luminosity (104-105 times greater than the sun’s)—fill the uppermost region of the H-R diagram (Rigel; B and Betelgeuse; M). Subgiants are the reddish stars whose dimensions are greater than those of stars in the main sequence with the same luminosity (components of eclipsing binary stars). Subdwarfs are dwarfs in the main sequence that are 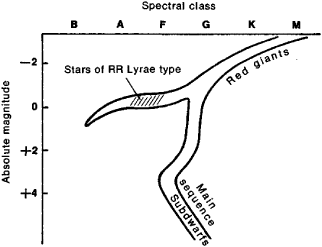 Each group of stars is characterized by certain relationships between mass, luminosity, and radius and by its own structural features. The number of stars in the H-R diagram varies from region to region; there are far fewer stars of great luminosity than faint stars. There are virtually no stars outside the groups described above. Figures 1 and 2 show H-R diagrams for stars in the vicinity of the sun and stars in open, loose clusters belonging to the flat component of our galaxy (Figure 1) and stars in globular clusters belonging to the spherical component of our galaxy (Figure 2). The difference in the diagrams (the absence of supergiants in the upper part of the main sequence among Population II stars) is attributable to the difference in age (that is, in the observable stages of evolution) and in the initial chemical composition of the two populations. (Population II stars are mostly older and contain fewer metals.)

[′hert·spru̇ŋ ′rəs·əl ′dī·ə‚gram]
(astronomy)
A plot showing the relation between the luminosity and surface temperature of stars; other related quantities frequently used in plotting this diagram are the absolute magnitude for luminosity, and spectral type or color index for the surface temperatures. Abbreviated H-R diagram. Also known as Russell diagram.
McGraw-Hill Dictionary of Scientific & Technical Terms, 6E, Copyright © 2003 by The McGraw-Hill Companies, Inc.