Also found in: Dictionary, Thesaurus.
Related to Heterocyclic Compounds: Heterocyclic chemistry
The following article is from The Great Soviet Encyclopedia (1979). It might be outdated or ideologically biased.

organic compounds containing a ring made up, in addition to carbon atoms, of atoms of other elements (heteroatoms), most often nitrogen, oxygen, and sulfur, and less frequently phosphorus, boron, and silicon. The diversity of types of heterocyclic compounds is very great, since they can differ in the number of ring atoms and by the nature, number, and positions of the heteroatoms, by the presence or absence of substituents or condensed rings, and by the saturated, unsaturated, or aromatic nature of the heterocyclic ring. The chemistry of nonaromatic heterocyclic compounds is very much like that of their open-chain analogues; there are some differences because of the effects of strain bonds in the ring and steric effects associated with the cyclic structure. Thus, ethylene oxide (I) and tetrahydrofuran resemble ethers, whereas ethylenimine (III) and pyrrolidine (IV) resemble acyclic secondary amines: 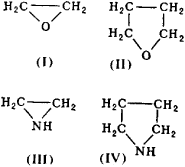 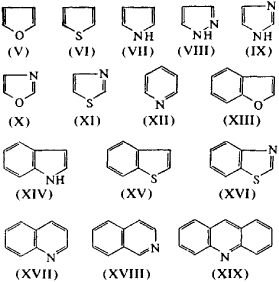 The aromatic nature of furan, thiophene, and pyrrole and of their benzo derivatives is due to the participation of the unshared electron pair of the heteroatom in formation of a closed system of six π-electrons. In an acid medium the heteroatom adds a proton, and the system ceases to be aromatic. Consequently such heterocyclic compounds as furan, pyrrole, and indole do not withstand the action of strong acids (thiophene is resistant to acids because of the smaller affinity of sulfur for a proton):

In six-membered heterocyclic rings the nonshared electron pair of the heteroatom does not participate in formation of an aromatic system of bonds. Therefore pyridine is a much stronger base than pyrrole, and it forms stable salts with acids:

Some important heterocyclic compounds—for example, pyridine and its homologues, quinoline, isoquinoline, indole, acridine, and carbazole—can be produced from coal tar, and furfurol is produced by hydrolysis of plant wastes (sunflower-seed hulls, straw, and so on). However, synthetic methods, which are very varied and specific, are the most important; they are treated in articles dealing with individual heterocyclic compounds. In synthesis, open-chain compounds are most frequently used as starting materials. Inter-conversions are known for some five-member heterocyclic ring systems. Thus, furan, pyrrole, and thiophene are inter-converted at 450° C over Al2O3 under the action of H2O, NH3, or H2S, respectively.

Feedback
Flashcards & Bookmarks ?
Please log in or register to use Flashcards and Bookmarks. You can also log in with
Flashcards ?
My bookmarks ?
+ Add current page to bookmarks
Mentioned in ?
References in periodicals archive ?
The last few decades have seen a flurry of activity in the solvent free synthesis and development of heterocyclic compound because of their important biological properties [1-2].
Synthetic and Biological Studies of Ethyl-7-methyl-3-(naphthalen2-yl)-5-phenyl-5H-thiazolo[3,2-a]pyrimidine-6-carboxylate Derivatives
Given the importance of this class of compounds in this study we investigate the catalytic effect of L-proline in synthesis of this class of heterocyclic compounds.
Synthesis of pyranopyrimidine derivatives using a practical one-pot three-component reaction in the presence of L-proline catalyst
The following review will examine the in vitro antimicrobial activity of pyrimidines, a class of heterocyclic compounds possessing a diverse range of pharmacological properties.
Significance and biological importance of pyrimidine in the microbial world
Lipid-derived compounds in meat volatiles have greater odour threshold values (Table 3) as opposed to sulfur- and nitrogen-containing heterocyclic compounds which make them less aroma significant.
Flavour Chemistry of chicken meat: a review
Heterocyclic compounds carrying nitrogen atoms occupy an important position in the effective therapy of a number of diseases and disorders.
Microwave mediated organic reaction: a convenient approach for rapid and efficient synthesis of biologically active substituted 1,3-dihydro-2H-indol-2-one derivatives
The diesel generators also produce "heterocyclic compounds which are more dangerous, especially to children and elderly people," according to Ba Qahaizel.
Diesel generator emissions harm health and environment
Heterocyclic Compounds (FCHC) devoted a special issue for honoring the
Two chemistry world bodies honor Kuwaiti female scientists in ''11
These nanoparticles have been found useful in the synthesis of heterocyclic compounds and their derivatives.
Green approach for the synthesis of Ag-nanoparticles and their catalytic properties in the presence of [K.sub.2]C[O.sub.3]
Fluorinated heterocyclic compounds; synthesis, chemistry, and applications.
Fluorinated heterocyclic compounds; synthesis, chemistry, and applications
In any given metabolome, most of the cofactors are heterocyclic compounds, and in particular in the autotrophic metabolome under discussion, all of them are heterocyclic nitrogenous compounds.
The canonical network of autotrophic intermediary metabolism: minimal metabolome of a reductive chemoautotroph
These heterocyclic compounds play an important role in flavor and are responsible for producing the sweet/caramel/earthy-like aromas commonly found in coffee.
A brief tour of coffee's chemical composition: everyday millions of people around the world begin their day religiously with a cup of coffee. Though today we easily identify coffee in its beverage form, it wasn't always this way in the beginning