An elementary scalar particle in the Glashow-Weinberg-Salam theory of electromagnetic and weak interactions. At present, there is no direct experimental evidence for its existence. It is closely associated with the origin of mass for all known elementary particles, as described in the Glashow-Weinberg-Salam theory. This gives the Higgs boson distinctive properties which shape the search for it. See Electroweak interaction, Standard model

The mass of the Higgs boson is uncertain theoretically, being determined by the parameters of the scalar self-interactions. It is strongly suspected, however, that the Higgs mass is between about 114 and 200 GeV/c2 (where c is the speed of light).

The fact that the Higgs particle is closely related to the origin of mass endows it with special properties crucial in its production and detection. The illustration shows how the decay pattern of a standard-model Higgs boson depends on its mass. 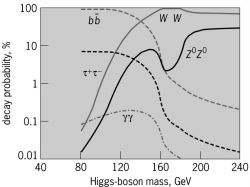 The first extensive searches for the Higgs boson were carried out at the Large Electron Positron Storage Ring (LEP) and Stanford Linear Collider (SLC), e+e- machines with sufficient center-of-mass energy to operate at the Z resonance. The LEP was subsequently upgraded, and there were signs that experiments at center-of-mass energies up to 208 GeV/c2 might be seeing the Higgs boson, but these were not sufficient to delay the machine's shutdown in November 2000 to make way for the construction of the Large Hardon Collider (LHC) in the same tunnel.

The Higgs Is a Type of Boson
Named after Satyendra Nath Bose, a boson is a particle that shares quantum states and behaves collectively; for example, a photon is a boson. The Higgs is a type of boson that was postulated by three scientists in the 1960s: Peter Higgs, Francois Englert and Tom Kibble, all of whom were present in Geneva in 2012 when the discovery was officially announced. See quantum state and particle accelerator.

Feedback
Flashcards & Bookmarks ?
Please log in or register to use Flashcards and Bookmarks. You can also log in with
Flashcards ?
My bookmarks ?
+ Add current page to bookmarks
Mentioned in ?
References in periodicals archive ?
Richard Griffiths, partner at Higgs & Sons and one of the organisers, said: "Despite a rather rainy start, the annual Higgs & Sons charity football tournament was a huge success.
Higgs' football tournament tops fundraising goal
A team of researchers at the (https://www.livescience.com/27888-newfound-particle-is-higgs.html) Large Hadron Collider (LHC), the massive particle collider in Geneva on the border between France and Switzerland, is trying to determine if a heavier (https://www.livescience.com/27888-newfound-particle-is-higgs.html) Higgs Boson really exists.
Space And Times Rests on the Mysterious Higgs Boson, Scientists Look For The 'One Big' Particle
Prior to joining Higgs & Sons, she worked at MFG Solicitors for four years and Eversheds for a decade.
Property expert joins law team
To celebrate the new partnership between Higgs Wealth and Camper & Nicholsons, the two companies joined-hands in hosting a private cocktail party in Higgs Wealth's office.
New partnership between Higgs Wealth and Camper & Nicholsons
31, 1945, in Beaver Dam, Ky., to Herbert and Elizabeth (Greer) Higgs. Lloyd married Carl Jean Tucker Aug.
Lloyd Higgs of Murphysboro
One of the motivations for the two Higgs doublet model is supersymmetry where each particle has a superpartner.
Analysis of Top Quark Pair Production Signal from Neutral 2HDM Higgs Bosons at LHC
He has won a prestigious PS75,000 Royal Society Wolfson Research Merit Award to run a project involving the mathematical modelling of a physical theory proposed to explain the existence of the Higgs boson, said to give matter its substance, or mass.
PS75k to solve a mystery of the universe in five years
It will take place at Newcastle's Centre for Life when Prof Higgs, who was born in Elswick, will share stories about his extraordinary career including the groundbreaking discovery of the Higgs particle.
Nobel prize winner is coming home
Prof Higgs predicted the existence of this elusive fundamental particle while working at Edinburgh University in 1964.
Nobel Prize winner honoured at event on his NATIVETYNESIDE
It's a Higgs boson bonanza for particle physicists, who are capitalizing on the newest data from the Large Hadron Collider to delve more deeply into the particle's properties.
New data give clearer picture of Higgs: LHC results allow physicists to scrutinize boson's properties
Mustang: The Story--from Zero to $1 Billion, authored by Mustang Engineering co-founder Bill Higgs, has been published and is available for purchase.
Mustang Engineering co-founder publishes book on company history
AS a Coventry City fan I have always suspected that the club's continual demise has been caused by SISU's knack of falling out with various people during critical negotiations for use of the Ricoh and the Alan Higgs Centre.
Please grab olive branch; Letters letters@coventrytelegraph.net