Refers to the culmination of the Italian Renaissance style in the late 16th century, characterized by the imitative use of the orders and Classical compositional arrangements.

the period in Italian art history at the end of the 15th and during the first quarter of the 16th century; it heralded the highest, classical phase in the development of Renaissance art.

The main centers of the High Renaissance were Florence, Rome, and Venice (where the High Renaissance includes the 1530’s). The leading artists were Bramante, Leonardo da Vinci, Raphael, Michelangelo, Giorgione, and Titian. In High Renaissance architecture, sculpture, and painting the realism, humanism, and heroic ideals of the Renaissance, as well as their vitality and vividness, were crystallized and expressed with titanic force. Developing unusually quickly and in many directions, the art as a whole had a majestic, monumental character, a harmonic perfection, and a lofty idealistic structure. The principles of the period were reflected in a complex and varied manner throughout 16th-century Italian art and had a strong influence on all subsequent art. The characteristics of High Renaissance style were seen in the work of a number of German artists of the early 16th century (A. Dürer, H. Holbein). 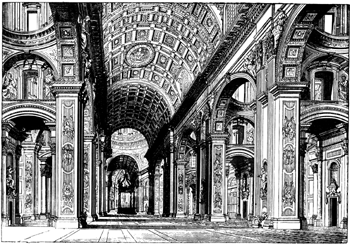 High Renaissance: interior of St. Peter’s, Rome
A term referring primarily to the culmination of the Italian Renaissance style in the 16th century (cinquecento). Saint Peter’s in Rome is the most famous example.
McGraw-Hill Dictionary of Architecture and Construction. Copyright © 2003 by McGraw-Hill Companies, Inc.

Feedback
Flashcards & Bookmarks ?
Please log in or register to use Flashcards and Bookmarks. You can also log in with
Flashcards ?
My bookmarks ?
+ Add current page to bookmarks
Mentioned in ?
References in periodicals archive ?
Raphael's Poetics: Art and Poetry in High Renaissance Rome is an impressive undertaking that delights, challenges and educates.
Raphael's Poetics: Art and Poetry in High Renaissance Rome
Presumably the council condones the felling, just as in the 1960s it condoned the destruction of the monastery ruins in Greyfriars Road when a 12-metre high renaissance facade was pulled down.
Let's talk about tree destruction; VIEWPOINTS
The last fifty years have seen especially in Italy a surge of scholarship on the period between the High Renaissance and the Enlightenment.
Marco Arnaudo, Il trionfo di Vertunno. Illusioni ottiche e cultura letteraria nell'eta della Controriforma
Antenhofer's important and well-wrought study rewards the reader equipped with the necessary languages with a richer understanding of the dynamics of inter-court relations in the High Renaissance, and of the workings of a Renaissance princely marriage.
Briefe zwischen Sud und Nord: Die Hochzeit und Ehe von Paula de Gonzaga und Leonhard von Gorz im Spiegel der furstlichen Kommitnikation (1473-1500)
After his zappy modern-dress beginning, McAnuff pulls off a master stroke when the Capulets' ball is held in full High Renaissance dress (Paul Tazewell did the wildly flamboyant costumes).
Romeo and Juliet
RAPHAEL (1483-1520) was one of the most important artists of the High Renaissance and most influential painters in European history, while the Medici family ruled Florence from the 14th to the 17th Century.
Your Money: FOCUS ON; A RECORD FOR RAPHAEL TV's JAMES BREESE answers your questions on antiques & collectables
His aides stressed that his chin should be concealed, so I put him in a contraposta pose." Contraposta is a High Renaissance pose in which the model twists his body in a certain way to give it the right symmetry.
Alexander Presniakov: "To really see is to think something deeply."
For scholars, it marked the transition from the vibrancy of the High Renaissance to a period dominated by the Counter-Reformation.
The Pontificate of Clement VII: History, Politics, Culture
Kevin Ancell's painted ramp paean to the high renaissance was directly commissioned by RVCA founders Conan Hayes and Pat Tenore.
Bull dog
As sixteenth-century Europe experienced an explosion of new ideas during the Reformation and High Renaissance, Florentine artists like Leonardo, Raphael, and Michelangelo flourished and influenced a multitude of others, not only in Italy, but throughout Europe.
European Art of the Sixteenth Century
Chronologically, historians place Arcimboldo in the Mannerist period, falling between the end of the High Renaissance and the beginning of the Baroque, yet his allegorical paintings really aren't Mannerist at all.
Clip & save art notes
Raphael's figurative language at this moment is characterized by an unsurpassed monumentality and yet tempered by a restraint and equilibrium that has, ever since, come to define terms such as "classical" and "High Renaissance."
"Raphael at the Metropolitan: The 'Colonna Altarpiece'" The Metropolitan Museum of Art, New York