(in Russian, mekhanizatsiia kryla) a set of devices that alter the lift and drag of an aircraft wing. They reduce the landing speed of an airplane, and during takeoff they facilitate its lift-off from the ground. The lift may be increased by a factor of 1.5–2.0 or more, leading to a reduction of 20–50 percent and more in landing speed, depending on the type of device. Additional lift is produced by increasing the curvature of the wing section ([1] and [2] in Figure 1) and the surface area of the wing (2) or by improving the airflow around the wing by means of boundary-layer control (3) and the use of jet devices (4). Combinations of these methods, such as extensible slats and flaps (2,c), are often used.

The boundary layer is controlled in two ways: by blowing it off with compressed air from the engine that is brought through 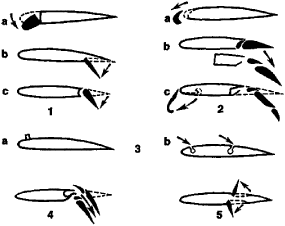 pipes with holes that are laid out along the wing or by drawing it off with a similar system. The flow of air around a wing is also substantially improved by a jet flap (4), which creates extra lift by feeding compressed air into a slot between its upper and lower surfaces. If the engine power is great enough, such a flap can provide a lift equal to the weight of the airplane (it can cause the airplane to hover in the air), and if the lift is greater than the weight, it can produce a vertical takeoff.

An airplane can be decelerated in the air by spoilers (5) or by drooped ailerons (1,c), which are deflected downward simultaneously and act as flaps.

In addition to the movable surfaces, whose position may be set manually or automatically, the Russian term mekhanizatsiia kryla also includes hydraulic and electric drives, control circuits (rods, bell cranks, and so on), and pipelines.

Feedback
Flashcards & Bookmarks ?
Please log in or register to use Flashcards and Bookmarks. You can also log in with
Flashcards ?
My bookmarks ?
+ Add current page to bookmarks
Mentioned in ?
References in periodicals archive ?
Among others, she served as chief engineer on the wing high-lift devices for the A380 in Bremen, as well as head of airframe design and technical authority for all Airbus aircraft, based out of Hamburg.
APPOINTMENTS
Mimicking nature, A350 XWB wings are fitted with unique high-lift devices adapting the wing shape during the flight for maximum aerodynamic efficiency.
Mubadala firm wins plane parts deals
By incorporating a more-or-less conventional tail, Piaggio's engineers were able to build high-lift devices into the main and forward wings.
On your tail: the tail is there to balance forces created by the wing's lift and to minimize yaw. How your tail is designed influences how it works and the airplane's stability
Use of high-lift devices and simulation of their effect is also possible by point mass simulation.
Development and simulations of aircraft guidance system using a 3-degree-of-freedom point mass model/ Skrydzio valdymo sistemos kurimas ir modeliavimas naudojant materialaus tasko modeli su trimis laisves laipsniais
British Airways Boeing 747-400 carrying 283 people on 11 May almost stalled just after take-off from Johannesburg following a spurious systems warning that automatically disabled some wing leading-edge high-lift devices. South Africa's Civil Aviation Authority is carrying out a serious incident investigation of the event.
Aircraft News - Africa / Middle East
Current studies indicate that FAR 36 Stage III noise requirements can be met with projected mixer-ejector exhaust-nozzle suppression technology and projected improvements to the aircraft takeoff lift/drag using high-lift devices. Many nozzle concept tests have been conducted in both industry and government facilities.
Installing a propulsion system in the HSCT