(redirected from Higher kinematic pair)
The following article is from The Great Soviet Encyclopedia (1979). It might be outdated or ideologically biased.

a movable coupling of two rigid members that imposes restraints on the relative motion of the members by the conditions of linkage. Each of the conditions of linkage removes one degree of freedom—that is, the possibility of one of the six independent relative motions in space. Three translational motions (in the direction of the three coordinate axes) and three rotational motions (around the axes) are possible in the rectangular system of coordinates. 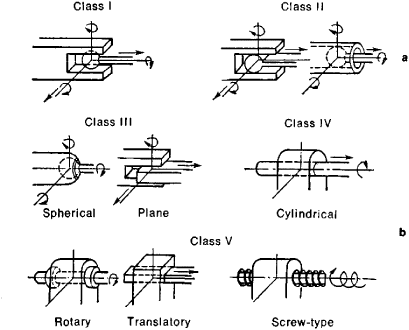 A distinction is also made between geometrically closed and open kinematic pairs. In geometrically closed pairs, constant contact of the surfaces is assured by the shape of components (for example, in all kinematic pairs shown in Figure 1); in open pairs, a compressive force is required for closure (for example, in a cam mechanism). Some movable couplings that have several intermediate rolling bodies (such as ball bearings and roller bearings) are also conventionally considered to be kinematic pairs; this is also true of junctions with deformable intermediate components (for example, play-free hinges of devices using flat springs; Figure 2).