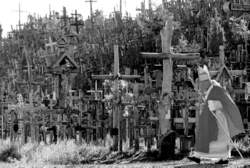 A tradition in Lithuania of erecting crosses for various personal and even political reasons has resulted in this unique display of Christian faith known as the Hill of Crosses, visited in this photo by Pope John Paul II. AFP/Qetty Images.

One of the most unique shrines in all of Christendom, the Hill of Crosses (Kryziu Kalnas) is a small hill upon which tens of thousands of Lithuanians have placed crosses, some as memorials to the dead, others as acts of political defiance, still others as celebrations of personal and national independence. Today the hill is a dense forest of crosses of all shapes and sizes.

The Hill of Crosses is located some ten miles north of Siauliai, Lithuania, almost to the Latvian border. It appears that the hill was originally a Pagan holy site, and that the tradition of placing crosses on the hill dates to the fourteenth century when Teutonic Knights controlled the region.

The modern development of the site as a place for individuals to make symbolic statements can be dated to the nineteenth century. In 1795 Russia took control of the area, which was not returned to Lithuania until 1918. In 1831–1832, the peasants attempted an unsuccessful revolt, and the first cluster of crosses was placed on the hill in their memory. By the end of the century there were some 150 large crosses, which grew to around 400 large crosses joined by thousands of smaller ones as World War II began.

After World War II, when the area was reincorporated into the Soviet Union, the hill became a symbol of Lithuanian nationalism. The small act of adding a cross to the hill became a way of opposing what was seen as Soviet occupation. Three times, the Soviet authorities leveled the hill (1961, 1973,and 1975) and destroyed the crosses. They converted the site into a waste and sewage dump. Pilgrims returned and rebuilt the site. Lithuania gained its independence with the fall of the Soviet Union, and in September 1993 Pope John Paul II visited the site to pay homage to the people who had maintained the hill over the years.

Historians have traced the phenomenon of the hill to a tradition of making wooden crosses that is an integral part of village piety and culture in Lithuania. The craft seems to have developed after the Christianization of the country in the fifteenth century, and today there are some 200 cross-crafting masters residing in Lithuania. Crosses are typically decorated with floral and geometric designs and statues of Christ or saints.

The typical Lithuanian crosses that originally decorated the hill have been joined by a spectrum of crosses from around the world, brought by pilgrims from many countries who have made the journey to Siauliai in recent decades.

Feedback
Flashcards & Bookmarks ?
Please log in or register to use Flashcards and Bookmarks. You can also log in with
Flashcards ?
My bookmarks ?
+ Add current page to bookmarks
Mentioned in ?
References in periodicals archive ?
They make a pilgrimage to the Hill of Crosses, a site historically under constant threat from the KGB.
TV CHOICE
But perhaps the most dramatic location in this series - shot in high definition format - is Lithuania's Hill of Crosses, which bristles like a forest.
Presenter Tweli Griffiths at Lithuania's Hill of Crosses in his new S4C series about Christianity.
CROSS PURPOSE; TWELI GRIFFITHS EXPLORES VARIATIONS IN THE CHRISTIAN FAITH tvcymru
A small round hill with an even smaller one beside it, set between two villages, Jurgeioiai and Domantai, so small they do not appear on a road map, and a small red four-pointed star all by itself signal the whereabouts of the Hill of Crosses, a focal point of peaceful resistance since the Middle Ages for Lithuania's Carholics, who form a large majority of the population of three million.
It is the Hill of Crosses, a place so sacred even a gigantic forklift, setting up yet another cross seemed to go about its business in a hushed reverent manner.
It was this iron will of the people, the singlemindedness that prompted ordinary folk to risk their lives in defiance to proclaim their faith, that gave the hill of Crosses the spirituality it has accumulated since the Middle Ages.
A freedom march from north to south of the Baltics, the Freedom Trail as it is called, established independence once again, and with joy, Lithuanians converged on the Hill of Crosses in vindication of their faith.
Lithuania's Holy Hill
Each day, hundreds of pilgrims visit the Hill of Crosses. There are pilgrims from the West, like me, moved by the courageous faith of the people of Lithuania.
The Hill of Crosses suggests the victory of Easter
* The pope celebrated Mass along the Hill of Crosses, a centuries-old pilgrimage site where Catholics for years engaged in a seesaw battle of symbols with communist authorities -- putting up crosses at night to replace those torn down by communists during the day.
In Lativa, papal emphasis is on forgiveness and healing