(lo͞osĭtān`ēə), Roman province in the Iberian Peninsula. As constituted (c.A.D. 5) by Augustus it included all of modern central Portugal as well as much of W Spain. The province took its name from the Lusitani, a group of warlike tribes who, despite defeats, resisted Roman domination until their great leader, ViriatusViriatus
, d. 139 B.C., leader of the Lusitani (see Lusitania). One of the survivors of the massacre of the Lusitani by the Roman praetor Servius Sulpicius Galba, Viriatus rose as a popular leader and persuaded his countrymen to resist Roman rule.
..... Click the link for more information. , was killed (139 B.C.) by treachery. In the 1st cent. B.C. they joined in supporting SertoriusSertorius, Quintus
, d. 72 B.C., Roman general. He was a general under Marius but did not take part in Marius' proscriptions. Sertorius was appointed governor of Farther Spain in 83 B.C. but fled to Africa to escape the reprisals of Sulla. He later was summoned (80 B.C.
..... Click the link for more information. , who set up an independent state in Spain. The old identification of Portugal with Lusitania and of the ancestors of the Portuguese with the Lusitanians (hence Camões's great epic was entitled Os Lusíadas) is now largely ignored, but the creation of Lusitania may have had a faint echoing effect in the setting up of the separate kingdom of Portugal many centuries later.

liner under British registration, sunk off the Irish coast by a German submarine on May 7, 1915. In the sinking, 1,198 persons lost their lives, 128 of whom were U.S. citizens. A warning to Americans against taking passage on British vessels, signed by the Imperial German Embassy, appeared in morning papers on the day the vessel was scheduled to sail from New York, but too late to accomplish its purpose. The vessel was unarmed, though the Germans made a point of the fact that it carried munitions for the Allies. The considerable sympathy for Germany that had previously existed in the United States to a large extent disappeared after the disaster, and there were demands from many for an immediate declaration of war. President Wilson chose the course of diplomacy and sent Germany a strong note asking for "reparation so far as reparation is possible." Germany refused to accept responsibility for the act in an argumentative reply, but issued secret orders to submarine commanders not to attack passenger ships without warning. After prolonged negotiations, Germany finally conceded its liability for the sinking of the Lusitania and agreed to make reparations and to discontinue sinking passenger ships without warning. The immediate crisis between the United States and Germany subsided. The incident, however, contributed to the rise of American sentiment for the entry of the United States into World War I, with recruitment posters two years later urging potential enlistees to "Remember the Lusitania!" 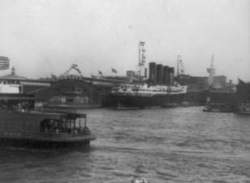 The RMS Lusitania is shown here docked in New York City in 1910. Its sinking in 1915 by a German torpedo was a key event in convincing the United States to enter World War I. Some say Winston Churchill actually helped make the attack possible in order to bring America into the war.

A number of historians still insist that the nearly 1,200 lives lost aboard the RMS Lusitania were sacrificed to the gods of war in an effort to embroil the United States in World War I.

The Lusitania was an ocean liner of the British Cunard Steamship Line that was torpedoed by a German U-boat on May 7, 1915, within sight of the southern coast of Ireland. The sinking of a passenger ship and the loss of 1,195 lives was instrumental in causing the United States to enter World War I and to declare war on Germany and its allies. For over ninety years, the question has been argued whether Winston Churchill, as Lord of the British Admiralty, manipulated events to arrange for the liner’s sinking in order to create an incident that would convince the United States to participate in the conflict against Germany.

The Lusitania and its sister ship, the Mauretania, were considerably smaller and less luxurious than the Olympic and Britannic of the rival White Star Line, but they were much faster and enabled Cunard to provide a weekly transatlantic departure schedule with just two vessels. When the Lusitania sank, she was on her 202d crossing of the Atlantic.

Shortly after World War I began, the British established a blockade of Germany that was eventually responsible for the death by starvation, malnutrition, and disease of 750,000 Germans. Germany’s only hope of destroying the blockade was to sink as many warships as possible, and the feared U-boats were very effective in striving to attain that goal. The Lusitania, a luxury passenger liner and cargo ship, was immune from attack, as were all passenger ships—unless they were suspected of violating the agreement that such vessels would not transport ammunition and explosives to Great Britain.

German intelligence had suspected the fast-moving ships of the Cunard Line of carrying contraband munitions, and the German embassy in the United States issued a public warning to travelers intending to embark for Great Britain that a state of war existed between Germany and its allies and Great Britain and its allies, and the “zone of war” included the waters adjacent to the British Isles. Vessels flying the British flag were “liable to destruction in those waters,” and passengers who chose to travel on the ships of Great Britain or its allies must “do so at their own risk.” It was later learned that some of the wealthiest and most influential passengers had been warned that a U-boat attack was likely against the Lusitania.

Captain Walther Schweiger, commander of submarine U-20, released one torpedo at a distance of seven hundred yards and saw it strike the Lusitania and trigger a second violent explosion. Upon seeing the second explosion, Schweiger felt justified in torpedoing the passenger vessel, for it was obviously carrying munitions under assumed cargo designations. The Lusitania rolled over and sank in about eighteen minutes. Rescuers from Queenstown, Ireland, managed to save 734 from the cold seawater.

The Germans had guessed correctly, for the Lusitania, under the descriptions of bales of fur and boxes of cheese, carried in its hold millions of rounds of rifle ammunition, 1,250 cases of shrapnel shells, and forty-six tons of aluminum powder for the Woolrich Arsenal. The British and American governments accused the U-boat of having launched a second torpedo at the sinking passenger ship, but the Germans steadfastly denied doing so, claiming the munitions on board had caused the second explosion.

If Churchill had engineered the destruction of one of Britain’s finest ships and of 1,195 lives (among them 128 Americans) in a sacrificial act intended to bring the United States into the war, he had succeeded, for the Yanks saw the sinking of the Lusitania as another barbaric attack by the “Huns.”

Conspiracy theorists counter that the British Admiralty, under Churchill’s direction, was well aware that the German U-boat command had issued a warning to all passenger ships that they must travel at their own risk. The Admiralty was also informed that the U-boat responsible for sinking two ships in recent days was still lurking in the waters off the southern coast of Ireland, the path the Lusitania was scheduled to travel. In spite of this knowledge, the Admiralty issued no special warnings to the Lusitania, offered no escort to port, and did not send any destroyers to search for the German submarine. It seems apparent to some researchers that there was a conspiracy to place the Lusitania in jeopardy in order to incite the Americans to enter the war.

However, U.S. isolationist policies continued to maintain their hold on Congress until February 1917, when the German admiral Alfred von Tirpitz announced that U-boats would begin attacking all shipping in the North Atlantic, regardless of national or political allegiance. On February 3 the U.S. broke off diplomatic relations with Germany. On that same day a U-boat sunk the U.S. liner Housatonic off the coast of Sicily. On March 18, German submarines sank three U.S.-registered vessels, the City of Memphis, the Vigilante, and the Illinois, without giving any type of warning. On April 2 President Woodrow Wilson argued that the “world must be safe for democracy,” and on April 6 Congress approved a declaration of war against Germany.

an ancient region of the W Iberian Peninsula: a Roman province from 27 bc to the late 4th century ad; corresponds to most of present-day Portugal and the Spanish provinces of Salamanca and C?ceres
Collins Discovery Encyclopedia, 1st edition © HarperCollins Publishers 2005