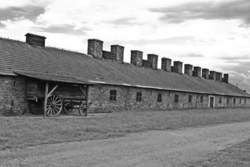 The “cookhouse” at the Auschwitz-Birkenau concentration camp, where thousands of Jews were tortured, starved, and slaughtered by the Nazis.

Today’s Germans take responsibility, both moral and material, for the Holocaust. But some historical revisionists are questioning the horror of the death camps.

On January 24, 2005, the UN General Assembly convened a special session to commemorate the sixtieth anniversary of the liberation of the Nazi death camps. Speakers memorialized the six million Jews who died in the camps in what has become known as the “Holocaust.” The session began a week of tributes worldwide to mark the liberation of the camps. On January 27 a special memorial service was conducted in Auschwitz, Poland, the scene of a death camp where between 1 and 1.5 million prisoners—most of them Jews—died in gas chambers, from disease, or by starvation.

Speakers at the UN General Assembly in New York included Elie Wiesel, winner of the Nobel Peace Prize in 1986; Israeli foreign minister Silvan Shalom; and Russia’s commissioner for human rights, Vladimir Lukin, all of whom warned against a global rise in anti-Semitism and the growing strength of movements that denied the Holocaust.

Sir Brian Urquhart, a retired UN undersecretary general who had been among the soldiers who freed the prisoners held in the death camps in 1945, stated that the world must never forget the Holocaust and the terrible campaign of genocide. The special commemoration at the United Nations served, Urquhart said, “to recall what human beings driven by hatred or fear or some perverse ideology are, against all rational belief, still capable of doing to each other.”

The same week in January 2005 that the United Nations honored the millions of lives lost in the Nazi program of the extermination of Jews, the Holocaust historical revisionists were busy issuing the “facts” behind Auschwitz and the other death camps. Mark Weber, director of the Institute for Historical Review, one of the leading voices in denying the Holocaust, is among those scholars who do not dispute the fact that large numbers of Jews were deported to such camps as Auschwitz and later died there, but he maintains that Auschwitz was not an extermination facility and that stories of mass killings in gas chambers are myths.

Among the assertions made by Weber and other revisionists are the following:

Edgar J. Steele is another Holocaust revisionist who thinks it is complete “rubbish” to claim that six million Jews were gassed and cremated. His explanation is that a Germany that was fighting a war on two fronts, “desperate for fuel and materiel of every sort,” would not have expended energy or bothered to “load millions of Jews on railroad cars and transport them hundreds, even thousands of miles to concentration camps built specifically to house them, where they would be fed, clothed, even tattooed so they could be inventoried, just to kill them.”

What about all the gruesome and unsettling pictorial evidence of the Nazi’s “final solution” to the Jewish problem?

The response of Steele and other Holocaust deniers or revisionists is that the pictures are mostly faked. “All those pictures of skinny people and bodies stacked like cordwood were actually of Czechs and Poles and Germans [who] died of Typhus, which was rampant in the camps,” Steele states. The prominent revisionist Theodore J. O’Keefe cites the findings of Dr. Charles Larson, one of America’s leading forensic pathologists, whom the U.S. Army’s Judge Advocate General’s Corps assigned the grim task of performing autopsies at Dachau and twenty other concentration camps. In a 1980 newspaper interview Larson said that he could not confirm a case of poison gas in the more than one hundred corpses he examined. According to his analysis, the chief cause of death at Dachau, Belsen, and other camps was disease, specifically typhus.

In an article on the liberation of the death camps in the Journal of Historical Review, a revisionist publication, O’Keefe writes that Dr. Konrad Morgen, a legal investigator attached to the Reich Criminal Police, was given full authority by Heinrich Himmler, commander of Hitler’s SS and the Gestapo, to enter any concentration camp and investigate any charges of cruelty and corruption on the part of any camp personnel. According to O’Keefe, before any prisoners could receive corporal punishment, they must first be examined by the camp physician and certified to be in good health. The camp physician was also required to be present for the actual beating. O’Keefe states that because prisoners at the camps were used to advance Germany’s industrial production, the “good health and morale of the prisoners was critical.”

In Germany today there is very little official denial of the Holocaust, and accounts of Nazi war crimes are taught freely in German schools. On May 10, 2005, the Memorial to the Murdered Jews of Europe officially opened in Berlin. Consisting of 2,711 dark gray concrete steles in a cemetery-like field, the memorial is located in the heart of the city, near the Brandenburg Gate. “The memorial’s size and central location are widely seen here as testimony to the centrality and uniqueness of the Holocaust among the many crimes of the Nazis, as well as to the willingness of Germany to accept responsibility, both moral and material, for the Nazi’s crimes,” Richard Bernstein wrote in the New York Times.

Feedback
Flashcards & Bookmarks ?
Please log in or register to use Flashcards and Bookmarks. You can also log in with
Flashcards ?
My bookmarks ?
+ Add current page to bookmarks
References in periodicals archive ?
A less acerbic critic than Bauman and Finkielkraut may argue that the claim for the privileged subject position of victim and witness expresses the wish that an authentic memory of the Holocaust, that is, the historical witnesses' primary memory, could be maintained forever, especially as a defense against so-called Holocaust revisionists. This wish, however understandable, is obviously impossible to fulfill since the subject position of historical witness, who experienced the crimes first-hand and can therefore pass the knowledge on as communicative memory, to use Maurice Halbwachs' concept, can by definition not be transferred to anyone else.
Vicarious Victimhood as Post-Holocaust Jewish Identity in Erica Fischer's Auto/Biography Aimee and Jaguar
According to Desbois, many graves and bodies were lost or destroyed In that way, and the absence of proof would later provide fuel for Holocaust revisionists.
A priest bears witness: Father Patrick Desbois is on a mission to uncover the mass graves of nearly two million Jews. 60 year after the holocaust, time is running out
Far from it; the Nizkor website maintained by the Simon Wiesenthal Centre lists approximately 400 Holocaust Revisionists who operate internationally via the internet, and are thus known outside their immediate enclaves.
"And thou shalt bind them as a sign upon thy hand": Eve's Tattoo and the Holocaust Consumer
But putting aside the virile hate directed against those who question the veracity of the typical Holocaust narrative, what is it that these people believe and say at the risk of imprisonment and bodily harm?Aa For most Holocaust revisionists or deniers if you prefer, their arguments boil down to three simple contentions: 1.Aa HitlerAAEs AoFinal SolutionAo was intended to be ethnic cleansing, not extermination.
What does AaeHolocaust denialAAE really mean?
Buchanan.org, his official Web site, hosts, on a "Buchanan Brigade Forum" for registered members of the site, a long discussion thread in which Holocaust revisionists compare notes with each other and heap venom and vitriol on Jews.
Buchanan's Holocaust denial forum disappears
There are so many Holocaust deniers, or more politically correct "Holocaust Revisionists," that it is difficult to keep up with their claims, many of which are ludicrous in the light of the preponderance of facts.
Holocaust Denial
Holocaust revisionists like David Irving seemed to be chipping away at every dreadful bone-deep truth he knew.
New books
Yet he consistently refers to all Holocaust revisionists as "deniers" even though they vary substantially in their degrees of doubt and denial.
WHY PEOPLE BELIEVE WEIRD THINGS: PSEUDOSCIENCE, SUPERSTITION, AND OTHER CONFUSIONS OF OUR TIME
The government has banned a conference that Holocaust revisionists planned to hold in Beirut on March 31.
LEBANON - March 27 - Holocaust Revisionists Conference Banned
Kaplan concludes that Brasillach was guilty, but should not have been shot because "the myth of a martyred innocent gives sustenance to the extreme right" and to the Holocaust revisionists. If he had lived, the notorious criminal would not have been able to hide his Fascist past under a respectable academic disguise, like Paul de Man and Mircea Eliade.
The Collaborator: The Trial and Execution of Robert Brasillach
The story of how Leuchter got caught up in the world of the Holocaust and its deniers is told largely through his own words and those of a handful of others--principally his former wife and stepson; Ernst Zundel and David Irving, more professional Holocaust revisionists; and Robert Jan van Pelt, the eminent Auschwitz historian.
MONSTER AND MAN
He recounts debates with creationist Duane Gish before college audiences and with Holocaust revisionists Bradley Smith and David Cole on the Donahue show.
Why People Believe Weird Things: Pseudoscience, Superstition, and Other Confudions of Our Time
Encyclopedia browser ?
Full browser ?
CITE
Site: Follow: Share:
Open / Close