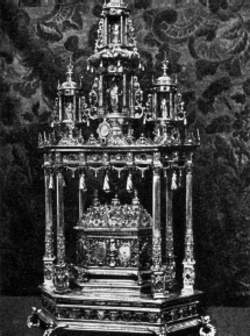 A bottle containing what many believe to be the blood of Jesus is kept in a chapel at Bruges, Belgium. Once a year, on Ascension Day, the bottle is carried through the city during the Procession of the Holy Blood. Fortean Picture Library.

On Ascension Day each May, visitors to and citizens of the city of Bruges, Belgium, participate in the Procession of the Holy Blood, an annual pageant in which a bottle believed to contain the blood of Jesus Christ is carried through the city. The activities include a reenactment of the arrival of the Count of Flanders, who brought the bottle to Bruges originally in the thirteenth century.

Throughout the year, the vial of blood is kept in the chapel of the Holy Blood on the central square in Bruges. The church was originally built in the twelfth century, with a second story added in the fifteenth. It has subsequently gone through several extensive renovations. The blood, originally kept on what is now the ground level, rests on a silver altar in the church’s upper level. It is on public view each Friday and every day from May 3 through May 17. Adjacent to the church is a museum that details the story of the Holy Blood and contains other items of value owned by the church.

The bottle that contains the substance, which is believed to be blood, is made of crystal and seems to date to the eleventh or twelfth century. It was probably made in Constantinople (modern-day Istanbul) as a container for perfume. The occasion for the bottle and its blood being brought to Belgium was the Sixth Crusade in the 1220s. Jerusalem fell to the Muslims in 1244. The earliest mention of the annual procession is from a charter of the Unloaders’ Guild from 1291.

Although the procession is part of the annual May festivities, the tradition that Diederik van den Elzas, Count of Flanders, brought drops of the Holy Blood from Jerusalem in 1149 and the belief that said blood was preserved by Joseph of Arimathea, the person mentioned in the Bible as facilitating the burial of Jesus after the crucifixion, are generally discounted today.

Feedback
Flashcards & Bookmarks ?
Please log in or register to use Flashcards and Bookmarks. You can also log in with
Flashcards ?
My bookmarks ?
+ Add current page to bookmarks
Mentioned in ?
References in classic literature ?
or, the holy blood, I will spit you all like ortolans!"
View in context
The Basilica of the Holy Blood Bruges lay claim to a relic purported to be the blood of Christ, making it a known destination for sacred pilgrimages.
I know there is a God because..
The Basilica of the Holy Blood, Burg 13, is a mighty icon that entails of two churches in one; Romanesque and neo-gothic styles under one roof.
STUNNING CITY IS A LIVING MUSEUM
News about alleged drug users and pushers is with us every morning, at the crack of dawn, at the start of our day-the promise of a new society without the bad people, purged by men in uniform, and cleansed with the holy blood of those whose life has been offered to immorality.
My mother is worried
Religious offerings The Romanesque Basilica of the Holy Blood has been a keeper of a relic of Christ since 1149.
FLANDERS KEEPERS; The Christmas market brings a twinkling festive wonderland to Bruges and there is fantastic food and drink to feast on when you take a break from the shop stalls
There is also the medieval "double church" of the Basilica of the Holy Blood, which has a Romanesque church below and a neo-Gothic chapel above (holyblood.com).
City guide Bruges
She is even named in later sources (erroneously, Dockray-Miller concludes) as the donor of the Abbeys most prized possession, the relic of the Holy Blood.
Dockray-Miller, Mary, The Books and the Life of Judith of Flanders
Al-Obeidi confirmed: "The importance of the Hungarian support for Iraq, since it is one of the EU countries and to its help to Iraq represents all European countries' help to Iraq, as Iraq today is fighting terrorism on behalf of the whole world and it offers holy blood and massive sacrifices for the elimination of terrorism."
Defense Minister: Iraqi Offers Holy Blood And Great Sacrifices To Eradicate Terrorism On Behalf Of The World
The texts consider such matters as the pyramids before The Flood, flying chariots and ancient astronauts, Atlantis and other lost civilization, lost wisdom of the ancients, high technology in ancient times, mysteries of the Americas, pre-Columbian trans-Atlantic contacts, and holy blood and Holy Grail.
Foundations of Atlantis, Ancient Astronauts and Other Alternative Pasts: 148 Documents Cited by Writers of Fringe History, Translated With Annotations
Atkin compares the staged events, seemingly miraculous, to the miracles claimed by the monks of Hayles Abbey at the display of their relic of the Holy Blood, which would be revealed by reformers to be false ("it is but duckes bloode," 61).
Tamara Atkin. The Drama of Reform: Theology and Theatricality, 1461-1553
"Good evening Gaza, which has become a model for steadfastness and martyrdom and the redemption of the holy land with holy blood (...)" said Al Manar TV.
Lebanon media institutions air one news bulletin: Palestine you are not alone
Max Field has finally completed his second book - Sacred Connection of the Holy Blood - which he believes sheds light on enigmas such as the fate of Jesus Christ and Mary Magdalene, the history of the Templars and Carthusians, and ancient links between England and France.
Uncovering mysteries of past