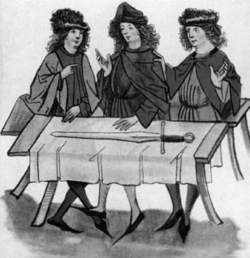 In the fifteenth century, the Holy Vehm was a court that persecuted Christian heretics. It continued to exist secretly for centuries, and some say it aided the Nazis in the 1930s.

The Holy Vehm, a secret society dedicated to the murder of Christian heretics, surfaced as an ally of the Nazis in Germany in the 1930s.

In the 1930s, with the rise of the Nazis to power in Germany, the secret society known as the Chivalrous Order of the Holy Vehm came into the open for the first time in its seven-hundred-year history, focusing its bigotry and violence upon the Jewish people, judging them to be guilty of heresy. The Holy Vehm (or Fehm) had been formed in the middle of the thirteenth century as a secret vigilante society composed of free men and commoners to protect themselves from marauding outlaw bands and mercenaries roaming the lawless territory between the Rhine and the Weser Rivers in Westphalia, Germany. In the beginning the resistance group had the approval of both the church and the Holy Roman Emperor, but as time passed the Holy Vehm became a law unto itself, passing judgment on all those whom it decided should receive a death sentence. The name “Vehm” or “Fehm” was a corruption of the Latin word fama, a law founded upon a common or agreed-upon opinion. However, “Fehm” could also mean something that was set apart, and the leaders of the Holy Vehm soon decided that their crusade against evildoers had set them apart and above the laws that governed others.

Because the society began with only a handful of members and violent retribution could be expected from any gang of outlaws who might learn the identities of those commoners who dared to oppose them, an oath of secrecy was imposed upon all who had the courage to join the Vehm. During the initiation ceremonies, candidates vowed to kill themselves, and even their spouses and children, rather than permit any society secrets to be betrayed. Once the oath had been made, one of the Vehm’s Stuhlherren, or judges, who held the highest rank within the society, would move his sword across the initiates’ throats, drawing a few drops of blood to serve as a silent reminder of the fate that awaited all traitors to the society. Below the judges in rank were the deputy judges, the Freischoffen, and the executioners, the Frohnboten.

Within a few decades of its formation the Vehm had over 200,000 free men and commoners in its ranks—each sworn to uphold the Ten Commandments and to eliminate all heresies, heretics, perjurers, traitors, and servants of Satan. The harsh and punitive secret courts (Heimliches Gericht) always met at midnight in order to create an even more sinister and frightening effect. Those suspected of witchcraft or heresy were tried by the “forbidden court” (Verbotene Acht) and the “secret tribunal” (Heimliches Acht), both of which were conducted by the Black Vehm, a splinter group of the Holy Vehm. Because of the great power that the Vehm acquired, it conducted trials of noted outlaws and thieves in village squares or market places in the full light of day.

When the outlaws and thieves had been largely driven from Westphalia, the Vehm turned its full attention to those men and women suspected of heresies or of betraying the commandments of God. Before suspects came to court, they were served with three summonses, each of which gave them the opportunity of attending voluntarily. Each summons also gave the accused a period of consent of six weeks and three days. Because the tribunals of the Vehm had gained a reputation of pronouncing only death sentences, few people attended the courts of their own volition. Those who tried to escape were condemned without the usual pretense of a trial, and Vehm executioners were assigned to hunt them down.

Regardless of the charges levied against those heretics the Vehm accused, the sentence was always death by hanging. If any spoke on behalf of their accused friends, they were likely to be hanged as well, for giving false witness to defend a heretic or a traitor. On those rare occasions when the tribunal failed to convince even its own members of an accused individual’s guilt, that unfortunate person was hanged anyway to preserve the secrecy of the tribunal. There appears to be no record of any of the secret courts’ ever finding anyone innocent. But then the Vehm never kept any records. In spite of the lack of documentation, historians have estimated that thousands of men and women—the innocent along with the guilty—were dragged to one of the Vehm’s secret courts.

Although eventually condemned by the church and German state, the secret society remained active in a diminished capacity. Toward the end of the nineteenth century, it went underground and seemingly ceased all acts of violence until the advent of the Nazi Party in the 1930s. The Holy Vehm appears to have been destroyed with its Nazi allies in the fall of the Third Reich in 1945.