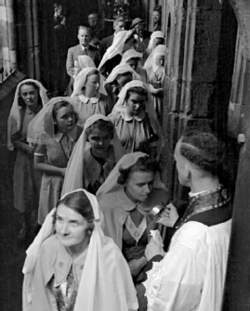 The faithful regularly flock to the site where Saint Winefride was healed after being beheaded in the seventh century by the cruel prince Caradoc. Holywell, as the name implies, is a well said to contain miraculous healing waters. Getty Images.

Holywell, or Saint Winefride’s Well, the most prominent healing site in Great Britain, dates to the seventh century. Around 660 CE, a young woman named Winefride refused the advances of a local prince named Caradoc. Refusing to take “no” for an answer, he drove the woman to seek sanctuary in the local parish church. Before she could reach the church, however, he overtook and beheaded her.

At this point legend takes over. As the story proceeds, a spring of water emerged at the spot where her head lay on the ground. The water’s healing powers were initially put to use by Winefride’s uncle, who reunited the head to the body. After he offered a prayer, Winefride was resurrected and lived another 15 years as a nun. The area around the spring grew into the present-day city of Holywell, Wales.

She was buried at Guetherin, Wales, but in the twelfth century her body was exhumed and taken to Shrewsbury in England. The church at Shrewsbury became a new pilgrimage site without negatively affecting the number of pilgrims traveling to Holywell, where the waters were gathered in a pool and a chapel erected over it. Steps were created for easy access to the water for those who wished to immerse themselves. It joined a number of other holy water sites across Great Britain.

In the fifteenth century, the mother of Henry VII saw to the construction of a larger stone building over the pool. The internal walls were decorated with pictures of Winefride’s life. It appears the shrine to Saint Winefride was particularly favored by Lady Margaret, the grandmother of Henry VIII, which may be why Henry skipped the destruction of the site when he moved against other Catholic sites in the 1530s. Still, the body and relics of Saint Winefride were taken from Shrewsbury and lost. As Great Britain became predominantly Protestant, the well remained a popular pilgrimage spot. Today the walls are covered with graffiti written by people who have been healed over the centuries.

Since Catholics again attained legal status in Great Britain in the nineteenth century, the Jesuits have managed the site. In 1851 and 1887, Rome assisted in a new emergence of the well into prominence by issuing indulgences for pilgrims. Saint Winefride’s feast day is July 22, and the following Sunday each year is a national day for pilgrimage to Holywell. The pilgrimage includes a procession during which a reliquary containing the only surviving relic (Saint Winefride’s finger) is marched from the town to the well.

Feedback
Flashcards & Bookmarks ?
Please log in or register to use Flashcards and Bookmarks. You can also log in with
Flashcards ?
My bookmarks ?
+ Add current page to bookmarks
Mentioned in ?
References in classic literature ?
Sharp lent him cheap novels from Holywell Row, which Philip read in his cubicle with a sort of wonderful fear.
View in context
My name is Riccon Hazel, and I come from Holywell, in Flintshire, over by the River Dee.
But stout Riccon of Holywell skipped and leaped and danced for joy of the fair suit of Lincoln green that he had so gotten.
View in context
HOLYWELL is a Cheltenham Festival horse to his very core - and can prove the point by landing the meeting's feature race.
PUT FAI REWAR ITH IN HOLY TO RD FOLLOWERS
Holywell Green is hosting the second cake-baking competition to raise funds for the Holywell Community Pub Ltd campaign.
Bake-off support for pub
A PROTEST picnic is taking place in Southam today as families step up their campaign against a plan to build a housing estate on the historic Holywell field.
Picnic protest against new estate
A murder probe is under way after her body was found at the house in Wallridge Drive, Holywell, Northumberland, at noon on Monday.
Tributes to woman after body is found; Two arrested on suspicion of murder
day IT may seem a bit bold for Holywell people to make suggestions concerning Flint - but at the risk of appearing "nuts" here goes: Members of Transition Holywell & District were interested to see the new masterplan for Flint - especially the proposed enhancements to the beautiful natural setting of the castle - including the planting of trees to screen the mediocre views to the east.
Food for thought on masterplan; LETTERS
Rubbish was dredged from the Seaton Burn at Holywell Dene, near Seaton Delaval.
DENE DREDGE SUCCEEDS
A PROPOSED pounds 10m hospital for Holywell is not expected to open for patients until the end of 2005.
Holywell hospital to open in 2005
HOLYWELL Town rounded off their pre-season with a 7-0 win over Llandudno Junction.
Ketley signs as Wellmen score seven; Holywell Town
Peacefully in hospital aged 89 years, and of Llwyn Aled, Holywell. Husband of the late Barbara Roberts, and much loved father and father-in-law of Linda & Edmund, Julie & David.
Deaths