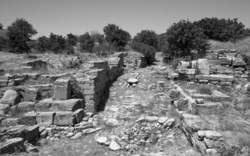 The ruins of the ancient city of Troy, which was depicted in Homer’s epic Iliad, are located in modern Turkey. Like other Greek playwrights, Homer used dreams in his works as an important plot development tool.

Many traces of Egyptian thought, as well as ideas associated with ancient Mesopotamia and Persia, are found in Greek notions about dreams. Some themes in Greek thinking about dreams, such as the belief that dreams are divine and the belief that they may mean the opposite of what they seem to, are similar to ideas in the Near East. It is difficult to determine whether this reflects direct influence or whether it indicates simply parallel development.

The Greeks drew a fundamental distinction between “true” and “false” dreams. Within the class of true and significant dreams, several distinctions can be found. For instance, in a classification transmitted by Artemidorus, Macrobius, and other writers, significant true dreams can be broken down into symbolic dreams, the meaning of which cannot be understood without interpretation; the horama, or visions, which predict future events; and the chrematismos, or oracles, which reveal without symbolism what will or will not happen, or what should or should not be done.

Homer, whose epics present disparate attitudes toward dreams, maintained that “true” dreams come through what the Greeks referred to as the gate of horn, and “false” dreams through the gate of ivory, and the Odyssey makes it plain that not all dreams are truthful. In Homer’s epics, the dream is always of a personified divine being that is independent of time and space and appears to the dreamer at the head of his bed, eventually disappearing. The primary function of dreams in the Homeric epics, particularly in the Odyssey, is to promote the development of the plot. In the Iliad, Homer employed this device only once as a means of advancing the plot. However, the free structure of the Iliad forced Homer to use other artifices, such as daytime visions, the physical appearance of living deities, and other divine manifestations because the use of dreams was not adequate.

It is different with the Odyssey, in which the dream is more frequently used to forward the action of the plot. Yet, the influence of the dream on the story is more subtle. For instance, it considerably affects the plot by encouraging Penelope and providing Nausicaa’s nocturnal vision, the influence of which is extended by a long chain of events that form the story. In other cases the dream may simply provide the atmosphere, and prepare the reader for what is to come.

Homer does not use dreams solely to give indications about what is going to happen in the future. Dreams, which are part of divination, are also employed to show what should be done to avoid transgression of the divine will, as in the episode in which Achilles wants to consult an official seer to know the will of the gods. Thus, in the Odyssey, in which the plot is staged largely on earth and not on Olympus (as it is in the Iliad), Homer uses dreams as the means through which the gods act.

In both the Iliad and the Odyssey, Homer introduces dreams during a crisis. In the Iliad Zeus is generally regarded as the source of the dreams, and the receiver is in each case a male. In the Odyssey the goddess Athena is usually responsible for the majority of the dreams, which are always experienced by women.