Also found in: Dictionary, Thesaurus, Medical, Financial, Wikipedia.
The following article is from The Great Soviet Encyclopedia (1979). It might be outdated or ideologically biased.

groups of related (having the same chemical functions and the same type of structure) organic compounds that differ from one another only by one or more methylene (CH2) groups. (The CH2 group is called the homologous difference.)

Homologous series are known for saturated hydrocarbons (alkanes) of the general formula CnH2n+2 (methane CH4, ethane C2H6, propane C3H8, and so on), unsaturated hydrocarbons (alkenes) of the general formula CnCH2n (ethylene C2H4, propylene C3H6, butylene C4H8, and so on), and saturated monohydric alcohols of the general formula CnH2n+1OH (methyl alcohol CH3OH, ethyl alcohol C2H5OH, propyl alcohol C3H7OH, and so on). Homologous series are often named for their first member (for example, methane series, ethylene series, and so on). The compounds of each homologous series (especially the middle members) are characterized by relatively regular changes in certain physical properties. Thus, the boiling points of neighboring members in the middle of a homologous series (for compounds with an unbranched chain) differ by approximately 20°-25°C. (In higher members of a series this magnitude gradually decreases.) For example, alcohols with a linear chain —n-propyl [CH3CH2CH2OH], n-butyl [CH3CH2—CH2— CH2OH], n-amyl [CH3CH2CH2CH2CH2OH], and n-hexyl [CH3(CH2)4CH2OH]—boil, respectively, at 97.4°, 117.7°, 137.8°, and 157.2°C. Also corresponding to changes in composition by the homologous difference are changes including molecular size (by a constant magnitude), heat of combustion (by 628.02–669.89 kilojoules [150–160 kilocalo-ries]), and molecular refraction (by 4.6).

The concepts of homologous, isologous, and genetic series play an important role in the systematization and classification of compounds in organic chemistry (see Figure 1); they were first clearly formulated by C. Gerhardt in 1844–45. 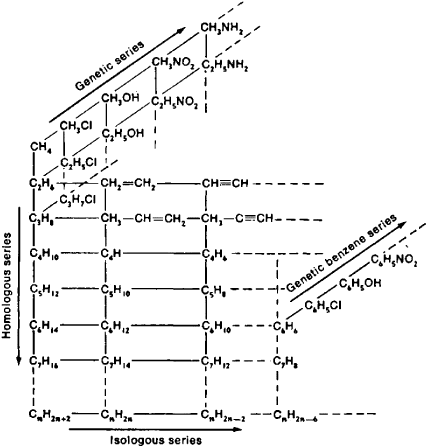 Feedback
Flashcards & Bookmarks ?
Please log in or register to use Flashcards and Bookmarks. You can also log in with
Flashcards ?
My bookmarks ?
+ Add current page to bookmarks
Mentioned in ?
References in periodicals archive ?
(1977) Chemistry and crystallograpby of the lillianite homologous series. Neues Jahrbuch fur Mineralogie, Abhandlungen, 130, 264-287.
The IMA Commission on New Minerals and Mineral Names: Procedures and Guidelines on Mineral Nomenclature 1998
These are members of a chemically and structurally homologous series, [AB.sub.2n+1][O.sub.4n+5] with 3 < n < 6 with respective compositions of [BaTi.sub.3][Nb.sub.4][O.sub.17] [BaTi.sub.5][Nb.sub.4][O.sub.21], [BaTi.sub.7][Nb.sub.4][O.sub.25], and [BaTi.sub.9][Nb.sub.4][O.sub.29].
The crystal structure of various homologous series have been investigated in this laboratory.
The first perovskite homologous series can be described with the formula of [A.sub.n][B.sub.n][O.sub.3n+2] (A = Sr; B = Ti, Nb).
The compounds of the perovskite homologous series [A.sub.n][B.sup.n-1][O.sub.3n] have a rhombohedral structure, and the thickness of the slab is (n - 1) units of octahedra (83).
Phase equilibria and crystallography of ceramic oxides