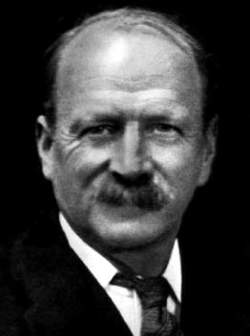 William Hope was a controversial spirit photographer. He was accused of fraud several times, but there seems to have been circumstances beyond his control that lent others the opportunity to make it appear that Hope was at fault. Nandor Fodor states, “The great number of signed testimonies, with a detailed account of the precautions taken, speaks in an impressive manner for the genuine powers of Hope.”

A carpenter by trade, in 1905 William Hope took a photograph of a workmate. The incident took place at the factory where both men worked, in Crewe, Cheshire, England. When the picture was developed, the plate showed a young woman standing beside his friend. She was transparent, with the brick wall behind her showing through. Hope’s friend immediately recognized the figure as his deceased sister. Hope said, “I knew nothing at all about Spiritualism then. We took the photograph to the works on Monday,and a Spiritualist there said it was what was called a Spirit photograph. He suggested that we should try again on the following Saturday at the same place with the same camera, which we did, and not only the same lady came on the plate again, but a little child with her. I thought this very strange, and it made me more interested, and I went on with my experiments.”

On the basis of these photographs, the two friends formed a development circle of six, helped by a Mrs. Buxton, organist of the Crewe Spiritualist Hall. Fearing that Roman Catholics might hear of their experiments and accuse them of being in league with the devil, they destroyed all the plates they developed immediately after use. It wasn’t until 1908 that Archdeacon Colley found out about the group, questioned Hope, and told him not to destroy any more. The Archdeacon sat with the Crewe Circle for the first time on March 16, 1908. He brought his own camera, diamond-marked plates and dark slides, and development plates with his own chemicals. Hope had only to press the bulb for the exposure. This he did. On one of the resultant plates there appeared two spirit figures.

The Archdeacon recognized one of the spirit extras as his deceased mother, who had never actually been photographed. But Hope thought it looked like a woman in a photograph he had copied two years earlier. He took the picture to Mrs. Spencer, of Nantwich, who thought she recognized the figure as her grandmother. But the Archdeacon was equally certain it was his mother and advertised in the Leamington newspaper inviting all who remembered his mother to meet with him at the rectory. Eighteen people chose the photograph from several others and said the figure was definitely the Archdeacon’s mother.

Hope willingly allowed himself to be investigated over a number of years. Sir William Crookes, the physicist and great psychical researcher, in the Christian Commonwealth of December 4, 1918, described his sitting with Hope, where Crookes used his own marked plates, under his own conditions, and obtained a picture of his deceased wife. Sir William Fletcher Barrett, Professor of Physics at the Royal College of Science for Dublin, and one of the most distinguished of psychical researchers, claimed to have received from Hope “indubitable evidence of supernormal photography.”

In 1922, there was a controversy when Harry Price, the well known researcher, published a report in the Journal of the Society for Psychical Research (SPR) charging Hope with fraud. Price sat with Hope on February 24, 1922, at the British College of Psychic Science where the photographer produced a spirit photograph. Price claimed that plates had been switched from a marked set that had been provided. It turned out that the package had been interfered with by someone unknown while it was in the offices of the SPR for a period of four or more weeks. Nothing was proven either way, but Harry Price subsequently said that the test “does not rule out the possibility that Hope has other than normal means.”

Hope continued to make himself available for any and all tests. He ignored any criticisms and for the photographs never charged more than his hourly rate as a carpenter. He became a very devout Spiritualist, relying on the advice of his spirit guides for everything he did. He died on March 7, 1933, at age seventy.

Feedback
Flashcards & Bookmarks ?
Please log in or register to use Flashcards and Bookmarks. You can also log in with
Flashcards ?
My bookmarks ?
+ Add current page to bookmarks
References in periodicals archive ?
Recalled by Racecourse manager Brian Little at the beginning of last month in the place of the suspended Richard Hope, Williams has since played his part in the club's best run of form this season - just one defeat in the last eight matches.
Football: Williams: I won't lose my head
GILLINGHAM: Bullock, Wallis, Cox, Hope, Williams, Flynn, Collins, Crofts, Saunders, Harris, Jarvis, Crichton, Spiller, Jackman, Jones.
Football: Skora in at deep end for Walsall
Encyclopedia browser ?
Full browser ?
CITE
Site: Follow: Share:
Open / Close