see astrologyastrology,
form of divination based on the theory that the movements of the celestial bodies—the stars, the planets, the sun, and the moon—influence human affairs and determine the course of events.
..... Click the link for more information. .
The Columbia Electronic Encyclopedia™ Copyright © 2013, Columbia University Press. Licensed from Columbia University Press. All rights reserved. www.cc.columbia.edu/cu/cup/ 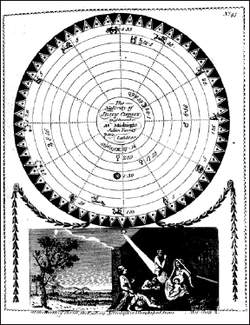 An engraving of the famous horoscope of Jesus Christ’s birthdate from Ebenezer Sibly’s A New and Complete Illustration of the Occult Sciences, 1790. Reproduced by permission of Fortean Picture Library.

Among contemporary astrologers, the term horoscope (from the Greek hora, meaning “hour,” and skopos, meaning “watcher”) is used to refer to any astrological chart. Because of the popularity of newspaper astrology, which often presents itself as a “horoscope,” the word has become synonymous with “daily prediction” in the minds of the general public. Prior to the eighteenth century, however, a horoscope was applied only to the ascendant, which is the sign on the eastern horizon at the moment for which the chart is constructed.

a diagram for so-called prediction of the future in the erroneous study of astrology. Horoscopes arrange the planets in 12 “houses” according to their position in the heavens at the moment of a person’s birth or the occurrence of a given event. Using the influence of the position of heavenly bodies (primarily planets) on terrestrial events, astrology “predicts” a person’s future or the outcome of an event.

1. the prediction of a person's future based on a comparison of the zodiacal data for the time of birth with the data from the period under consideration
2. the configuration of the planets, the sun, and the moon in the sky at a particular moment
3. a diagram showing the positions of the planets, sun, moon, etc., at a particular time and place
Collins Discovery Encyclopedia, 1st edition © HarperCollins Publishers 2005