Also found in: Dictionary, Thesaurus, Wikipedia.
Related to Howard Hughes: Katharine Hepburn
The following article is from Conspiracies and Secret Societies. It is a summary of a conspiracy theory, not a statement of fact. 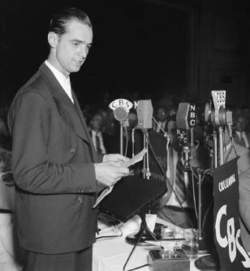 A young Howard Hughes speaking at a 1938 gathering of the Press Club in Washington, D.C. The billionaire playboy fancied himself a secret agent.

The eccentric billionaire aviator, manufacturer, and Hollywood playboy had a fantasy life in which he saw himself as a secret agent.

If a novelist invented a character like Howard Hughes, readers would think that the author had pushed the envelope of believability and crossed into pure fantasy. Harold Robbins’s biggest bestseller, The Carpetbaggers (1961), and the subsequent motion picture of the same name were loosely based on Hughes’s life. The Aviator, an Academy Award nominee for best picture in 2004, was the director Martin Scorsese’s and the actor Leonardo di Caprio’s take on Howard Hughes. Hughes was a cowboy, an aviator, a manufacturer, a Hollywood playboy who made love to some of the most beautiful movie stars of the era, a Hollywood producer who made motion pictures with the most beautiful actresses of the era, a patriotic military contractor, and a maverick financier. What more could he ask of life, one might ask.

Howard Hughes had a secret wish that he had to fulfill vicariously through others. The billionaire had a fantasy life in which he sometimes envisioned himself as an espionage agent, a spy, a member of the CIA.

To fulfill one aspect of his secret life, Hughes became a very substantial backer of the CIA—so substantial that he was known to the insiders as the “Stockholder.” The ultraconservative Hughes also liked to dabble in politics, and during the 1960 presidential campaign he decided that Richard Nixon was his candidate. Hughes especially liked the way that Nixon had gone after the Communists. Hughes liked Nixon so much that he loaned Nixon’s brother Donald $205,000 to help get his Nixonburger restaurants in the black. John F. Kennedy’s crew learned of the loan and made presidential hay out of the secret money exchange.

Hughes offered President Lyndon B. Johnson and President Nixon each a million dollars to call a halt to nuclear testing in Nevada. By the mid-1960s Hughes had already become something of the hermit that he would later become in full force, and he believed that fallout from the tests would drift in the windows of his Las Vegas penthouse and affect his personal health.

It may never be decided for certain, but a number of senators and other investigators for the Senate Watergate Committee believe that Hughes played a major, if shadowy, role in the notorious scandal. The matter was not pushed as far as it might have been, for a number of senators would have been embarrassed if the public learned how much money Hughes had given to their campaigns.

It was in the late 1950s that the billionaire hired his very own spook, Robert Maheu, who had been with the FBI and had owned a private security firm that worked for the CIA on ultrasensitive, slightly illegal, secret projects. Maheu had proven himself versatile to the point of having served as everything from the Agency’s pimp for foreign dignitaries to mastermind of a failed attempt to assassinate Fidel Castro. Maheu was also tight with the mob bosses John Roselli, Sam Giancana, and Santos Trafficante, associations that helped smooth Hughes’s settling into Las Vegas. Hughes, the adventurer, the daring aviator, the financier, lived vicariously the life of a CIA operative through the exploits that Maheu recounted for his enjoyment. Maheu also intimidated blackmailers who tried to squeeze his boss with gossipy tidbits about his many love affairs and, at the same time, kept tabs on dozens of Hollywood starlets toward whom Hughes felt jealous and possessive—whether he knew them or not.

By 1970 Hughes was becoming increasingly reclusive and his germ phobia had taken control of his very existence. Rare photographs taken at this time were in sharp contrast to the handsome tuxedo-attired playboy of the Hollywood years. Greasy, shoulder-length hair framed his face and his eyes seemed fogged with drugs; his bare feet with long, carpet-snagging toenails could no longer be squeezed into his cowboy boots; his snaggled, decaying teeth would no longer invite a starlet’s kiss. His tall, once hardy figure was now withered and emaciated. The only women surrounding him now were his Mormon nursemaids. People wondered how someone who had such a fear of germs could appear as though he never washed.

It was in such a condition that Hughes somehow managed to travel to the Bahamas and actually meet face to face with Nicaraguan dictator Generalissimo Anastasio Somoza and a U.S. ambassador. Later, much to the concern of his custodian Bill Gay, Hughes demanded once again to pilot a plane, just as he had done in his glory days.

Hughes’s last fling with fame occurred when Gay authorized the Glomar Explorer, Hughes’s massive ship, to assist the CIA in a covert operation to retrieve a sunken Soviet submarine that contained top-secret code books. When news of the expedition leaked and hit the media, Howard Hughes was once again the legendary larger than life hero.

It was doubtful that Hughes realized that he was once again in all the tabloids. On April 5, 1976, Hughes’s cadaver was flown from Acapulco to Houston. The fingerprints of the ninety-pound shell of the once vibrant six-foot-three cowboy had to be sent to the FBI for verification that the body was that of Howard Hughes.

Feedback
Flashcards & Bookmarks ?
Please log in or register to use Flashcards and Bookmarks. You can also log in with
Flashcards ?
My bookmarks ?
+ Add current page to bookmarks
Mentioned in ?
References in periodicals archive ?
The Howard Hughes Corporation is leveraging the Seaport District's history as the birthplace of innovation, as it transforms a district spanning several city blocks, creating approximately 450,000 square feet of dynamic culinary, fashion, entertainment and cultural experiences.
Civitas Capital Group closes loan for seaport district redevelopment
In a statement, Howard Hughes said it would announce plans for the 250 Water Street site at a later date.
Howard Hughes pays $180M for Milstein parking lot
"Warren Beatty is Howard Hughes," Goldman said in 2010.
Getting better with age
"Howard Hughes wants to redefine it." (Literally as well as figuratively: the neighborhood has been rebranded the Seaport District.)
Sea change: a tourist mecca's new clean-lined boutique is luring New York's design cognoscenti
The Summerlin property, assembled by Howard Hughes Jr.
VCC goes big in vegas with $344M project
Shtulman commented about the sale that "Howard Hughes Corp.
STREAM Capital Partners Sells Land Underneath General Growth Properties Headquarters
"We are pleased to partner with the most respected and well established grocer in the state of Utah," says Grant Herlitz, president of The Howard Hughes Corporation.
Smith's food & drug to be included in Cottonwood development
Otash says in his notes that when the house was wired, Monroe was not part of the plan and it was to find out what the Democrats were up to on behalf of Howard Hughes and Nixon.
Marilyn Monroe 'secretly taped having sex JFK'
"What do you mean 'Howard Hughes wanted you to work for him'?" She had my attention now.
The Eternal Glory That Is Ham Hocks
"Hidden Genius: Frank Mann, The Black Engineer Behind Howard Hughes" looks at one of the many minds behind the success of Howard Hughes.
The Biography Shelf
Summary: Jane Russell, the busty brunette who shot to Hollywood fame as the star of Howard Hughes' The Outlaw, has died of respiratory failure.
Marilyn co-star dies aged 89
Siguiendo esta misma filosofia, iniciativas como la del Instituto Howard Hughes hacen factible la creacion de un escenario virtual en forma de laboratorios para la ensenanza de la Biologia, la Quimica, la Fisiologia, y la Medicina en los primeros cursos universitarios y los ultimos anos de la escuela superior (Howard Hughes Medical Institute, 2007).
Los laboratorios virtuales de biotecnologia del Instituto de Medicina Howard Hughes: una modalidad de educacion a distancia