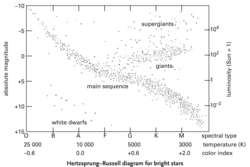 A plot of the redshift of galaxies against their distance (see illustration) or of redshift against apparent magnitude. Apparent magnitude is a crude measure of galactic distance, the value for the brightest or the third or tenth brightest member of a cluster of galaxies commonly being used. See Hubble constant; Hubble's law.
Collins Dictionary of Astronomy © Market House Books Ltd, 2006