(redirected from Hurricane karina)
The following article is from Conspiracies and Secret Societies. It is a summary of a conspiracy theory, not a statement of fact. 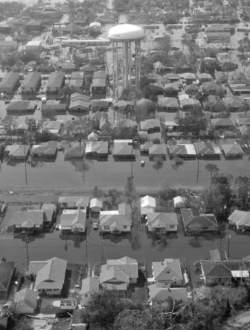 Flooded homes in a New Orleans neighborhood after Hurricane Katrina destroyed much of the city in 2005.

The wrath of Hurricane Katrina hit New Orleans on August 29, 2005, resulting in an unprecedented cataclysmic natural disaster for the United States. But how “natural” was it? There are many nominations for the true sinister forces behind Katrina.

It wasn’t as if scientists and environmentalists hadn’t been warning city, state, and federal governments for years about the disaster of biblical proportions that was waiting to happen in New Orleans. Government gadflies had named New Orleans as one of the most vulnerable areas in the Bush administration’s continued neglect of the nation’s deteriorating roads, bridges, tunnels, and levees. Even the much-beleaguered Federal Emergency Management Agency (FEMA) had listed a hurricane strike on New Orleans as one of the most dire threats to the United States.

An article entitled “New Orleans Is Sinking” by Jim Wilson in the September 11, 2001, issue of Popular Mechanics warned that the surge of a category 5 storm could put the city under eighteen feet of water. The fact that the city had not already sunk, Wilson suggested, was strictly a matter of luck. “If slightly different paths had been followed by Hurricanes Camille, which struck in August 1969, Andrew in August 1992 or George in September 1998, today we might need scuba gear to tour the French Quarter,” Wilson commented wryly—and prophetically.

Robert Caputo and Tyrone Turner proved to be prescient in their October 2004 National Geographic piece when they described a “broiling August afternoon in New Orleans” when a “whirling maelstrom approached the coast” and “more than a million people evacuated to higher ground. Some 200,000 remained, however—the car-less, the homeless, the aged and infirm, and those die-hard New Orleanians who look for any excuse to throw a party.” The article, “Gone with the Water,” stated that with nearly 80 percent of New Orleans lying below sea level, the water would pour in and quickly reach a depth of twenty-five feet over parts of the city. Caputo and Turner foresaw as many as fifty thousand dead, a million left homeless, and thousands more who survived the flooding only to perish later from disease. The authors stated that a category 5 hurricane striking New Orleans would be “the worst natural disaster in the history of the United States.”

Although Katrina’s huge surge and pounding waves in New Orleans and to its east did cause the “worst natural disaster” in our nation’s history in terms of property damage, fortunately the death total did not reach the numbers predicted by Caputo and Turner. And the enormous outpouring of assistance from all areas of the United States, the aid of the Red Cross and civilian and religious relief organizations, plus the efforts of government health agencies, warded off a high mortality rate from disease. However, in spite of the indomitable spirit of its residents, it will take many years for the city to fully recover and once again become the “Big Easy.”

The winds from Katrina had scarcely ceased blowing when a wide range of theorists began fomenting and formulating a long list of conspiracies responsible for the terrible destruction that visited New Orleans. Among the most frequent accusations rampaging across the Internet and talk radio programs were the following:

Feedback
Flashcards & Bookmarks ?
Please log in or register to use Flashcards and Bookmarks. You can also log in with
Flashcards ?
My bookmarks ?
+ Add current page to bookmarks
Mentioned in ?
References in periodicals archive ?
Be inspired by the story of a community rebuilt after Hurricane Karina, a visionary and strategic regional approach in Florida and case studies from across the United States--all demonstrating that "community up" is an approach that serves not only older populations but the community as a whole.
Environments for Aging Conference preview: explore the future of senior living