An assumption regarding the behavior of light waves, originally proposed by C. Huygens in the seventeenth century to explain the fact that light travels in straight lines and casts sharp shadows. Large-scale waves, such as sound waves or water waves, bend appreciably into the shadow. The special behavior of light may be explained by Huygens' principle, which states that “each point on a wavefront may be regarded as a source of secondary waves, and the position of the wavefront at a later time is determined by the envelope of these secondary waves at that time.’’ Thus a wave WW originating at S is shown in the illustration at the instant it passes through an aperture. If a large number of circular secondary waves, originating at various points on WW, are drawn with the radius r representing the distance the wave would travel in time t, the envelope of these secondary waves is the heavily drawn circular arc W′W′. This represents the wave after t. If, as Huygens' principle requires, the disturbance is confined to the envelope, it will be 0 outside the limits indicated by points W′. 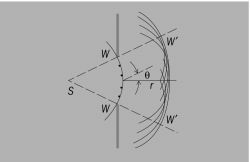 Huygens' principle: the construction for a spherical wave

Careful observation shows that there is a small amount of light beyond these points, decreasing rapidly with distance into the geometrical shadow. This is called diffraction. See Diffraction

[′hī·gənz ‚prin·sə·pəl]
(optics)
The principle that each point on a light wavefront may be regarded as a source of secondary waves, the envelope of these secondary waves determining the position of the wavefront at a later time.
McGraw-Hill Dictionary of Scientific & Technical Terms, 6E, Copyright © 2003 by The McGraw-Hill Companies, Inc.

Feedback
Flashcards & Bookmarks ?
Please log in or register to use Flashcards and Bookmarks. You can also log in with
Flashcards ?
My bookmarks ?
+ Add current page to bookmarks
Mentioned in ?
References in periodicals archive ?
Next we will include the boundary effects and obtain Huygens' principle for both scalar waves and vector waves.
Huygens' principle states that the wave field on a closed surface S can determine the field elsewhere.
Equations (64), (66) and (67) are various forms of discrete Huygens' principle for scalar field depending on the definitions of g(r, r').
Combining Equations (68) and (70), we can obtain the vectorial Huygens' principle:
Electromagnetic Theory with Discrete Exterior Calculus
Common to both works was the conclusion that an "incident optical wave is actually prevented from entering [a] crystal because of the modification produced in the field of the crystal by the introduction of a boundary." (76) In modern optics, the formal statement of the "Ewald-Oseen Extinction Theorem" is recognized as a special case of a "rigorous formulation of Huygens' principle," (77) and although not apparently recognised at the time by either researcher, is now readily apparent as a specific application of the memoryless Markov property for a wave-front mode of propagation.
Copson, The Mathematical Theory of Huygens' Principle, third ed., New York., Chelsea Publishing Company, 1987.
Enders, Peter, 'Huygens' Principle and the Modelling of Propagation', European Journal of Physics, vol.
Addressing the conflict between relativity and quantum theory: models, measurement and the Markov property
This is the equivalent of Huygens' Principle in optics, where light waves are assumed to propagate with the local velocity at the wave front.
The shape of the spherulite at the next time step is then determined using Huygens' Principle of growth of a front normal to itself with an instantaneous velocity determined by the local environment as follows: At each point, n, on the interface, a new coordinate system (denoted by [prime]) is defined with the following point, n + 1, as the origin and the x[prime]-axis as the line passing through the preceding point, n - 1.
Huygens' Principle 1690-1990, Theory and Application, H.
Growth of individual spherulites