[hī′drȯ·lik ′män·əd·ər]
(mining engineering)
A device for directing a high-pressure jet of water in hydraulicking; essentially, a swivel-mounted, counterweighted nozzle attached to a tripod or other type of stand and so designed that one worker can easily control and direct the vertical and lateral movements of the nozzle. Also known as giant; hydraulic giant; monitor.
McGraw-Hill Dictionary of Scientific & Technical Terms, 6E, Copyright © 2003 by The McGraw-Hill Companies, Inc.
The following article is from The Great Soviet Encyclopedia (1979). It might be outdated or ideologically biased.

an apparatus for creating and controlling powerful water jets capable of dislodging and washing out rock formations, ash, and slag. Hydraulic monitors are most widespread in construction and in open-pit and underground working of mineral deposits.

Hydraulic monitors were first used in Russia for mining gold in the Urals (1830); later (1880), K. F. Pen’evskii used hydraulic monitors made of canvas tubing and designed to operate under a pressure of 0.6-0.9 meganewtons per sq m (6-9 kilograms-force per sq cm) for washing out peat on the Nygri River.

A hydraulic monitor (see Figure 1) consists of a lower, stationary elbow joint and an upper elbow joint, which can rotate around a vertical axis because of a swivel apparatus. The barrel of the monitor can be inclined upward and downward from the horizontal by means of a ball joint. Water is supplied under pressure through a pipeline from a pumping station to the hydraulic monitor and, through a system of joints and hinges, enters the barrel, which has an angle of taper of 3°-5° in the direction of flow. The barrel ends in a nozzle, where the water jet is formed. The rock washed out by the jet is transported in the form of hydraulic fill either by gravity flow or by means of dredges. 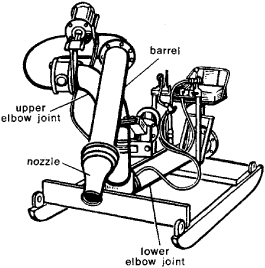 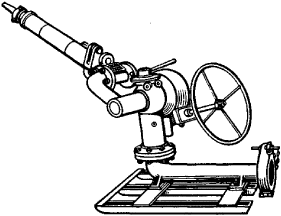 A device for directing a high-pressure stream of water; used for a variety of purposes, e.g., in cleaning a surface.
McGraw-Hill Dictionary of Architecture and Construction. Copyright © 2003 by McGraw-Hill Companies, Inc.