an aggregate of acoustic, electronic, and electrical instruments and devices that are interconnected by design and construction and are used for the reception or emission or the combined reception and emission of acoustic vibrations in water. The principal components of a passive hydroacoustic installation are the acoustic system (antenna), compensator, amplifier, and indicator system. An active hydroacoustic station also has a generator and a transfer device, or a “receive-transmit” switch.

The acoustic system of a hydroacoustic installation consists of many electroacoustic transducers (hydrophones for receiving hydroacoustic installations and oscillators for receiving-emitting hydroacoustic installations), which are used to obtain the required directional response pattern for reception and emission. Depending on the type and purpose of the hydroacoustic installation, these transducers can be located beneath the hull of the surface ship (mounted on a rotating-sliding device); installed in a stationary, acoustically permeable radome; or built into the outer planking (shell) of the vessel. They can also be mounted in a container that is either towed by the ship or lowered by a helicopter or on a stanchion on the bottom of the sea. The phase shifter introduces a phase shift into the alternating currents flowing in the electric circuits of the spatially separated hydrophones. This phase shift is equivalent to the difference in the arrival times of the acoustic vibrations at the individual hydrophones. The numerical values of these shifts indicate the angle between the axis of the directional response pattern of a stationary acoustic system and the direction of the object. After amplification, the electrical signals are transmitted to the indicating equipment (telephone or a cathode-ray tube), in order to fix the direction of the noise-generating object. The generator of an active hydroacoustic. system generates short electrical signal pulses, which subsequently are transmitted by the oscillators as acoustic vibrations. During the intervals between these pulses, the signals reflected from the object are received by the same oscillators (which during this time are connected by the “receive-transmit” switch to the electrical oscillation amplifier). The range, or distance, to the object is determined on the indicator from the delay time of the reflected signal relative to the directly transmitted signal.

Hydroacoustic installations, depending on their type and purpose, operate in the infrasonic, sonic, or (more frequently) ultrasonic frequency range (from tens of Hz to hundreds of kHz) and emit power ranging from tens of watts (for continuous generation) to hundreds of kW (per pulse). The precision of direction finding is from one degree to a fraction of a degree, depending on the method used (maximizing method, phase method, amplitude-phase method); on the sharpness of the directional response pattern, which is influenced by the frequency and dimensions of the acoustic system; and on the method of display. The hydroacoustic installations operate at distances ranging from hundreds of meters to more than tens of km and primarily depend on the installation parameters, on the reflecting properties of the object (the strength of the target), or on its noise-emission level, as well as on the physical phenomena of the propagation of sound vibrations in water (refraction and reverberation) and on the noise level of the hydroacoustic installation owing to the motion of its own vessel. 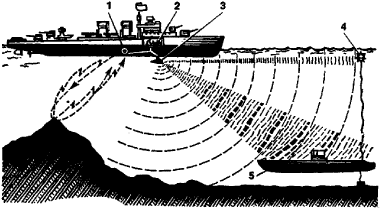 A hydroacoustic installation is installed on submarines, naval surface vessels (Figure 2), or in helicopters. It is also installed on land for antisubmarine defense, enemy reconais-sance, or communications between submarines and surface vessels. It can provide data for firing rocket-torpedoes or torpedoes or ensuring navigational safety. Transport, fishing, and exploration vessels use hydroacoustic stations for navigation, in searching for clusters of fish, for oceanographie and hydrological work, for communication with divers, and other purposes.