[‚hī·drō·ə′kü·stiks]
(acoustics)
underwater acoustics
McGraw-Hill Dictionary of Scientific & Technical Terms, 6E, Copyright © 2003 by The McGraw-Hill Companies, Inc.
The following article is from The Great Soviet Encyclopedia (1979). It might be outdated or ideologically biased.

a branch of acoustics studying the propagation of sound waves in a real aqueous medium (oceans, seas, lakes, and other bodies of water) with the aim of underwater location, communication, and the like.

An important property of underwater sound is low attenuation, which causes sound to propagate over much longer distances underwater than, for example, in the air. Thus, for audible sound in the 500-2,000-Hz frequency range, the distance of the underwater propagation of sound of medium intensity may be as high as 15-20 km, whereas in the ultrasonic range, the corresponding distance is 3-5 km. Based on attenuation values of sound observed under laboratory conditions in small volumes of water, considerably longer propagation distances would be expected. However, under natural conditions, attenuation caused by the properties of water itself (so-called viscous attenuation) is also accompanied by the refraction of sound and its scattering and absorption by various inhomogeneities of the medium.

The refraction of sound, or the bending of the sound ray’s path, is produced by the inhomogeneity of the properties of water, mainly in the vertical direction, owing to three basic reasons: a change in the hydrostatic pressure with depth, a change in the salt content, and a change in temperature resulting from the nonuniform heating of the water mass by the sun’s rays. The result of the total action of these factors is that the rate of sound propagation, about 1,450 m/sec for fresh water and about 1,500 m/sec for seawater, varies with the depth, and in this case, the law governing this variation depends on the time of year, the time of day, the depth of the body of water, and a number of other factors. Sound rays, having emerged from the source at some angle with respect to the horizon, are bent and, in this case, the direction of the curvature depends on the distribution of the velocity of sound in the medium (Figure 1). In the summer, when the upper layers are warmer than the lower layers, the sound rays are bent downward; most of them are reflected from the bottom and thus they lose a considerable part of their energy. Conversely, in the winter, when the lower layers of water retain their temperature while the upper layers cool down, the rays are bent upward and undergo multiple reflections from the water’s surface, during which there is a considerably smaller energy loss. For this reason, the range of sound propagation is greater in the winter than in the summer. As a consequence of refraction, the so-called dead zones (shadow zones, Figure l,a) are formed, namely, regions that are located not too far from the source and in which audibility is lacking. 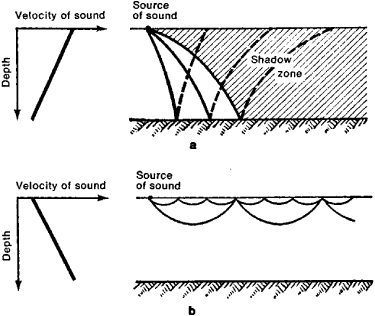 Figure 1. Refraction of sound in water: (a) in summer and (b) in winter. Change in velocity with depth is shown on the left.

The existence of refraction, however, may lead to an increase in the range of sound propagation—that is, to the ultralong propagation of sound underwater. At some depth below the water’s surface, there is a layer in which sound is propagated with the lowest velocity; above this depth, the velocity of sound increases owing to the increase in temperature, whereas below this layer, the speed of sound increases owing to increased hydrostatic pressure. This layer is a unique type of underwater sound channel. The ray, having deviated upward or downward from the channel’s axis, always tends to return back to the channel as a result of refraction (Figure 2). If the source and the receiver of sound are placed within such a layer, then even sounds of medium intensity (for example, explosions of small charges of 1-2 kg) may be registered over distances of hundreds or thousands of km. A substantial increase in the range of sound propagation with the presence of an underwater sound channel can be observed when the source of sound and the sound receiver are placed not only near the channel axis but, for example, at the surface. In this case, the rays, being refracted downward, reach the deep layers, where they are bent upward, and again reach the surface at a distance of several tens of km from the source. Further, the propagation pattern of the rays is repeated, which results in the formation of a sequence of so-called secondary illuminated zones, which can usually be tracked for distances up to several hundred km. The phenomenon of ultralong sound propagation at sea was independently discovered by the American scientists W. M. Ewing and J. Worzel (1944) and by the Soviet scientists L. M. Brekhovskikh and L. D. Rozenberg (1946).

Figure 2. Propagation of sound in underwater sound channel: (a) change in velocity of sound with depth and (b) path of rays in sound channel

The propagation of high-frequency sound, particularly of ultrasound, when the wavelengths are very short, is affected by small inhomogeneities usually present in natural bodies of water: microorganisms, gas bubbles, and the like. These inhomogeneities act in a twofold way: they absorb and scatter the energy of sound waves. Consequently, the propagation range decreases with increasing frequency of sound vibrations. This effect is particularly noticeable in the surface layer of water, which contains the greatest number of inhomogeneities. The scattering of sound by the inhomogeneities, as well as by the unevenness of the surface of the water and bottom, generates the phenomenon of underwater reverberation, which accompanies the propagation of the sound pulse: sound waves, being reflected by the totality of the inhomogeneities and merging, give rise to a delay in the sound pulse, which continues after its end in a manner similar to the reverberation observed in closed rooms. Underwater reverberation is a fairly significant source of interference for a number of practical hydroacoustic applications, particularly for sonar.

The range of the underwater propagation of sound is also limited by the so-called inherent sea noise, which arises from two sources. Some of this noise arises from the impact of waves at the surface of the water, from the surf, from the noise of rolling pebbles, and the like. Some noise is due to the sea fauna, including the sounds generated by fish and other marine animals.

Hydroacoustics has received wide practical application because (due to water’s electrical conductivity) none of the forms of electromagnetic waves, including light, are propagated in water over any appreciable distance, and, therefore, sound is the only possible means of underwater communication. For this sound frequencies from 300 to 10,000 Hz as well as ultrasonic frequencies from 10,000 Hz on up are used. Electrodynamic and piezoelectric emitters and hydrophones are used as emitters and receivers for the sonic range, whereas piezoelectric and magnetostrictive devices are used for the ultrasonic range. The most important applications of hydroacoustics include the sonic depth finders and sonar, which are used in the military (location of enemy submarines, torpedo attack without a periscope, and the like), for navigation purposes (navigation near rocks, reefs, and the like), to locate fish, in marine search operations, and so forth. A passive means for submarine surveillance is the noise hydrophone, which makes it possible to determine the direction of the source of noise, such as a ship’s screw. Underwater mines are equipped with so-called acoustical switches (detonators), which cause the mine charge to explode at the instant of a ship’s passage overhead. Self-propelled torpedoes can automatically guide themselves toward a ship by its noise.

Feedback
Flashcards & Bookmarks ?
Please log in or register to use Flashcards and Bookmarks. You can also log in with
Flashcards ?
My bookmarks ?
+ Add current page to bookmarks
Mentioned in ?
References in periodicals archive ?
1987: Hydroacoustic assessment of the abundance and distribution of rainbow smelt in Lake Oahe.
Diel distribution, migration and abundance assessment of Toxabramis houdermeri in Baise Reservoir, China
Brent Paul is a principal engineer in the Hydrodynamics and Hydroacoustic Signatures Group at Alion Science and Technology.
Noise control & acoustics division newsletter
An application of advanced oxidants and hydroacoustic cavitation to spent green sand and baghouse dust restores the binding activity of the clay and cleans the sand.
Reining in Costs, Controlling Emissions: Innovations in binders, coke replacements and advanced oxidation may decrease consum lotion and boost efficienc in ductile iron casting facilities. ROSE TORIELLI, FRED
Strigalev, "Method for eliminating the noise signal influence on the sensitivity of receiving hydroacoustic antenna based on fiber bragg gratings," Scientific and Technical Journal of Information Technologies, Mechanics and Optics, no.
Dynamic range analysis of the phase generated carrier demodulation technique
Specific emphasis will be on stealth, hydrodynamics, hydroacoustics and propulsion designs to permit technology insertion into current and future submarines.
Submarines
It is noteworthy for the future development of Chinese antisubmarine warfare that hydroacoustics has been called a "key point" technology for state investment.
Chinese evaluations of the U.S. Navy submarine force
The lab today is primarily science and technology-based, with leadership extending into research areas that include: acoustics; guidance and control; thermal energy systems; hydrodynamics; hydroacoustics; propulsion; materials and manufacturing; navigation; communications and information; and education.
The Applied Research Laboratory Pennsylvania State University and the Office of Naval Research--a strategic partner relationship
The successful results from this and other Bay Area projects led to the formation of the multiagency Fisheries and Hydroacoustics Working Group.
On the road to Environmental Excellence
In connection with the divestment of Simrad Yachting, Kongsberg Gruppen will also integrate Simrad Fishery into Kongsberg Maritime's hydroacoustics activities.
Kongsberg Gruppen ASA sells Simrad Yachting to Altor
Zooplankton and hydroacoustics. In: Richardson, W.J., ed.
Natural History and Conservation of the Greenland Whale, or Bowhead, in the Northwest Atlantic
Key words: Gulf of Nicoya, hydroacoustics, tropical fisheries, biomass estimation, estuaries.
Hydroacoustic estimation of fish biomass in the Gulf of Nicoya, Costa Rica
1981) and its abundance in the archipelago varies considerably (gill net catches combined with quantitative hydroacoustics, S.
The stable nitrogens isotope ratio as a marker of food-web interactions and fish migration