(also hydraulic turbine or water turbine), a vane-type motor that converts the mechanical energy of water (the energy of its level, pressure, and velocity) into the energy of a rotating shaft. Hydroturbines are classified according to their operating principle as impulse and reaction types. 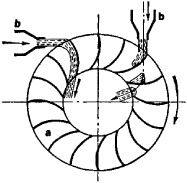 Figure 1. Diagram of an impulse hydroturbine: (a) rotor, (b) nozzles 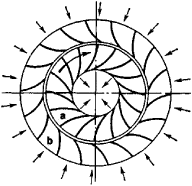 Figure 2. Diagram of a reaction hydroturbine: (a) rotor, (b) guiding device

In order to calculate the profile of a hydroturbine rotor blade that is turning at a constant angular velocity, the following equation is used (Figure 3):

where H is the hydroturbine’s operating head (the energy stored in 1 kg of water—that is, the difference between the water-level marks ahead of the intake to the structure of the power plant and at its outlet minus the loss to resistance in all the structures but not including the loss in the hydroturbine itself), U1 and U2 are the peripheral blade velocities at the rotor’s water intake and outlet, V1 and V2 are the absolute water velocities at the intake and outlet, α1 and α2 are the angles between the directions of the peripheral and absolute velocities at points corresponding to a flow surface averaged with respect to energy (in degrees), and g is the acceleration of gravity (in m/sec2). 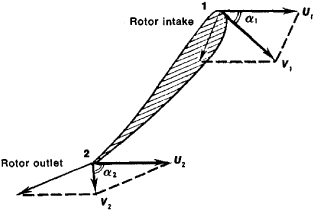 Figure 3. Velocity triangles at the intake and outlet of the rotor of a hydroturbine

The geometric dimensions of a hydroturbine are characterized by the nominal diameter D1 of the rotor. Hydroturbines of different sizes form a turbine series if they have the same type of rotor and geometrically similar elements in the circulating portion. After determining the required parameters of one of the hydroturbines of a given series, it is possible to calculate from similarity formulas the same parameters for any hydraulic turbine of this series. Each turbine series is characterized by a power-speed coefficient, which is numerically equal to the rate of the hydroturbine’s shaft rotation at which a power of 0.7355 kilowatts (kW), or 1 hp, is developed at a head of 1 m. The larger this coefficient, the greater the rate of shaft rotation at a given head and power. The cost of hydroturbines and electrical generators decreases as their rate of rotation increases, so that the tendency is to construct hydroturbines having the greatest possible power-speed coefficients. However, in reaction hydroturbines this is hindered by the phenomenon of cavitation, which causes the machine to vibrate, reduces the efficiency, and damages the hydroturbine. 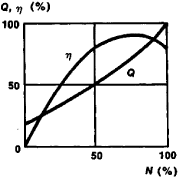 Figure 4. Characteristics of a hydroturbine with constant head and speed of rotation of rotor: ŋ is the efficiency, Q is the water discharge, and N is the load

On the universal characteristics (Figure 5), which are based on model testing conditions and have as coordinates the normalized variables of flow rate Q’1, in liters/sec, and rate of rotation n’u in rpm (which are typical for hydroturbines of a given series with a rotor diameter of 1 m operating at a head of 1 m), isolines are plotted for efficiencies of ŋ percent, cavitation coefficients ç, and openings of the guiding device a0.The performance characteristics (Figure 6) are constructed on the basis of the universal curves and show how the efficiency of a full-scale turbine ŋ percent depends on the load N (in MW) and the head H (in m) at a nominal rate of rotation n = const. A curve for the maximum power, which expresses the relationship between the guaranteed power and the head, is also usually plotted on this graph. Lines for equal permissible suction heads H8 (in m), which 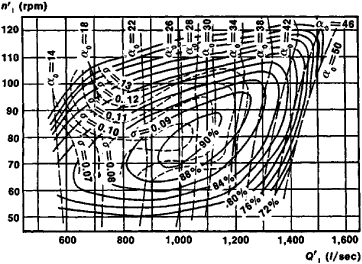 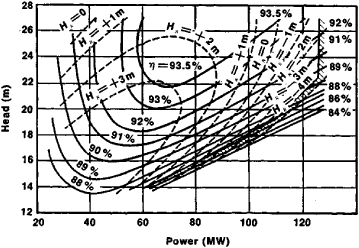 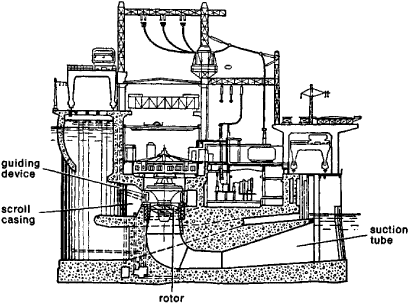 A method of classification for rotating-blade and radial-axial hydroturbines that provides a system of hydroturbine types and sizes together with their basic hydraulic and structural characteristics (see Table 1) was developed in the USSR in 1962. This system is based on the regular variation of the geometric and hydraulic parameters of the rotor as a function of the head.

The primary directions of hydroturbine developments are an increase in the unit power, the shift of each type of hydro-

Great advances in the design of hydroturbines have been made by Hitachi, Mitsubishi, and Toshiba in Japan; English Electric in Great Britain; and Voit in the Federal Republic of Germany. For example, the Japanese company Toshiba is designing hydroturbines with a unit power of 600 MW, a head of 87 m, and a rotor diameter of 9.7 m for the Grand Coulee III Hydroelectric Power Plant.

Feedback
Flashcards & Bookmarks ?
Please log in or register to use Flashcards and Bookmarks. You can also log in with
Flashcards ?
My bookmarks ?
+ Add current page to bookmarks
Mentioned in ?
References in periodicals archive ?
Considering the influence of the rigid water hammer and the no-load flow on the turbine model, a simplified analytical model of nonlinear hydroturbine was obtained [5,6].
Dynamics Analysis for Hydroturbine Regulating System Based on Matrix Model
It is well known that the hydroturbine system is the non-minimum phase system and is operated in a complex condition, constituted by controller and governor.
Nonlinear Dynamics of a PI Hydroturbine Governing System with Double Delays
Xide, "Dynamic model for hydroturbine generator units based on a database method for guide bearings," Shock and Vibration, vol.
Experimental Estimation of Journal Bearing Stiffness for Damage Detection in Large Hydrogenerators
The system will withdraw water from Llyn Padarn and it will then be released through a hydroturbine to generate power.
Huge hydro power plan submitted; DOUBLED SIZE TAKES CONTROVERSIAL BID'S FATE AWAY FROM COUNCIL
In the paper [2] torque and power of damless hydroturbine blades in the beginning of the dive and the possibility of their maximum values depending on the position of the blades oriented with respect to the axis of rotation of the hydroturbine were investigated.
Study of non-steady process in "single-acting piston pump--damless pitched-blade hydroturbine" hydrodynamic system
We also received a grant for a new hydroturbine that allows fish to pass through both ways unharmed.
Stuart A. Cain; President, Alden Research Laboratory, Holden
Allan Cook, managing director of Arlington Real Estate, said: "The hydroturbine is a great example of the innovative methods we are employing in order to achieve the highest possible standards of sustainability in this very important location."
It's a UK first for North East city
Li, "Effect of turbine characteristic on the response of hydroturbine governing system with surge tank," in Proceedings of the Asia-Pacific Power and Energy Engineering Conference (APPEEC '09), Chengdu, China, March 2009.
Stability analysis of a run-of-river diversion hydropower plant with surge tank and spillway in the head pond
The hydroturbine is able to generate enough power for wireless sensors, but it has a big size resulting in the difficulty of installing in pipelines and integrating with the sensor node.
Harvesting ambient environmental energy for wireless sensor networks: a survey
[13] studied the nonlinear dynamics behavior of hydroturbine governing system.
Hopf bifurcation analysis in a new chaotic system with chaos entanglement function
A HISTORIC hydroturbine is back in use 120 years after it was built.
Power plant back in use
Philip Ingersoll-Mahoney, Alternatives' director of administration and finance, points out that the project had some unanticipated costs, such as removing oil from the old hydroturbine pits as well as some structural issues.
A place for everyone: several years ago Alternatives Unlimited, Inc., had a big problem--a 32,369-square-foot problem to be exact