low, fleshy plant (Cryophytum crystalinum) of warm, dry, barren regions. It is cultivated chiefly as a curiosity because of its leaves, densely coated with small, glistening, bladder-shaped hairs. The ice plant and many other related herbs (e.g., New Zealand spinach), often with fantastic shapes, are sometimes combined in the genus Mesembryanthemum. They grow in abundance in South Africa, whence many had been introduced to European botanical gardens by 1600. Ice plants are classified in the division MagnoliophytaMagnoliophyta
, division of the plant kingdom consisting of those organisms commonly called the flowering plants, or angiosperms. The angiosperms have leaves, stems, and roots, and vascular, or conducting, tissue (xylem and phloem).
..... Click the link for more information. , class Magnoliopsida, order Caryophyllales, family Aizoaceae.
The Columbia Electronic Encyclopedia™ Copyright © 2013, Columbia University Press. Licensed from Columbia University Press. All rights reserved. www.cc.columbia.edu/cu/cup/ 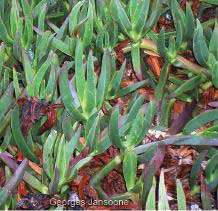 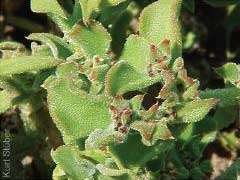 A very invasive edible creeping succulent that can grow to 150 feet across (50m). Leaves and fruit edible. Found all over the world. Flowers year round, colors yellow or bright red.

A very invasive edible creeping succulent that can grow to 150 feet across (50m). Leaves and fruit edible. Found all over the world. Flowers year round, colors yellow or bright red.
Edible Plant Guide © 2012 Markus Rothkranz
The following article is from The Great Soviet Encyclopedia (1979). It might be outdated or ideologically biased.

an annual plant of the genus Mesembryanthemum, of the family Aizoaceae. The fleshy leaves are covered with glistening vesicles, which create the impression of a solid coating of ice. The ice plant is native to southern Africa; it grows in the Mediterranean region, southern Australia, and the Canary Islands. It is grown as an ornamental. The leaves are used as salad greens.